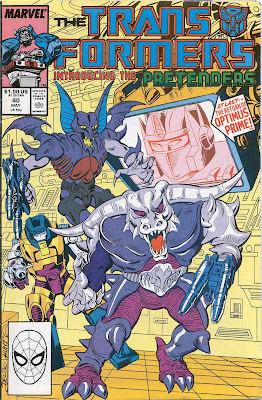 Pretender to the Throne! is the fortieth issue in the US G1 Marvel comic series.  As the series went eighty issues, that means I'm more or less halfway through the original run.  (A bit closer to more, now that all the mini-series are behind me, but less than the half of whole US Marvel continuity, since G2 adds in another 17 or so issues.)  The creative line-up is unchanged; Budiansky penned the tale, with Delbo pencils, Hunt inks, Oakley letters and Yomtov colors.  Once again, José Delbo and Dave Hunt draw the cover.

It's a pretty lackluster cover, though, unlike last month's offering.  We get a generic high-tech background, with three Pretenders in the foreground.  Two of them are fairly monsterous, and the other one may as well be a robot because we don't see anything organic about it.  It's Landmine, and presumably his face is obscured to avoid giving away the surprise, but then why not just do a third Decepticon Pretender?  Most significantly, Optimus Prime is on a giant-ass monitor, in a monochrome red to signify his computer-generated nature.  It all adds up to a big pile of who cares.  Delbo's robots are always fairly correct if not always dynamic, but I think he was a bad choice to emphasize the organic nature of these Pretender monsters.  While they're not the best idea in Transformers history, a cover full of monsters should be a slam-dunk, and sadly this is anything but.

The issue itself is somewhat uneven, most likely as a result of trying to serve two purposes.  It opens strongly enough, with a computer-generated Optimus Prime leading the mighty Mechabots of Hyperfax into battle against the brutal Bombasticons.  This, or some variant on this, would also have made a nice cover.  We soon learn that Ethan Zachary, who killed Prime himself back in issue #24, has indeed saved a copy of Optimus Prime's mind, personality and schematics.  He's built a whole computer gaming company around the idea of jumpstarting Prime's ego, making him believe he's more than just a video game hero.  Presumably it's taken some time for him to build an operating system around the core datafiles that make up Optimus Prime.  After all, it's very difficult to imagine that Optimus Prime's mind was an executable file able to run on a late eighties machine.

Ethan has recently unlocked Prime's memories of past associates.  Though he remembers leading the Autobots, he still puts all his past memories in the context of computer simulations. Even a newspaper article about Decepticons overrunning a genetics lab doesn't help. At Ethan's direction, Optimus tries to contact the Ark, but it's still missing.  Buster Witwicky proves a more fruitful lead.  With his name and location, Ethan contacts Sparkplug, who angrily brings the audience up to speed on the events of the last few issues and hangs up.

This is not quite the deadend Ethan fears, though, since Spike has bugged his dad's phone.  On board the not-quite-named-yet Steelhaven, the newly rebuilt Goldbug is skeptical about Optimus Prime contacting anyone.  He claims to have seen Optimus's lifeless body launched into the sun. Whoops! Goldbug must have watched a video of this, since he was blown apart by G.I. Joe at the time of the funeral.  Also, of course, the Matrix Quest plotline a few years hence will reveal that Prime's body has actually found its way to VsQs.  Two continuity glitches, one backwards, one forwards, in one panel.  Impressive.  Also, I just realized it, but at this point in the story Bumblebee/Goldbug has been completely destroyed and rebuilt twice ... both by humans.  Finally, I wonder why the rebuilt him as Goldbug again ... I thought that was just G.I. Joe doing the best they could.  Surely his own internal schematics are for Bumblebee, no?  In any event, with Fort Max still in the shop following the spanking Shockwave gave him, Goldbug goes down to Earth to investigate things.

Soon he's face-to-monitor with the virtual presence of Optimus Prime, who's looking forward to his next game.  They concoct a scheme to send Optimus into battle against REAL Decepticons, hoping that it will be more effective at helping his true personality to come to the forefront.  They hack into the genetics lab the Decepticons have occupied and send him on in.  I rather like the art for this sequence.  I mean, sure, it's silly, but it feels about right.  Optimus uncoveres Scorponok's most harebrained dastardly scheme yet.  He's going to coat his warriors with organic synthoplasm, making them look like horrible evil monsters.  This will allow them to ... surprise the autobots? ... umm ... operate undetected? ... ummm .... well, it's a scheme, anyway.  Optimus records the data and heads home, but he's been detected.

Optimus has analyzed the data and recommends that Ethan create six new characters to mount an effective counterattack.  He also urges haste, as the Decepticons may have traced him.  Goldbug and Ethan are considerably more perturbed by this prospect than he is, since it's all just a game to him.  Goldbug points out the futility of 'making six new characters,' but Ethan thinks that Prime's initiative should be encouraged.  And so, in short order, six new Autobots we've never seen before are being turned into Pretenders, which really must be a VERY easy process given the complete lack of lead time. 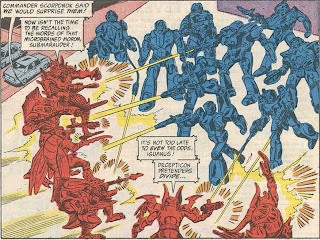 The time is set for battle! Optimus goes back into the digital realm, as bait.  Scorponok inputs his brain into the computer while sending his Pretenders to Ethan's lab.  First they get to demonstrate their weapons on RAAT, in what is I believe their last appearance.  Then they travel to the game company and are surprised to see six giant humans.  The humans pretend to retreat for all of about ten seconds, then turn around and counter attack.  Guh?  With Goldbug as his eyes, Optimus directs the battle.  Naturally, the Autobots do very well.  There are hiccups, such as when Goldbug's optics malfuction (hey, it's a new body, cut him some slack.)  Optimus and Scorponok have their first encounter here in the virtual world.  Prime emerges victorious, naturally, as do his men.  They gather around his screen, and Optimus can feel a change!  He knows now what it is to be a warrior, a leader.  It's something he'll never forget!  Never!

So, he asks, when do they start the next game?

It's a very satisfying ending, at least.  All that and Prime still thinks he's nothing but a game character, albeit a very good game character.  Ah, the wry irony of it all.

The title, too, is clever, if perhaps a bit obvious.  It works on more than one level, though, which is nice.  After all, Grimlock and Fortress Maximus are the nominal Autobot leaders, but here we have a possible supplanter to them in the form of this CG Prime.  Then again, maybe it's Grimlock and Fort Max who are the pretenders.  Neither one of them has a completely legitimate claim.  Fort Max is basically Spike, a human to took the place of the former Autobot leader.  Grimlock, well, he was elected leader but then swiftly began to abuse his authority.

Unfortunately, the internal logic of the story is pretty weak.  Scorponok's Pretenders DON'T look like Decepticons, it's true, but they DO look like 30 foot tall monsters.  Really, who's that going to fool?  They might have gotten, one, maybe two raids in before the Autobots realized what was up. And Prime's plan is just as ridiculous.  If it didn't work, I'd have said it's because his addled brain thought in video game terms, but since it did work it just seems contrived. 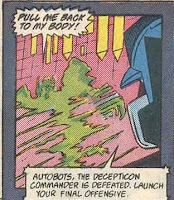 I like the conceit of Prime not realizing that he is a real being. It's a fun direction to take the character, and seems very in keeping with the method of his resurrection.  Still, a floppy disk containing his brain AND schematics? Seems hard to believe.  I also like how some of the scenes in the virtual realm use an extra border to separate them from the main action.  It properly distances them from the 'reality' of the main story; a subtle, but well executed, touch.

There is good in here, but it's hard to find.  Ignore all the extraneous elements and you get a pretty good tale about what it means to be sentient.  Budiansky seems hampered by the introduction of twelve new characters.  The Prime plot is fun and interesting, but everything else seems like a distracting sideshow.   For a tale that gets Pretenders right, see the four issue Revelation series from Furman, some two decades on.  Of course, he was under far different creative constraints than Budiansky. Still, when a story doesn't work, it doesn't work, and sadly this one doesn't.

Next  issue, we're promised "The Battle You Demanded! Grimlock vs. Blaster! (and about 100 more Transformers dukin' it out, too!")  That sound just awesome! Grimlock's been missing from the comics since issue thirty-six.  That's five months of wondering exactly what happened to the Earthbound Autobots.  This gap is exactly the opposite of the Pretender weakness above.  Here Budiansky has taken the opportunity presented by the arrival of the Headmasters to move our former heroes off-stage and allow the tension to build.  We even see that the absence of the Autobots has allowed Ratbat and Shockwave to operate unhindered, building for themselves a might space vessel.  It was a very shrewd move on Budianky's part, and we'll see how well he exploits it now that the payoff is finally here.  I'm looking forward to it.  Pretender to the Throne!  is available in IDW's  Classic Transformers Volume 3 from Amazon.com.
Posted by Jimtron at 2:11 AM

I thought G2 was just a solid 12 issues. 13, if you count the Halloween special?

Well, I'm counting the G.I. Joe prequel to G2. Megatron came back, mucked around with COBRA and got himself a new body. It was a fun little tale.

I didn't like this issue much, but i think it is because the Pretenders was such a weird idea to shoehorn in Transformers continuity and also because we are now getting into the Bob overload where he has to add more characters so often.