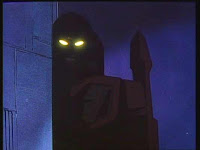 It has been quite a break since I last reviewed an installment of the Takara "Headmasters" series, but now I aim to dive back in and reach the series finale unobstructed – wish me luck! The opening ten episodes of "The Headmasters" form their own mini-arc, introducing the new cast of characters while moving the old cast off-stage in both subtle and not so subtle ways. With the surprising destruction of Cybertron, this series can now explore its own path without having to emulate its US G1 predecessor as much. This of course can be simultaneously interesting and frustrating for long-time fans, but there is still much fun to be had here, especially as we advance into the subsequent story arcs.

On Athenia, Arcee, Daniel and Wheelie are mourning the loss of Cybertron and missing Rodimus, who departed with Kup and Blurr to find a new home for the Transformers and left Fortress in charge in his absence. To help lift everyone's spirit a party is thrown, during which Spike announces the launch of a joint Earth/Cybertron energy-collecting solar satellite. In addition, there is the odd sequence of Wheelie chugging energon wine and Hardhead singing karaoke to the series theme song, the latter of which provided for me the biggest belly laugh in Chromedome's wry observation!

Meanwhile on Charr, Soundblaster, Sixshot, Cyclonus, Scourge and the Headmasters presume Galvatron has met his ultimate fate, being trapped in the center of Cybertron when it exploded. From the shadows, Zarak plays a brief prank on them all by appearing as Galvatron, but then informs that their Decepticon Emperor is still alive. Zarak says he has been instructed to lead for the time being. All except Soundblaster are dubious of this claim and who can blame them?

Zarak: You are to obey my orders as though they were from Lord Galvatron.
Cyclonus: Soundblaster! Should we believe him?
Scourge: What, believe Zarak?
Soundblaster: I am Lord Galvatron's representative. You have no choice but to believe it.

On Earth, the preparation to launch the solar satellite has been spied by Ratbat, who reports back to Charr. Cyclonus and Scourge decide that they will need to prove their worth to Zarak, in order to compete with the sycophantic Soundblaster, and secretly recruit the Predacons to help them destroy the satellite. They fail miserably thanks to the efforts of the Trainbots, Chromedome, Hardhead and Brainstorm, allowing the satellite to launch successfully.

Back on Charr, Zarak is meeting with his Headmasters, informing them of his findings regarding the solar energy collector. It will generate and store enough power to add to Zarak's transtector body, still being constructed, and so they immediately proceed on a mission to steal the satellite. The Autobots' efforts to stop this nefarious deed is thwarted by a surprise attack on their HQ by Sixshot. Chromedome is injured. However, all is not lost as Fortress, correctly deducing that the satellite was not brought to Charr, calculates its new destination as being a mysterious body of gas in a black nebula.

Chromedome, feeling personally responsible for the recovery of the satellite, leads his team to retrieve it from the edge of the nebula. Following a fierce battle with the Decepticon Headmasters, the satellite sends its collected energy into the nebula where it is then received on a dark planet within. We see a very large, shadowy shape lit by this influx of energy, an ominous shape that is missing a head.

Meanwhile, Weirdwolf taunts the Autobot Headmasters by telling them they cannot return the satellite to Earth orbit without destroying it, as a telepathic link will instruct it to detonate. Chromedome is torn about the next step but reluctantly decides he will destroy the satellite himself. Once back on Earth, he apologizes to Spike, yet is assured that relations between humanity and the Autobots is undamaged. Fortress looks on, concerned and lost in thought, fearing something terrible will result from the energy sent into that nebula.

This episode begins a short arc during which Zarak takes full command of the Decepticons and uses them only to gather energy for his newly constructed, giant transtector body, that being Scorponok. We also see the paralleling shift in power dynamics on both sides, Autobot and Decepticon, as established, home-grown leaders are removed and replaced by outsiders. Fortress plays only a small role here, but he will soon show himself to be the perfect Autobot leader for this moment, due to the years he spent stranded with Zarak on Planet Master. This experience grants him a special insight beyond what Rodimus or even Optimus could access.

Zarak continues to ignore or simply patronize all Decepticons except his own team of Headmasters. He could prove to be a greater threat to the galaxy than Galvatron because of his lack of loyalty to either side or even to the Transformer race in general. This makes Zarak quite an interesting villain to watch. In addition, there is much distrust and disunity among the Decepticon ranks overall, as Soundblaster smartly aligns himself with Zarak, Cyclonus and Scourge clumsily aim to gain favor and Sixshot secretly spies on them all, seemingly content to play rogue. I guess I would feel a similar arrogant aloofness if I was a ninja with six alternate modes! Meanwhile, Chromedome shows his youthful eagerness to personally invest himself into everything, but without much consideration for consequences to himself or those around him, a fault which might cause trouble shortly.

All in all, an okay episode with some nice bits of humor and characterization, with an twist on the old energy collecting plot device, a staple of the G1 universe. Here collecting the energy is a means to an end, not the goal itself, but merely a stepping stone to help lay the groundwork for Zarak's grand plan. The episode is a step down from the massive action and game-changing events of the preceding two-parter, but it sets the stage for the next escalation in the conflict.
Posted by Brian at 7:19 AM

Awesome to have you back, Brian. Your timing couldn't be better, since I just posted the model sheets for the Solar-1 satellite a few weeks back.