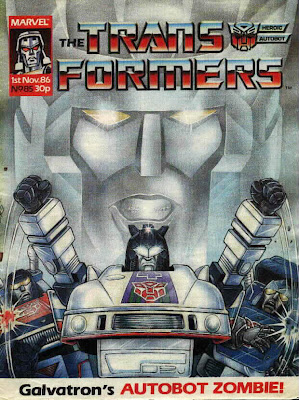 Target 2006 Part 7 was written by Simon Furman, pencilled by Will Simpson, inked by Tim Perkins, lettered by Richard Starkings and coloured by Tony Jozwiak.

The cover is by Will Simpson and is fairly uninspiring. The caption reads "Galvatron's Autobot Zombie!" and a very stiff Jazz is depicted very stiffly knocking out Tracks and Bluestreak. Apart from the looks of shock on their faces these characters too are almost lifeless and it's very strange to have all three looking straight at the "camera". Very awkward composition. Galvatron's face oversees all of this and it's a perfectly adequate rendering, I suppose but he stares fairly blankly with mouth open when one would have expected him to be laughing or at least smirking at getting one over on the Autobots.

We open with the Decepticon Starship from the very first issue getting vaporised by Galvatron's experimental anti-Unicron cannon. Galvatron decides that this one test on a much smaller object is enough and that he and his band can return to 2006 once the weapon recharges. Why he has to wait for a weapon to recharge now that he needs in twenty years time isn't entirely clear, but presumably it needs to be fully charged before being concealed beneath the ground, and, eventually, Autobot City.  Galvatron makes a big show of indulging Starscream partly because he has potentially useful information, but mostly because he finds it amusing to allow the devious Decepticon to believe that he is his root to power when, from Galvatron's perspective, Starscream is already dead, at his hand.

Meanwhile, back at the Ark, Ultra Magnus is getting nowhere in his quest to solve the mystery of Prime's disappearance. While he is feeling sorry for himself the three future Autobots, Kup, Hot Rod and Blurr show up. Hot Rod does not know his history and thinks Magnus has the Matrix of Leadership (pretty bad given this is twenty years ago for him - a being who's probably millenia old by now). Kup sets him straight and introduces them, before going on to explain to Magnus that they are looking for a Decepticon called Galvatron.

Galvatron, however, is now personally handling the exchange of the captive Jazz for Scourge. The Autobots have Scourge in a set of "anti-grav" manacles which are programmed to fry him if he puts a foot wrong. This could have been a pretty good image if Will Simpson ever gave the impression that he cared about what he was doing.  While this takes place, Megatron is sneaking into Galvatron's base when he is caught by Cyclonus. The future Decepticon is once again betrayed by his lack of intelligence and is knocked out by Soundwave while crowing over Megatron. However, they reckon without Starscream, who takes them by surprise and blasts Megatron in the back.

Back at the Ark Kup is explaining to Ultra Magnus the way that time travel devices displaces beings of similar size and mass from the target time, explaining the disappearing Autobots. It shifts them into a pocket dimension between realities that leaves them unharmed. As soon as Magnus realises that Galvatron and the others are responsible for the disappearance of the Autobots he takes off at great speed, not allowing Kup to finish. 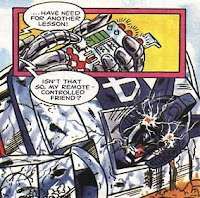 The Autobots are baffled by why Galvatron went through with the prisoner exchange but are soon shown the reason. Jazz has been modified by Galvatron and is now a remote control puppet. To give Simpson his due, the image of Jazz, slack jawed, with his eyes burning red and his mouth spewing energy (for some reason) is genuinely well realised in a horrifying sort of way. Jazz leaps up and starts battling the Autobots, taking Jetfire down very hard.

Galvatron has taken advantage of this distraction to slope off, arriving just in time to stop Starscream executing Megatron (and with him, Galvatron's future). He backhands Starscream to the ground and begins to rant about how no-one can stop him before Ultra Magnus arrives and picks up the gauntlet. To be continued...!

Scriptwise this issue is mostly great. While I am not entirely certain that the zombie-Jazz subplot is all that necessary it gets the job done by giving the Autobots a reason not to just attack Galvatron in force at his base (other than the pasting they received last time, of course). I like that the Megatron/Autobot alliance is still intact and that they are providing cover for him to use his more warlike skills to infiltrate Galvatron's stronghold. Having Soundwave back Megatron up is good characterisation as the Decepticon is well-known as a sycophant, but also an incredibly sneaky one.

Ultra Magnus solves the mystery of Prime's disappearance by... waiting around until someone from the future tells him the answer... This isn't the most inspiring of reveals but does lead us to the awesome final panel where we know that the Magnus/Galvatron confrontation is going to be massive in the next issue.
The characterisation of the future Autobots is spot-on, although they haven't done much apart from impart information so far. You just know they're here for a reason though, and it'll be fun to see how they get used. 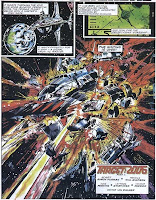 Simpson's art is, unfortunately, still not to my taste. I would like very much, however, to see his original line drawings. I feel that the way he draws the robotic characters would still feel wrong to me, but I might be able to appreciate some of his subtlety. Perkins seems to delight in hiding the pencilling behind a storm of ink that obscures details, blurs lines and makes some of the more detailed panels look like a total mess.

A very fast, very packed issue that is obviously building towards a climax, now that the two strands of the story have been linked together.  IDW's trade of  Transformers: Target: 2006

is available from Amazon.com.
Posted by Bishbot at 4:44 PM

Artwork notwithstanding, I really enjoyed this issue. The destruction of the old Decepticon spaceship felt like a big deal to me (even though its existence was never alluded to before or since in the comics – the design looks like the cartoon version, and I’m not sure we even saw the Decepticon’s ship when they attacked the Ark in Issue #1 – so credit to Furman for thinking of it), especially as it was a fairly capricious act by Galvatron.

I also though ‘zombie Jazz’ was particularly disturbing, and liked the ‘revolving door’ of characters showing up at Galvatron’s base, only to get knocked out (to be pendantic: Cyclonus was only distracted by Soundwave, he was actually knocked out my Megatron – I remember it because the punch was drawn so dramatically).

One complaint I would make with this issue: during Galvatron’s conversation with Starscream (great that he had his arm around him in faux-chummyness – a shame we didn’t see more of this deliciously evil – as opposed to full-on insane – Galvatron) he refers to Starscream showing up at his base, and Cyclonus (who presumably has no love for the transformer who threw him into space) beating him up. This obviously happened between issues, but I think it would have made a great scene – Starscream showing up all smiles and treachery, only to get deservedly clobbered, only not knowing why.