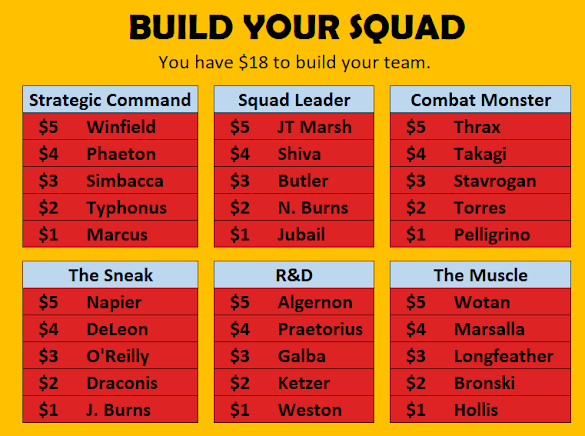 I dig these kind of games. Always fun to go bargain hunting, or see if you can make your favorite team for the right price. So I made one for Exo-Squad. Enjoy!

Posted by Jimtron at 8:07 AM No comments:

I love Seanan McGuire’s books - she is one of my favorite authors, hands down, and for good reason -she consistently writes numerous excellent, honest, and fun books every year.  I was thrilled when DAW and NetGalley gave me an eARC of her newest Incryptid novel, Calculated Risks, which is the tenth novel in the series.  In order to get ready for it, I binge read books 7, 8, and 9 immediately beforehand.  Calculated Risks was fantastic, but there were a few things about it that gave me pause.  Spoilers to follow.

To recap, the Incryptid series involves a family of cryptozoologists that work to protect the natural diversity of the hidden world. Every few books, the point of view narrator shifts to another member of the same family, which has the added benefit of keeping the series fresh and invigorated. Books 9 and 10 are told from Cousin Sarah’s POV.  Sarah is from a species of selfish telepathic wasps, more or less, and book 9 ended with her saving the earth while simultaneously transporting an entire college campus to another dimension, during which she also erased herself from the memories of the family members that she was with. The logical result of that was that the first half of the book consisted of family members angry and yelling at each other while confined in a small space, which was not exactly what I was looking for in escapist reading during the pandemic.  Once the characters rebuilt some trust with each other, the story became more fun and enjoyable to me.  The adventure in the other dimension was interesting, but some things felt a little too convenient, and I would’ve preferred to spent more time exploring the other dimension and less time with the early chapters’ squabbling. Finally, at the end of the novel, Artie, one of my favorite characters, allows his mind to be wholly erased in order to save everyone and get them all home to Earth, leaving his body a shell.  Sarah is then able to “restore” his mind from his parents’ memories, his sister’s memories, and Sarah’s own memories, and whatever amount of Artie’s psyche was shared with Sarah through her telepathic bond.  However, based on everything explained in an earlier chapter about how Sarah reconstructed a memory of one of Artie’s childhood birthdays, this restoration could not have fully worked - the Artie that was “restored” could not possibly be the Artie that existed before, and it felt like that was ignored in favor of a happy ending.  It reminded me a bit of the Illyria plot in Angel when Fred was killed and replaced.  I assume that this will be dealt with in a future novel or short story, but it left me feeling unsatisfied.  I don’t want anyone, however, to take this critique as meaning that I didn’t like this book. I loved it! But I was bothered by these things.

Posted by Harrison at 8:28 PM No comments:

The Galaxy, and the Ground Within by Becky Chambers

I cannot tell you how much I loved this book. I have never used the following word before, but I believe it is appropriate here: squee!

I first learned of Becky Chambers when someone from my science fiction book club picked The Long Way to a Small, Angry Planet for their selection. It bowled me over with how much I loved it. That book was everything I want from Cozy science fiction. I love the characters, setting, just everything about it. I eagerly anticipated and immediately devoured the next two Wayfarers books when they came out and I was thrilled when she won the Hugo for best series. So I was both delighted and dismayed when I saw that this book was announced as the last book she planned for this universe.

The plot of this book is not the point of this book. If I were to describe the plot, I would say that a bunch of different aliens end up stuck at a space  truckstop and end up getting to know each other. As they get to know each other, we get to know them, their worlds, their cultures. And it is a pure joy. I cannot thank NetGalley and the publisher enough for an advanced reader copy of this book. It was my most anticipated release for 2021 and I am so thrilled that I got to read it early.

If you’ve never read a book in the series before, you could easily start here if you wanted to. The author doesn’t repeat some of the world building nuggets that you learned in earlier books, but they’re not necessary to enjoy this novel. For fans of the first three, you will be happy to see a minor character from the first book get a larger role here. I don’t want to spoil who it is because of the pleasure I had in realizing it myself.

This book was practically perfect in every way and everyone should get themselves a copy as soon as it’s available. Again, I say: Squee!

Posted by Harrison at 4:52 PM No comments: