I recently started collecting Astromech droids. I've never been a giant Star Wars fan. Sure, I loved it growing up, but I never really got into the fandom aspect if that made sense. Most of the EU stuff didn't grab me, and, while I didn't hate the prequels like some, they failed to recapture the magic of the original trilogy for me.

So what changed? I started watching The Clone Wars. Excellent, excellent show. It does a great job of conveying that the Clone Wars was really a protracted series of nuanced conflicts. And me, being a toy guy, started looking at Star Wars toys for the first time in a long time. But what to get? There are just too many Star Wars toys out there to have any hope of getting them all. Do I do just main characters? Do I get vehicles? Maybe just one scene, like a giant Hoth diorama?

And then I remembered my favorite character, R2-D2, and saw all of the neat versions of his brothers and sisters out there. And there were a lot of them. I did my homework, found groups like The Astromech Collection, and neat checklists like Astromech Arithmetic. This made me realize that even here I needed some rules. Rule 1: one of each character. Since some droids don't have any official designation, to me a character is a unique dome and a unique body. The unique body could just be a simple shading variation, but I tried to avoid having two identical guys. This has resulted in a very small number of named droids I've skipped, like R5-D8 (functionally identical to R5-D4) and CB-3D (very similar to several other red on white R2 type droids.)

I seeded the collection with the complete Disney Droid Factory set. There are multiple ways one could do this, but I got a complete set of all 25 unique domes and appropriate bodies to go with them. Given that I wanted all unique bodies, this necessitated some limb swapping. But some of the colors just weren't working. There were 3 purple domes but only one purple body and one pair of purple legs. Red and green had two bodies and two legs each, so I could swap around to keep things looking different. Blue had three bodies and two pairs of legs, so even more flexibility there. So, where could I turn? Build-A-Droid, that's where.

I quickly decided to make an exception to my Only-One-Of-Each-Character rule. I fell in love with the concept of the modular droids that are the Build-A-Droid (BAD) toys. So, if there was a BAD and a non-BAD version of a character, I got each. The non-BAD became my canon version. The BAD got mixed and matched with my other BAD guys. Fortunately every dome was at least a little different, sometimes very different. This helped me solve my problem of awkward colors (orange legs on purple bodies... ugh!) to my aesthetic standards. I also cobbled together a body for Yoda's droid this way. (Yoda's starfighter came with a dome but no body. I used white with black highlight legs from the Disney Droid Factory and the torso from the BAD version of R3-A2.)

And it all snowballed from there. Here are some shots of my various droids, for your viewing pleasure and mine.


Lots o' R2 Units in there. There are a few where there are two droids of the same name, but in each case the color scheme is different enough to make them completely separate in my mind (and, of course, require a new designation.) There are a green and a black R2-X2 (green one becomes R2-X3 for me) and the completely silver R2-D2 (now R2-S5).

R3 are probably my least favorite of the canon droids. I like the idea of the clear dome, but the toy execution generally leaves a bit to be desired. I generally like the BAD versions better than the non-BAD versions. Much of that is the sculpt, but some comes down to the color schemes.

R4 Units are pretty nifty. Gotta love the coneheads. I really like the execution on these guys. R4-J1, R4-A22, and the green (as opposed to teal) R4-M9 are probably my favoities. (R4-M9 is another droid where there are two with the same name but completely different color schemes.) I think my Disney Factory blue R4 unit (R4-K2 in my personal canon) came out rather nicely. If I were to ever attempt to build a full-sized Astromech, I suspect I'd wind up going with a droid of this type.

R5 units! Many of them have bad motivators. That actually gets to a stylistic choice I've noticed about the Star Wars Expanded Universe that kind of bugs me. There will be one aspect of a character or planet that we see in the films, and then in the EU we find out that this is basically all they're known for. While I was researching my astromechs, I found that R5 units are known for being shoddy and unreliable. Because the only one we saw really do anything was R5-D4, which blew a motivator after Uncle Owen tried to buy him. But that doesn't quite work for me, because we see them all over the place. Imperials use them, rebels use them... if they were so bad, why wouldn't folks use something else? 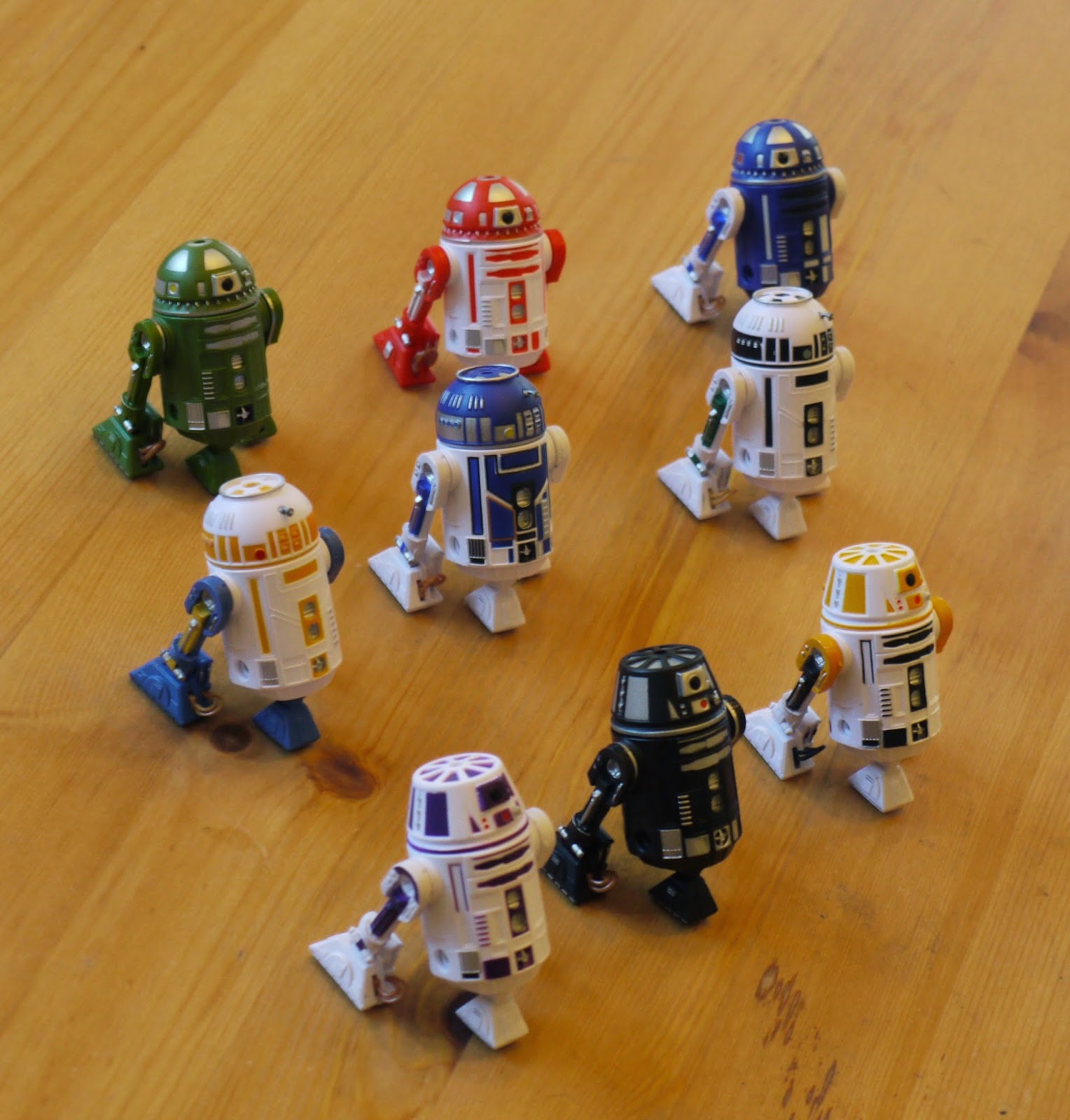 And now the expanded universe.  Here are the R6s in front, R8s in the middle, and R9s in the back. All came from the Disney Droid Factory, though I did swap in a few legs for variety here and there. The R6 units are my favorite. I can easily see them roaming around an Imperial ship (especially the black one), or aiding a rebel pilot in his duties. 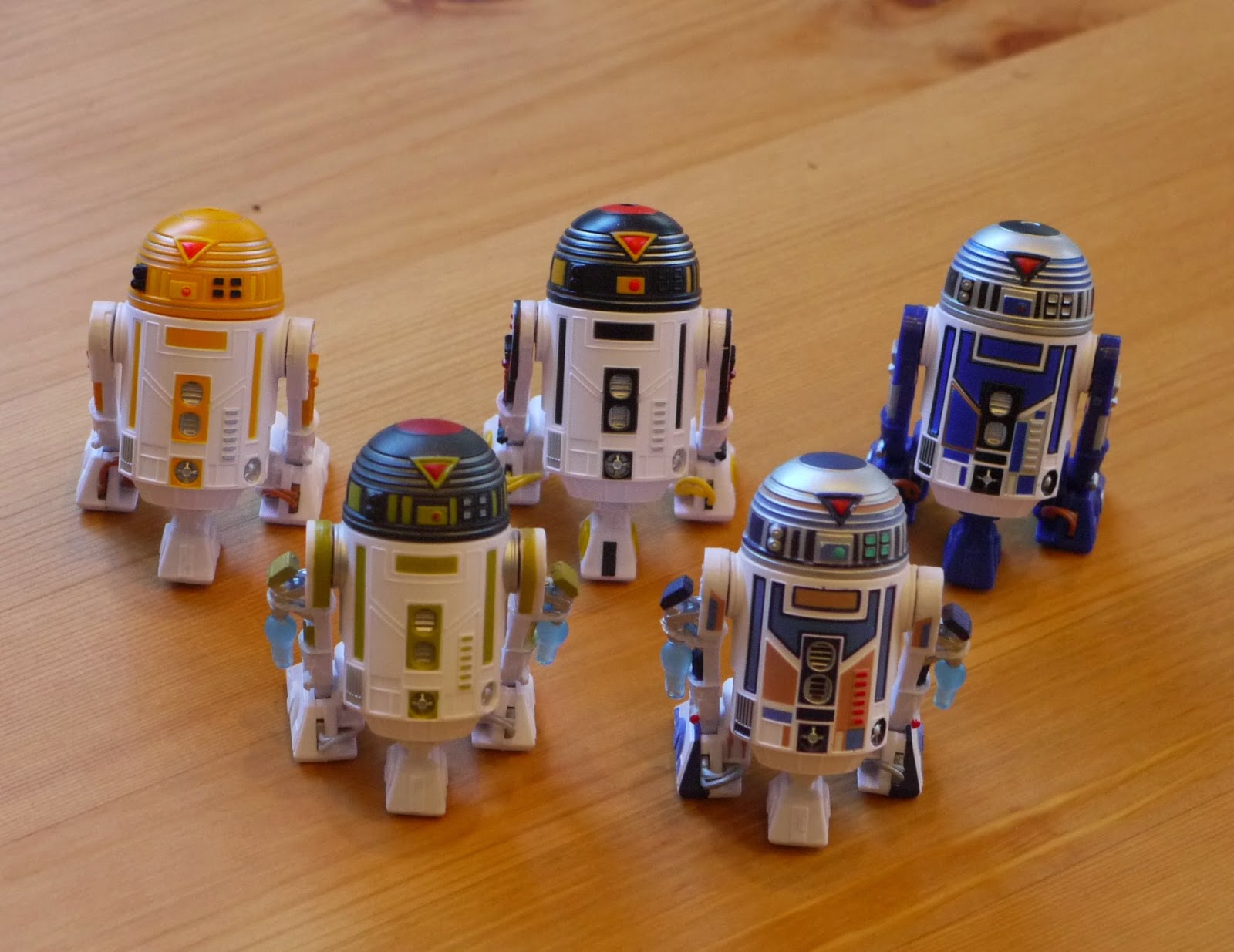 The R7 droids are probably my least favorite. I don't care for the triangle lenses, and the redesigned body is not my favorite. The two with rockets were BAD versions packaged with other toys. (This body style was used for the R8 bodies as well, though by R9s they've returned to the more traditional body.)

And, a few more, sorted by color for your chromatic pleasure. Observe how, though some guys are fairly similar, no two are identical.

Hope you enjoy my 87 Astromech droids! 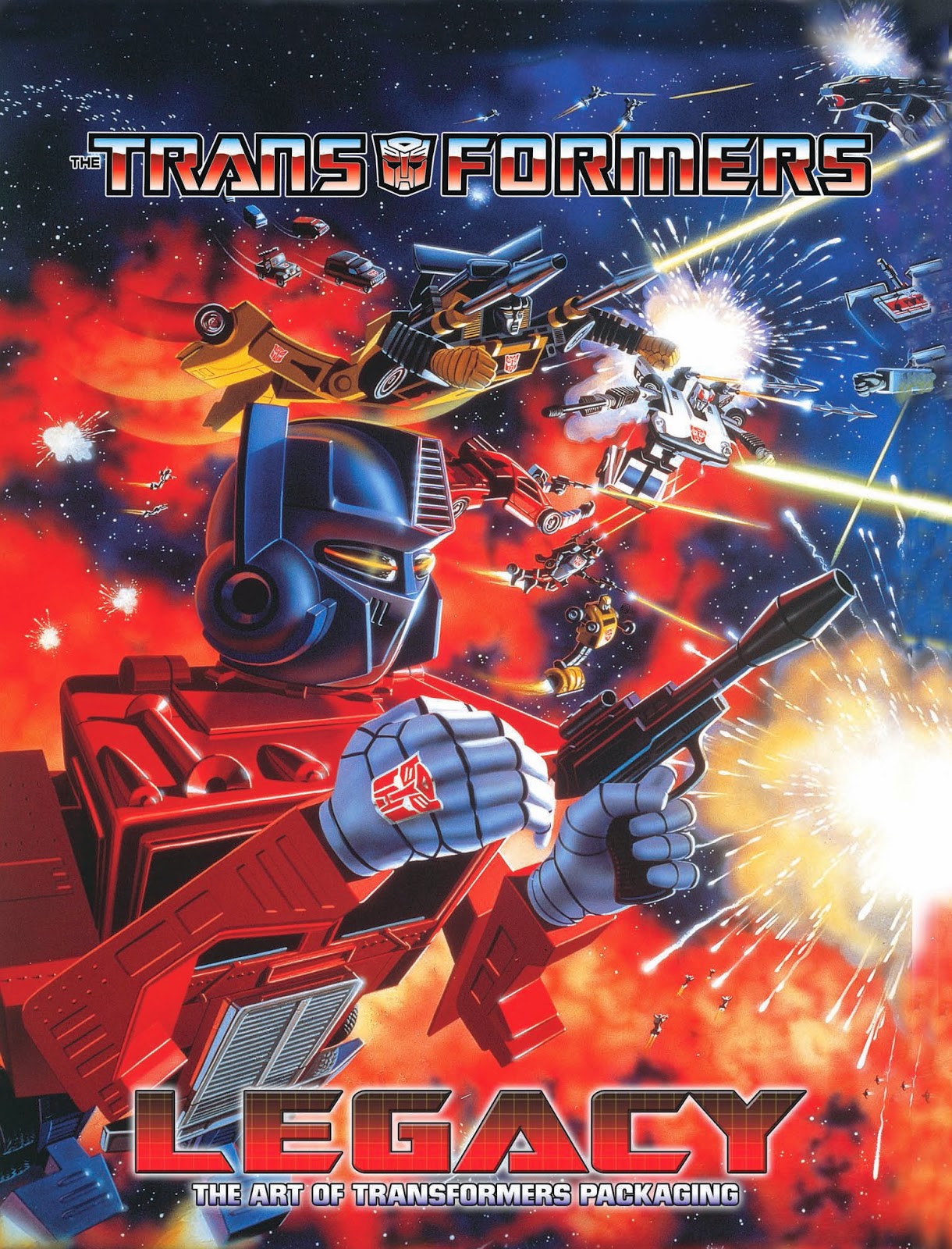 Well, we ran into a few delays on the backend and didn't make out initial target of late May / early June. But, Legacy is out, and it's beautiful! It wound up clocking in at just under 300 pages. Also, at the last minute we had to pull out much of the material we'd gathered on the artists. Still, overall the production value on this is just amazing.

But don't take my word for it! TFormers did an excellent review, thorough and hit all the important beats:
http://tformers.com/reviews.php?op=showcontent&id=1543
Highlight: " I spent an hour on my first browsing of Legacy, and was surprised again and again by the amazing things I found contained within. Whatever expectations I had for this were completely surpassed by the final product."

Here's what Ruel of the Philipeans had to say: http://officialtransformersph.blogspot.com/2014/10/the-total-package-transformers-legacy.html
Highlight:  "I waited all year for this book—and it did not disappoint. Go get it."

Here's a video review that goes through each and every page!
https://www.youtube.com/watch?v=e06hAVthwR4 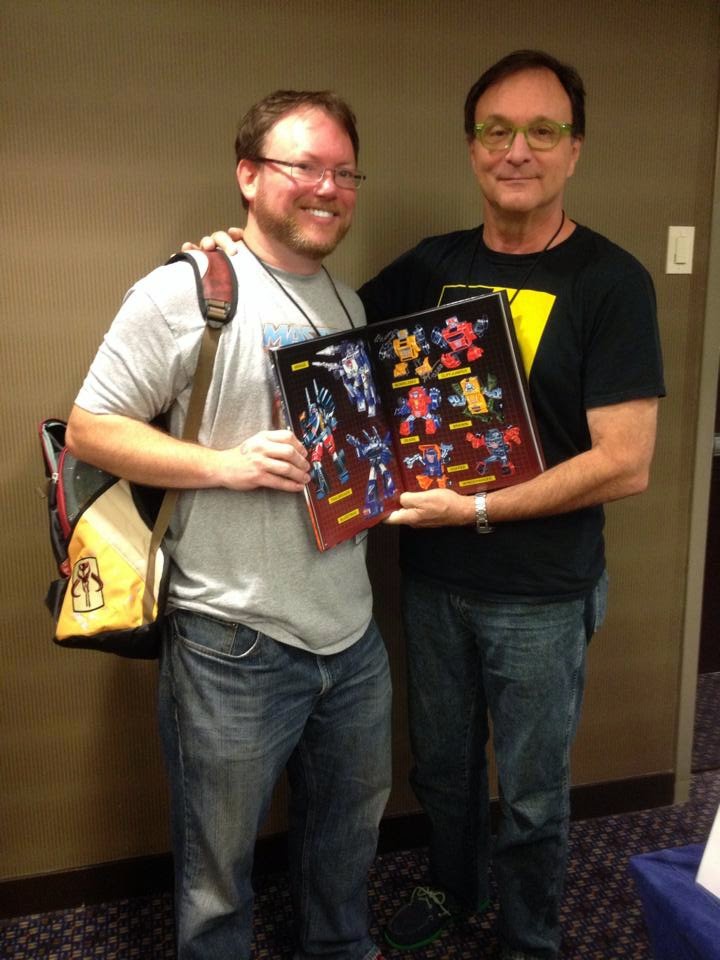 Some folks are already using this book to pick up autographs. I think that's a great idea!


Needless Essentials did a great review too: http://needlessessentialsonline.com/transformers-legacy-art-book-review/
Highlight: "Transformers Legacy claims to be an art book that collects hundreds of airbrushed paintings from the first decade of the Transformers line. If it wasn’t coming from IDW, Jim Sorenson & Bill Forster, I believe I’d be a little skeptical as I’ve heard similar claims from other authors/companies and got burned before. But this book comes from the same guys who made the GI Joe Field Manuals so I preordered this behemoth way back in February……I’ll cut to the chase right now, it was totally worth it!"

Yet another video review, much more concise. I love the enthusiasm here:
https://www.youtube.com/watch?v=8BioNyOArx8

Paul Hitchens of The Spacebridge uploaded a shot of the book next to some of the original art from the book! Nifty.

Battlegrip.com wrote up a cool review: http://www.battlegrip.com/?p=63536
Highlight: "This is likely to be the best Transformers artbook I ever find."

Auto Assembly's Billy Edwards posted this on their official site: http://autoassembly.tumblr.com/post/100768008850/longtime-auto-assembly-friends-jim-sorenson-and
Highlight: "Easily one of my favourite purchases of the last 5 years."

Geekcastradio did a (text) review as well:
http://www.geekcastradio.com/misc/books/review-transformers-legacy-art-transformers-packaging
Highlight: "I have as of this moment become a kid again. "

I'm sure there are more that I've missed, but basically I'm over the moon at the reception this book is getting. Sorry to be away so long, but I've got a one-year-old at home and I'm the primary caregiver so that's going to be the reality for the foreseeable future.

If you don't have Legacy yet, pick yourself up a copy.