Transformers Legacy up for pre-order and The Art of Prime on sale now! 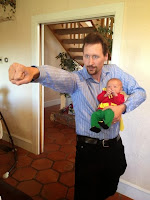 Hey, y'all! I know, I know, it's been far too long since I've blogged at you. With the birth of my son, James Magnus Sorenson, I've been incredibly busy playing superdad. Still, there's no shortage of Transformers related happenings in my life, so I figured I'd hop on here and whip out the old plug-o-matic. 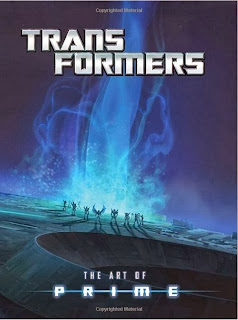 First up, The Art of Prime is on sale now. This is a 208 page hardcover that explores the designs and design process of Prime. It's the emphasis on process that really helps the book stand out. Not only is the book incredibly pretty, thanks to the surfeit of stunning material that was created in the production of the show, but it's informative. In the character portion of the book, well over half of the volume, virtually every character has the thoughts of the designer. They walk through their thought process, what they were going for, what their influences were, what their challenges were.

The volume is also punctuated with extensive interviews with each of the art department heads. I had a blast talking to them and I think you'll find reading about how a CG cartoon is put together both interesting and informative.

You can find a nice review of the book on tformers.com,and an interview with me about the book over on seibertron.com. 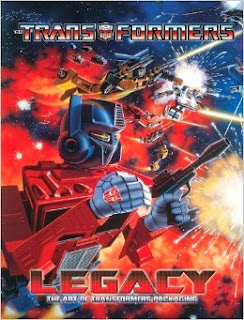 Next up is a project that I'm particularly passionate about, Legacy: A Celebration of Transformers Package Art. Though Bill Forster and I announced it over a year ago, at BotCon 2012, we finally have a release target: spring of 2014. Amazon is taking pre-orders, and I'd jump on that bandwagon now. This is a 300 page oversized hardcover that will look amazing on anyone's coffee table.

The scope of the book is G1 and G2, US and Japan. Within those constraints, we've managed to track down originals or first generation photo-negatives of about 95% of the artwork. If that sounds impressive, it's because it is. Hasbro and Takara (via Part One) opened their archives, but even that only got us to about the 60% mark. Thanks to the generosity of fans, we've managed to gather up nearly everything. There are a few gaps here and there, but overall it's a staggering amount of artwork.

But that's not all! We realize that this artwork is already available online, albeit at a lower level of quality, and wanted to pack the book with extras. We managed to speak to a good eight of the original artists and get their insight into what it was like to make these pieces. We found quite a bit of unreleased artwork, art for toys that never came out. We found a bit of art in the same style used for other purposes, like catalogs and puzzles, and feature that as well. Finally, we include some art in the same style that was used for pre-Transformers toys (Microman, Diaclone and more) and some of the modern art in the same style as used by Fun Publications and eHobby.

Many fans have been eager to help make this project a success. While the end is in sight, Bill and I have a few more weeks to finalize things. Here's a list of everything we're missing. If you have the original art for this, or a transparency or first generation photo negative, drop us a line:

US Astrotrain (Train Mode)
US Trypticon
US Piranacon

Europe:
Virtually all, but especially at least one of the battle murals from the back.  Pyro and Clench are personal favorites. I find the Rescue Force and the new Scrapper art pretty cool too.

Catalog and Puzzle:
There was a bit of catalog and puzzle artwork created in the same style around this time frame, I'd like to feature some in the book.

Diaclone / Microman:
Diaclone and Microman artwork is also of interest.  Omnibots, Bumper (that is to say, MC-04 Mini CAR Robo 02 Familia 1500XG), Kronoformers, Powerdashers would be high on the list of priorities. I'm also partial to Powered Convoy, and the blue Blaster Microman artwork.

Other:
I'd like to get my hands on the micromaster combiner back-of-the-box artwork that's in a kind of cartoony style, especially from the Combiner boxes.  Oddities, like the Tyco sets, are also of interest.  Any unused package art, guys that never actually came out or alternate variants for guys who did, are of keen interst.

Upgrades:
There are also some that I have decent quality pics of but I'd like to upgrade, mostly from 87:

If you have any of this material and want to help, please drop me a line.

The level of enthusiasm has been fantastic. I've had a number of people come forward with offers to help, including a friend who has some (sadly low resolution) Action Master transparencies and a fan who has pledged some UK G2 material that will be very cool. Keep it coming and spread the word. If you have a good lead on anyone with originals or transparencies, let me know. Ebay sellers you've dealt with, local comic shops or galleries, whatever. This is the time to make it happen.
Posted by Jimtron at 11:05 AM 8 comments: