Review: War of the Worlds, the series ep 13 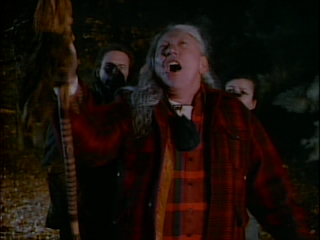 The thirteenth episode of War of the Worlds, the series is titled Dust to Dust. It seems that aliens have visited the American Indians in times of long ago. When the news covers a graverobber who discovers an old headdress with an unearthly crystal as a part of it, the aliens and the Blackwood team simultaneously move to retrieve it. There is a third factor, the Indian shaman Joseph Lonetree also seeks the return of the artifact.

Ironhorse's heritage comes to the forefront of the story as he is confronted with the path not taken. He bails Lonetree, who had threatened the graverobber with imminent death if the artifact isn't returned, out of jail and takes him back to the reservation. There he meets Lonetree's charming daughter, Grace, and they share some fast chemistry. The aliens, disguised as Bureau of Indian Affairs agents, kill the graverobber and use the artifact to track down an ancient warship. Harrison and Suzanne twig to alien involvement and move to warn Ironhorse, and all watch as the alien machine arises.  Joseph calls on ancient spirits, and three lighting strikes destroy the ship. Lonetree's staff also seems to be sporting an alien crystal, which he gives to Blackwood ... or does he? He shows his son another identical crystal and says that he gave Blackwood "what he thought he wanted." 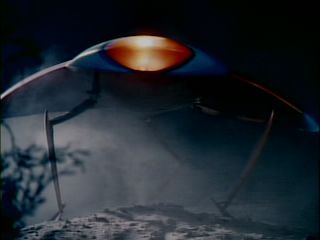 The Good: It's great to see an alien war machine again.  This is an older model, we're told, and rather than rise on magnetic legs there are physical legs.  I wish we saw more stuff like this. The tripod configuration is a nice nod to the source material.

We get some nice character moments for Ironhorse.  Chaves has good chemistry with Robin Sewell,  who plays Grace. He also nicely balances his reverence for Ivan Naranjo's Joseph Lonetree with his frustration at the mystical mumbo-jumbo that is so far outside of his experience. Blackwood gets some fun moments too, especially passing off the driving to Suzanne not once by twice.

The Advocacy, in some meta-commentary, realize that the television has given them vital intel but bemoan having to watch it.  It softens the brain, you see.

Once again, we get solid pacing, good acting, and especially no coincidence. It's the same broadcast that drew the aliens and the Blackwood team to the artifact. Most of the main flaws of the series are mercifully absent. 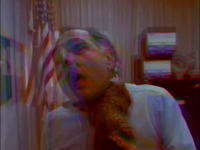 The Bad: Cheaping out. The aliens taking over the bodies of BIA folks started with some alien POV shots. We then get a very brief shot of an alien hand coming out of an unseen human's chest ... and it's a shot we've seen before, back in A Multitude of Idols. Clearly they just didn't want to pay for three more extras, which I don't really mind, but reusing shots seems like a poor move.

There is little too much mysticism for my taste. There is an out, for the writers, by implying that perhaps Lonetree's powers resulted from his maybe alien crystal staff.  But this is a solidly sci-fi show, so the magical elements feel thematically out of place. I suppose it's possible that the lightning strike was coincidence. The alien machine was certainly the tallest metal structure around. 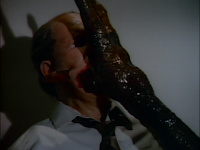 The Ugly: Murdered Graverobber.  True, he had it coming, and true, he was warned, but he got his face ripped open and his skull crushed in a nicely grisly end.

Overall, a solid episode. The episode whizzes by, which helps disguise the slight plot weakness. (For instance, Lonetree threatens the graverobber ... who then is murdered 8 hours later. Why are police not crawling all over the reservation? )  There's nice fan-service in the form of a tripod walker, and a satisfying exploration of what it means for Ironhorse to be an Indian living in a white man's world. And don't worry, as per usual, General Wilson gets a nod; "have Norton tell General Wilson to alert the Air Force."    War of the Worlds - The Complete First Season

remains easily available on DVD from Amazon.com and other fine sellers.
Posted by Jimtron at 4:36 PM

I agree with your criticism of the recycling of the footage. It seems to be a thing that happens a lot in season one (mainly in terms of the Advocacy scenes) which was a result of Sam Strangis' decisions as executive producer. It's frustrating as a viewer, but coming off the WGA strike with a limited budget- I guess I could see Sam's viewpoint.

I still don't agree with it however.

However, the alien war machine was nicely done. I did enjoy the creepy moment with the aliens walking right by Suzanne and Harrison- who are en route to the already murdered grave robber.

Oh, the lawyer for the grave robber btw was War of the Worlds director, George Bloomfield.

Alright, now that Pegasus models has come out with a model of the original war machine, it's time for a model of this one as well!