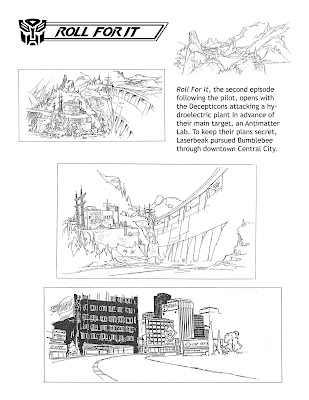 It's time for another edition of The Ark Addendum.  This time, I bring the first part of Roll For It, the second episode of the first season of Transformers.  (Fifth if you count the pilot in the numbering proper.)  I posted the second sheet from Roll For It almost a year ago.  At some point I'm sure I'll get around to parts three and four, but who knows what order I'll post them in!  MWAH HAHAHA!  I'M A MADMAN!!!

The episode is surprisingly rich in backgrounds, which is why I had to spread it out over four parts.  These are the models from the beginning, when Starscream leads the Decepticons in an attack on a hydroelectric plant.

In my opinion, the most interesting bit is the signs in the cityscape.  One can see why the poor overseas animators came up with some funky signs ... the models just kind of sketch things out.  Given this model, is Prim Cola really a huge surprise?

Also, the model identifies this as Central City.  Central City would also feature in the two part episode, Megatron's Master Plan.  A similarly named Center City would show up in a Find Your Fate Junior book.  I wonder where the name came from?  I haven't seen it in any of the series bibles, so it could be coincidence, or there might be other notes that I'm not privy to.  It's an interesting bit of trivia, if nothing else.

Stick around, Bish and Bill both have promised me some interesting posts in the not-too-distant future!
Posted by Jimtron at 10:31 AM

Email ThisBlogThis!Share to TwitterShare to FacebookShare to Pinterest
Labels: ark addendum, roll for it