Review: War of the Worlds, the series ep 11 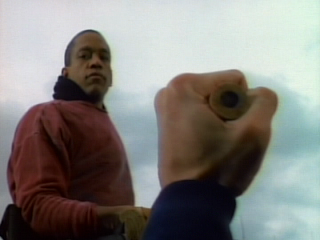 The eleventh episode of War of the Worlds is titled Among the Philistines.  It opens with the scene of some horrific traffic accident at night, with police and fire fighters everywhere.  Traffic has been narrowed down to a single lane.  A truck with three occupants in the cab is the focus of the camera and, as it turns out, the emergency workers.  Our heroes have been tipped to an alien operation and has set up an ambush.  Soon the truckers are beset by soldiers at all sides and pulled from the cab.  Blackwood wants them alive, but they commit suicide rather than face capture.  When the Advocacy finds out that all three soldiers perished, they are oddly glad that something is finally going their way.

It turns out that a linguist has been able to decipher parts of the alien language and has shared some info with the intelligence community.  Soon team Blackwood is interviewing Dr. Adrian Bouchard.  Since he has top secret clearance from his work with the Navy, they bring him in to their project.  There are a few hiccups, such as Debi's new dog which takes an instant dislike to the new member, but for the most part he fits right in.  A new transmission leads most of the team to take off, leaving Norton alone with Debi and the staff of the Cottage.  But Adrian is not what he appears - the aliens have infiltrated their main opponents!  When the dead body of the dog shows up, Norton puts all the pieces, such as Adrian's algorithm not working on older transmissions, together.  He comes up with a pretty decent plan to cut the phone lines and lock the intruder in the basement.  Unfortunately, Debi is with him.  Norton tries to get Debi out inconspicuously, but the alien realizes what's up and Norton is forced to confront him hand-to-hand.  Mr. Kensington, the groundskeeper last seen in the second episode, tries to help and gets strangled for his trouble.  Norton manages to defeat the alien with a staff, and the team mourns the loss of their friendly old groundskeeper. 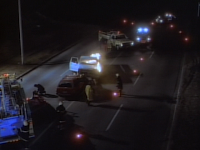 The Good: This episode is very well paced.  The opening is bigger than it usually manages, with a nice action sequence and lots of extras.  We then move to a more character based script that climaxes satisfactorily at the end.

It's nice to see Norton given something to do.  He's the real star of the episode, though that isn't immediately apparent.  All too often he's stuck at base; this episode, that plot point becomes critical and used well.

As usual, Ironhorse manages to get in some good lines, this time when consoling Blackwood about the war.  He relates a story from Vietnam to get Harrison out of a funk. 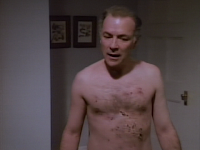 The episode is structured well.  Norton's bo-staff prowess is set up early, during a fight with Ironhorse.  (Norton wins by cheating - his staff has an iron core.)  Adrian's oddity is there, but it's subtle.  We the audience think he's an alien, but we don't know it for sure until he takes off his shirt and reveals a bunch of radiation scars.  There's no coincidence at all, either.  The whole thing is a plot by the aliens.

While Dr. McCullough typically has little to do, this episode has a tiny exception.  When the team figures out (via tuning fork ... yay!) that Adrian is an alien and goes to rush back, her first thought is of her daughter.  That felt very right.

Finally, Cedric Smith's Adrian was charming, intelligent ... and just a bit off.  Pretty much perfect. 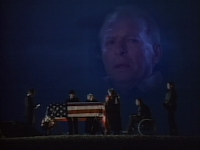 The Bad: Tom Kensington's death was a real non-event.  He was barely even in the episode, let alone the series.  To make things worse, the promo for the episode spoke about how a member of the Blackwood team was going to die.  Ummmm ... not really, no.  The funeral for him had some scenes of him from the series superimposed, and was REALLY over-the-top.

Adrian's ability to infiltrate the team seemed a bit much.  The man was downright charming for long stretches of time, which strains credulity.  Also, given the security around the project, shouldn't they at least have given the man a physical or ran a geiger counter over him?

After the compound goes into lockdown, the rest of the team return and can't get in.  Ironhorse breaks in ... which should be really cool.  But he does it by climbing a tree outside the compound perimeter that is already fitted with pitons and climbing gear.  Guh? Then, once inside the high wall topped with barbed-wire, he runs around through the woods. There are a couple of cameras, but there's no real sense that he's in danger.  Are there mines? Soldiers? Autoguns?  What exactly is making him nervous?  An altogether unclear scene.

Finally, I've decided to list the constant 'General Wilson' references as among the bad.  Normally I like continuity, but for some reason the fact that every episode has a scene or two where they mention that they need Wilson's permission (for Adrian to join the team) or that they got intelligence from General Wilson (about the alien truckers) is starting to get to me.  I think it's because we've seen him a couple of times and THEN he became this disembodied presence.  If he had just one more mid or late series cameo I think I'd remove this 'bad', but he'll never show up again in the flesh.  As it is, I debated it before finally putting it in. 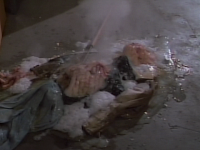 The Ugly: Aliens punching out their own hearts was a close contender, but Norton ran Adrian through with an iron bo-staff connected to a fuse box. Honorable mention to the dead dog hanging in a closet, but it was too tastefully done to be a proper 'ugly.'

It's a pretty solid episode.  Our heroes had to be just a bit dumber than they should to make it work, but it was a satisfying tale. I'm not particularly fond of the Norton character, so I'm surprised to find that the episode devoted to him would be one of the better ones. The plot even had a bit of weakness, what with the ease of infiltration, so I'm forced to conclude that my enjoyment comes from the overall execution of the episode.

A few notes from the neither good, bad nor ugly side.  This episode establishes that they've been fighting the aliens for 'a year.'  Good to know.  We  also get the odd revelation, from Harrison to Adrian, that the aliens are from Mor-Tax.  They've previously only been called Martians.  How does he know this?  I dunno.  Maybe he read the show bible.  It certainly didn't come about in-universe ... or did it?  There's an upcoming episode that may shed some light on it.  Perhaps the airing order is obfuscating things. War of the Worlds - The Complete First Season

is available for purchase on DVD.

Last month, on December 9th, Gene Barry passed from this world at the ripe old age of 90.  He was, of course, Doctor Clayton Forrester in the 1953 George Pal film that this series is based on.
Posted by Jimtron at 10:17 PM

Great review- to answer the question about why Harrison knows the alien home planet is Mor'Tax- this episode was supposed to air after "The Prodigal Son". The airing of first season episodes were all out of whack.

Ah, thanks for clarifying. I was going to speculate on that when we got to Prodigal Son, but it's nice to have confirmation.

Gentle readers, To Life Immortal is the preeminent fansite for the first season of War of the Worlds, and he's also spent some time corresponding with the producers. It's quite a privilege to have him posting here. Welcome to Disciples!