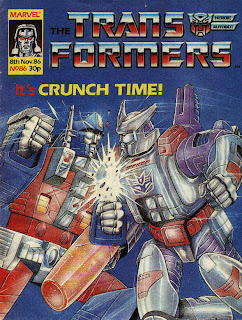 The cover was by Will Simpson and is a mixed bag. Individually the depictions of Galvatron and Ultra Magnus are very good. Galvatron in particular is a nice rendering of the partway between cartoon and toy form that the comics tend to use and Simpson manages to make it look very natural. Unfortunately the two figures don't appear to be interracting quite as forcefully as you might think and the lack of a background really hurts the impact as a whole. Not a bad effort: it certainly shows that Will Simpson can draw Transformers if he puts his mind to it and doesn't have someone scribbling all over his lines, but it could have been so much more. 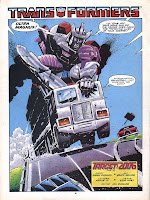 After a brief depiction of the destruction that Galvatron has wrought that serves more as an atmospheric lead-in than an actually useful recap we begin the issue in media res, which was, really, the only way for Furman to play it. We could have had Magnus and Galvatron trash-talking each other for a bit and starting their inevitable fight but what would be the point? It was always going to happen so instead show Galvatron clinging onto a speeding Ultra Magnus as he hurtles down a busy highway and what's more, make it a splash page. High visual impact - this is how comic book writing is supposed to work.

Magnus continue his mad drive only stopping when he reaches the end of a half-built overpass. Breaking at the last minute he is able to fling Galvatron off his roof and slam him heavily into the concrete below.

While despondently waiting for Galvatron's inevitable recovery Magnus does actually now recall the beginning of the fight. Magnus is trying to return Galvatron to his own time in order to get Optimus Prime back and gave him the chance to leave willingly. Galvatron, predictably, declined, and unfortunately he did it with a piece of dialogue that is a bit more leaden than Furman usually manages:

"What worries me, Ultra Magnus, is not what you say but that you actually believe in what you say". The two instances of "what you say" there are very unnatural sounding and should have been caught by Rimmer, if not by Furman himself.

Anyway, high-level nitpicking aside, the issue continues along at an exhilerating pace. At Galvatron's base the pair had started brawling with Magnus constantly trying to distract the Decepticon by causing bits of his giant anti-Unicron cannon to be damaged. While barely managing to hold his own Magnus receives a radio message from Kup, Blurr and Hot Rod telling him that they've found a way to get rid of Galvatron if he can just keep the Decepticon busy for an hour or two. 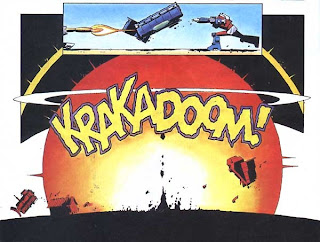 Cut back to the present and Galvatron is not even down for as long as Magnus hoped. He blasts the overpass and brings the Autobot crashing to the ground. They battle for a bit, with Galvatron clearly in better shape. The Decepticon aims his particle cannon at Magnus and the Autobot goes for one last desperate gamble.

Using his titanic strength Ultra Magnus is able to hurl an entirely full petrol tanker into the path of the beam: detonating in an enormous (and beautiful - thanks Geoff) explosion.

The issue ends on a terrifying image as the flames clear just enough for us to see Galvatron shaking his fist in triumph over the prostrate and defeated form of Ultra Magnus. This is probably Senior's best work of the issue with Galvatron posed dramtically, so we, the onlooker, have to look up to him. The fire from the burning fuel makes a background of pure hell on Earth with the devilish future Decepticon looking right at home.

What a cliffhanger! And what an issue! It's brilliant but perversely there's not a huge amount to say about this one. It's pure fight, fight, chase, fight but it does give us a nice look at Ultra Magnus' highly resolute character. He will not give up, despite Galvatron thrashing the life out of him. Sometimes a story like that can be all you need to sustain eleven excellent pages. Conversely, we do not get much insight into Galvatron. He has pretty much put all his cards on the table by now. We know that he is capable of immense savagery despite his fairly rational exterior and it is that aspect that comes to the fore here. It's a fun character to read about and a great counterpoint to Magnus' nobility, but not really deserving of much analysis at this point. 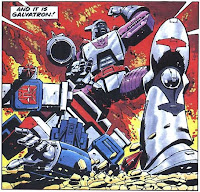 I have praised Senior's art a fair bit and it is richly deserving but I have to make special mention of Hart's colouring. I have been reading a fair few of the US issues recently and it has to be said that this is one area where they simply do not compare. Hart and the other UK colourists give the book a mature, textured style, with almost no block colouring, whereas the US books could have whole battles taking place between a red team and a blue team.

An excellent issue with a fantastic cliffhanger. If I had to wait for a week to know what happened next I'm not sure what I would have done, especially if I had been a child at the time!  IDW's trade of  Transformers: Target: 2006

is available from Amazon.com.
Posted by Bishbot at 4:58 PM

Nice review. It's great that somebody took the time to write it.

Sadly that issue was just the start of the many 'beat downs', that poor Ultra Magnus, would get from Galvatron.

Of all the Magnus-Galvatron battles, this one has to be my favourite. From a great creative team (glad you mentioned the colouring – the quality of which I’m only starting to appreciate from these reviews), there’s not a page here that I don’t love. Even the introduction was incredible: panel after panel of lifeless transformers, showing Galvatron’s apparent-invincibility, and the atmospheric text doing its job very economically (“…dealt with the opposition.”)

I remember when I first read this, I had to pick my jaw off the floor. As a child raised on standard good-beats-evil story arcs (and not quite grasping the tone of Target: 2006), I was totally expecting Magnus, after a suitably heroic effort, to win out. The fact that Galvatron never looked more frightening in the final panel (and that his cannon is pointing at the reader!) just adds to the final shock.

For me, this was the high-water mark of the storyline, even though there were still two more issues to go.