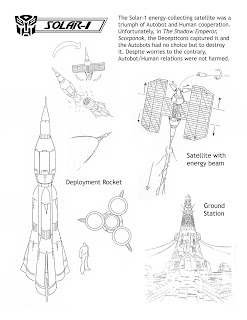 Welcome to another edition of The Ark Addendum. This fine January week, I bring you ... the Solar-1 satellite, from Headmasters episode The Shadow Emperor, Scorponok.

What is the Solar-1, you ask? Why, only the finest example of Autobot/Human friendship one could imagine. Sharing technology and labor, the two sides constructed this magnificent symbol, able to generate untold gigawats of power and beam it back down to a receiving station on Earth.

But what's this? The evil new Decepticon leader, Scorponok, hatches an elaborate plan and successfully snares it for his own nefarious purposes.  Chromedome has no choice but to destroy the satellite, rather than allow it to continue to power up the mysterious Decepticon installation on the planet Zarak. He worries about what his failure to recover the satellite will mean for human / Autobot relations, but Spike reassures him that Earth understands.

It's actually a rather nice design.  I like how much thought was put into every stage of the design.  The rocket looks very rocket-y, while still having a deployable satellite tip. The satellite itself unfolds a bit and sports a rotating tip.  Even the ground station gets a pretty cool, futuristic design.  For a one-time-only prop, it certainly got plenty of love.  Incidentally, I've posted other models from The Shadow Emperor, Scorponok as an earlier Ark Addendum. Check it out!
Posted by Jimtron at 12:02 AM