Review: War of the worlds, the series ep 12 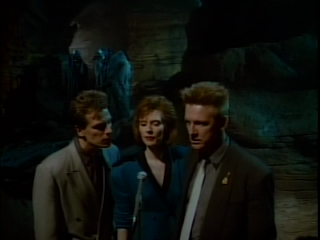 The twelfth episode of War of the Worlds is called Choirs of Angels. It opens on a bizarre scene at the alien's lair, with a grotesque parody of a recording session.  "We are the travellers. We are your friends. Believe in us.  We need your help. We are the future. Believe in us. We can save your world. Belive in us. Believe in us."  It turns out that they are attempting to co-opt one of Earth's best minds to their cause with subliminal messages.  The vector for this attack is recording artist Billy Carlos, portrayed by the show's real-life composer, Billy Thorpe.  He's only on the show for a few moments before the aliens dressed like producers kill him and embed their message in his music.

Dr. McCullough stumbles onto this plot in a not-quite-as-coincidental-as-it-sounds way.  She's trying to prevent live cell phase-matching and Doctor von Deer has promised her a weekend of his time.  Presumably she's trying to prevent alien body-snatching.  His own work is similar, which helps explain why both Blackwood and the aliens are after him.  You see, he was the target of the aliens subliminal message and has been knowingly working with them to develop a vaccine for them.  Unfortunately, he passes on a copy of his Billy Carlos tape to Harrison, a fellow fan.

Listening to the tape flips Harrison's world around in a big way.  He begins looking for reasons why we may have provoked an attack in the first place and settles on atomic testing and bombing of WWII.  Soon he's trying to convince the team to focus on communicating with the aliens, to prevent further misunderstandings.  Ironhorse and Drake laugh it off as a joke, but that stops when he jovially tries to cook a year of Norton's research.  Ironhorse figures out that it's the music messing with his mind and forces him into withdrawal.  McCullough does the same thing with von Deer, then figures out the alien's plans.  She taints their vaccine, but before she can leave they show up.  She bluffs her way through that encounter by pretending to be under the thrall of the music, allowing them to bring the tainted vaccine back with them.  The advocacy has the decaying producer trio test it on themselves, with predictably fatal results. 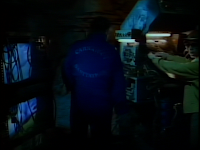 The Good: The directing! This episode was full of great moments, and the camera choices almost always emphasized this.  From the creepy opening recording session to the withdrawal process to the dying aliens at the end, the cuts and the angles were unexpected and worked well.

The recording sessions.  Not to beat a dead horse, but the aliens recording their message was wonderfully done.  The tempo started off slowly but built to a frenetic pace.  Later, at the mixing session, similar techniques were used.  I found it uncomfortable to watch, but in a good way. Makeshift alien tech, this time an arcade game, is also a hoot. 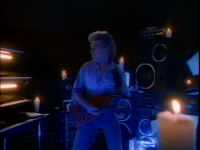 Billy Thorne was fun in his cameo.  Hey, it's his music, why shouldn't he get to show up?  It's a shame his avatar in the show had to die for his musical integrity, though. The musical piece with the subliminals was fun too, a jazzed-up version of the show's theme song.

Harrison's transition from alien hater to alien sympathizer was perfect.  First he's puzzled and starts to wonder why the aliens attacked.  That puzzlement morphs into understanding, which finally transforms into a sycophantic devotion to them.  Martin handles this superbly. 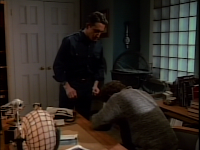 But even better is his withdrawal.  Blackwood begs, cajoles, threatens and otherwise tries everything he can think of to get Ironhorse to give him just one more taste of the music.  Chaves is strong opposite Martin, but it's Martin who really steals the show.  Ironhorse does have a great moment, though, when Blackwood emotionally collapses.  His instinct is to hug Harrison, but he for whatever reason doesn't do it.  It's a very nice, very subtle bit.

The episode is one of the few that gives all our main characters something to do.  With Harrison incapacitated and Ironhorse shepherding him through withdrawal, Drake became the de facto team leader. Drake also brings about a meltdown in Blackwood by confronting him with the reality of his parents' death by alien hands, a good character moment for both of them.  McCullough, of course, had her hands full trying to keep von Deer out of harms way while still sabotaging his research. 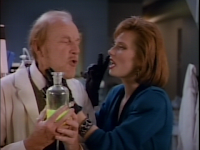 The alien producer trio are very nice as well. While they were good all around, their best scene was probably their interaction with von Deer.  Their contempt for him is barely concealed, and the delivery on lines like "yes, we will live as friends" is loaded with menace. The woman, especially, has a nicely macabre sexuality about her. She takes the point with von Deer.  I loved her attempting to teach him an alien phrase.  "Rof nosh ruth morgethai," won't you? 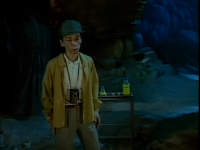 Finally, as the trio of aliens dies, horribly, and the advocacy walks away, a random alien just watches them die. He has no pity, no revulsion, and barely even a hint of curiosity.  He is, in short, alien.  Nicely played, WotW, nicely played.

The aliens just leave Dr. McCullough.  True, they debate killing her (bad for the team) or absorbing her (catastrophic for the team,) but ultimately ... do neither.  And we get no explanation either.  The same thing happened, more or less, in To Heal the Leper.  There, at least, the aliens were stopped by Harrison's barricade and perhaps scared off by the arrival of Ironhorse.  Here, there is nothing preventing McCullough's death.  She clearly represented a security risk, so why not kill her? 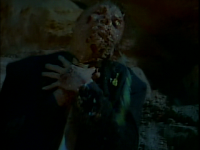 The Ugly: This episode was relatively gore-free ... right up until the last minute.  Then the three aliens died horribly. I managed to capture a still of one spitting up on himself.  Fun, isn't it?

Choirs of Angels is by far the strongest episode of War of the Worlds aired yet.  Even the title is a kind of twisted mirror, for if the Mor-Tax aliens are angels, they've fallen far indeed.  Unfortunately, it represents something of an apex, as the various disparate elements that occasionally make this show great never again align quite so well.  War of the Worlds - The Complete First Season

is available on DVD, and this episode is a strong argument for paying the $23 or so to get it.
Posted by Jimtron at 12:05 AM

Ahhhh, my favorite episode reviewed. It definitely is a very memorable episode. Here are some tidbits about the episode:

- There was going to be a gag with the dead limo driver in the car. When you see him late in the episode, he was already dead. Originally, he was going to somehow still be alive in the trunk when the aliens get their guns. The aliens would notice this, dispassionately kill the guy who refuses to die, and go back to work swiftly.

Dark humor on this show. :)

- Even though it's credited to Durnford King, Herbert Wright is the one who did the teleplay (along with his debut in directing).

- The whole scene with Dr. Von Deer learning "alien" was a bit of a thing Herbert Wright/Tom Lazarus/Greg Strangis were doing in speaking alien randomly in front of Paramount suits who were completely lost at what was happening. And also, it was Herb's notion of the futility of humans trying to decipher the language of dolphins.

Yes, Heidi Von Palleske brought a sexy menace to her as the alien soldier. Along with Ilse Von Glatz, she was one of my WOTW crushes. :)

I enjoyed what a motley crew this trio of aliens were. I loved how human games and makeup fascinated them so much while they waited impatiently in that limo. And they did a good job of maintaining their host bodies for 2 months.

Wow, thanks for the behind-the-scenes info.

I thought the limo thing seemed odd. Not odd enough to count as a Bad, but the director definitely played up the 'otherness' of the limo. The running gag would have explained that.

No pressure or anything, but feel free to go back to previous episodes and share your insight. This information is terrific.

No problem. I'll go back and see what behind the scenes info I can give you about certain episodes.

I did find the scripts of "The Resurrection", "The Last Supper", "Vengeance is Mine" and "He Feedeth Among the Lilies".

"The Last Supper" is pretty much the same(the only thing added is extra scenes with the Advocacy).

"Vengeance is Mine" is so dramatically different- I could forward that to you. And "He Feedeth Among the Lilies" has a very different (and in my opinion, more satisfying ending) in the script version.

What a wonderful review of one of my favourite episodes! I'm doing a WoTW podcast series soon, would be great to include some of these discussions in my commentary! :)

Hey, have me on, I'm no stranger to podcasts.