Review: War of the Worlds, the series episode 14 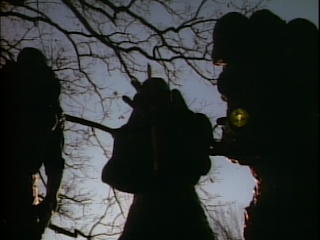 The fourteenth episode of War of the Worlds, the series is titled He Feedeth Among the Lilies.  In a nice twist, it is entirely motivated by the Blackwood team.  They've been interviewing people who've had encounters with aliens, gathering data to try to better understand their enemy. In the course of their investigation, they meet several people who have been abducted and probed by aliens.  One in particular stands out, the beautiful and inquisitive amnesiac Karen McKinney.  She and Blackwood share instant chemistry, which makes him work all the harder to unlock her missing memories. They become lovers. When it turns out that she had indeed been the subject of aliens medical experiments, the team decides to try to find out what specifically was done to her.  Unfortunately, the aliens harvest her, leaving Harrison with only the bitter certainty (but no proof) that she was taken.

The Good: This is an unusual episode, and it works well.  Generally it's some alien plot that sets things in motion, but this time the team has decided to investigate in a specific way and it uncovers a plot that might otherwise have gone unnoticed.  Kudos for breaking format. 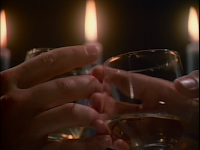 Karen and Harrison work well together.  Their relationship, brief though it is, feels real and believable.  The directing really helps too, with tender moments between them when they dine and when they make love.  In a way, they're both damaged goods, having suffered at alien hands, and I think that subtext is present in both their performances.

The abductions are downright terrifying.  When we saw Karen's abduction and the implantation of a monitoring device inside her, the perspective shots really emphasized the violation.  This was made explicit in dialogue during word association; when McCullough says 'alien', Karen replies 'rape' without even knowing why.

Though this one is another Harrison-centric episode, Norton and Ironhorse both get in a few good moments.   Norton is at his best when slyly mocking Ironhorse for offering to conduct the interviews himself while Harrison is AWOL with Karen.  Ironhorse's best scene was when his frustration with interviewing abductee after abductee boiled over.  Harrison asked him for a better plan and he came up with one - interviewing veterans and government officials from the first invasion.  A good character moment AND a good nod to the original film. 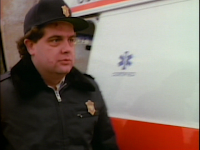 The aliens abduct the bodies of two paramedics and commandeer an ambulance for mobile experimentation.  The show was always looking for new kinds of people to make aliens, and the paramedics make perfect sense. I love the use of ambulance imagery juxtaposed with horror.

The very first scene of the episode was also a nice bit of misdirection.  An ambulance arrives and doctors and staff rush a patient in a gurney down the hall to an ER.  It feels very much like a standard medical drama ... until they get to the OR and find that it's been looted, with overturned tables everywhere and most of the gear missing.  It was an unexpected way to take the scene, which then effortlessly segues into the alien cavern, where a trio of alien nurses do some surgery on still living patient.  It's the spoilage of the living humans in all the radiation that first prompts the aliens to go out into the field for their experiments. 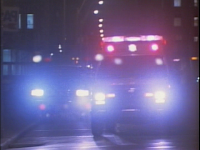 Finally, right at the end, Karen has a premonition of something bad happening and calls Harrison for help.  He rushes to her, but on his way pulls to the side of the road to let an ambulance pass ... an ambulance full of the very beings coming to take her away.  It's painful to watch him pull to the side and surrender his lead to his adversaries.  This scene was even foreshadowed, when the paramedics called humans fools for pulling out of their way.

The Bad: The ending was incredibly abrupt.  The aliens take the silent but pleading-with-her-eyes (great work by Cynthia Belliveau, by the way) away in their ambulance, Harrison arrives seconds later and rushes into the hotel.  The screen freezes, there's a brief voiceover about how he knows it was Aliens that got her, and the credits roll.  It really feels like about 5 minutes of denouement was missing. 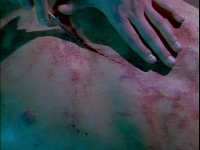 The Ugly: For one of the more genuinely scary episodes, not too much gore.  However, the sight of the alien nurses cutting into a living victim was pretty ugly.

So, another winner of an episode.  The ending wasn't even bad, it just didn't feel like it finished.  The idea that Harrison meets this great love and then she's snatched away is pretty awful, but we never get to see his reaction to it.  This is simultaneously the most gently sensuous episode and also the most disturbingly violating episode, and it's no accident that these ideas go together.  He Feedeth Among the Lilies uses sexual imagery, both consensual and nonconsensual, to enhance it's emotional impact.  It's a fine line to walk but it manages to do it well.

The show has well and truly hit its stride by this point, with five strong offerings in a row and a real winner to come next week.   War of the Worlds - The Complete First Season

is available for sale on DVD.
Posted by Jimtron at 11:23 PM

Here's the original ending of "He Feedeth Among the Lilies":

HARRISON
I figure, Karen's been traumatized...
first by the Aliens, and secondly, by the
knowledge there are Aliens walking this
planet. She's been shaken to her core.
Lost all sense of trust and safety.

Suzanne nods. She's with him all the way.

HARRISON
(continuing)
I thought first I should help create
an environment of security and safety.
A nest. Then I had another idea. Show
her life. Show her all the great experiences
and places and wonders on this planet...Fill
her with the wonder... (turning back to
Suzanne) What do you think?

SUZANNE
(gently, a fact)
You're serious about her.

HARRISON
I figure I'll take a month off. I haven't
taken a vacation in something like ten
years. Then, I'll come back to our mission
renewed.

IRONHORSE
You're going on a trip? Am I missing
something?

HARRISON
This is the perfect time. Norton is still
evaluating the data from the interviews.
There's no pressing Alien offensive. I have
to take care of the other parts of my life.
In the long run, it's good for the mission.

HARRISON
And I'll be only be a phone call away.

HARRISON
(into phone)
Hello.
(beat)
Put her through.
(covering the mouthpiece)
Excuse me. It's Karen.
(then, into the phone, warm)
Hi.
(concerned)
What?
(after a beat)
Of course. Right away.

Harrison puts down the phone and hurries out.

Tight on Karen. She's been crying.

KAREN
I can't do it. I want to be with
you. I feel what you feel. I know that.
But, looking in your eyes...(turning away)
I feel so stupid.

pulling away from Harrison's.

melancholy. PULL BACK TO REVEAL he's sitting alone on the railing of the balcony off the living room. A fire crackles in background through the window. It's cold. Harrison is dealing with the pain. It's hard. There's sadness. Regret. A whole lot of feelings. We stay with him long enough to know what he's feeling, then Ironhorse moves out and joins him.

Harrison nods. They both look out in the night.

glancing over at Harrison to check how he's doing. After a real long beat...

nodding, then heading back inside. When he's inside, Ironhorse looks back to see if Harrison's all right.

at the back of Harrison, who's looking out into the night. We hold on him for a disarmingly long beat, then we....

A deserted street slick with the evil of night. TWO TEENAGE GIRLS walk along the sidewalk. We RACK FOCUS to an ambulance, its running lights reflecting gaudily, its green beam searching the sidewalks for "patients", cruises toward them.....

Thanks for posting that. It's certainly different from the ending we actually got. It's a much more human ending, more subtle and complex than the horror show we got. If the ending we had had a bit more time to decompress, it might have been more effective, but as it stands, I think I'd have rather the original ending.

I also like the snipped of dialogue cut from the Aliens, after they abduct the man from his car:


PARAMEDIC/ALIEN
(IN ALIENSPEAK, SUBTITLED)
I like the female Humans better.


I wonder what that was about?

I always got the impression that Tom Lazarus (the writer of this episode) always leaned towards the more sexual humor.

That being said, it makes me wonder about the aliens preferences when they inhabit a body.

Despite the abrupt ending, I really do enjoy this disturbing episode.

Speaking of the guy who gets sliced open at the beginning of the episode, does anyone know the actor who played that? He wasn't listed in the closing credits. A shame really since his performance truly set the tone for the episode. If anyone knows, I'd appreciate them answering. It's been 20 years and it still bugs me!