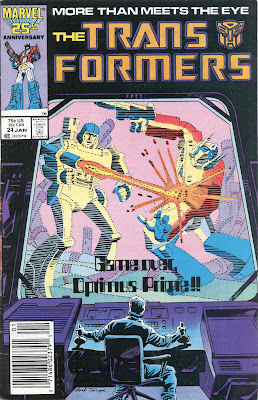 Afterdeath! is the twenty-fourth issue in the US G1 Marvel ongoing Transformers comic. It takes place after G.I. Joe and the Transformers #1. It was written, as usual, by Bob Budiansky. Don Perlin again provides the pencils, with inks by Akin and Garvey, colors by Yomtov and letters by Chiang. Herb Trimpe draws the cover.

The cover is somewhat intriguing. Megatron blasts Optimus in the chest, but on a computer screen. A human sits, with two joysticks in his hands, watching the two of them. "Game over, Optimus Prime!!" is written in a computery font.

Unfortunately, the cover is fairly literal, but we'll get to that. The issue opens on a full splash page of some sort of mechanical being getting slagged by some smaller robots. They seem to be villains, reveling in their destruction. The next page reveals that to have been the video game character Formulak the Compuzoid, under the control of the human Ethan Zachary. Ethan is misusing company property to play an incredibly sophisticated video game when he should be working on an experimental Hydrothermocline, able to generate enormous amounts of energy by exploiting the differences in temperature between different layers in the ocean. He's oblivious to both his colleague, an attractive woman, and to the attentions of one Combaticon, Vortex. Vortex learns about not just the Hydrothermocline, but also a cheat code for the game, but surely that won't be important.

Meanwhile, the Autobots have extracted the cerebro-shell from Prime's brain and are using it to listen in on the Decepticons. They find out about the imminent assault on the energy lab and move to intervene. Prime points out that their battle will surely wreck the object of Megatron's fancy, which prompts Ethan to suggest an alternative - a virtual reality battle. The Decepticons insist that the stakes be higher than just the Hydrothermocline ... the leader of the opposing side must also die. Thus, Prime and Megatron are wired with explosives, the controls of which are given to Ethan. And so they enter the Multi-World!

Optimus immediately reminds his Protectobots that they must treat the game as if it were reality, which seems very silly to me. Nevertheless, off they go, to make friends with the CG natives and hunt Megatron. And so they do, with three teams of Autobots facing three teams of Decepticons. In each case, by protecting the natives, the Autobots gain an advantage and win. Optimus and Defensor face off against Megatron alone, and Defensor sacrifices himself to take out Megatron. 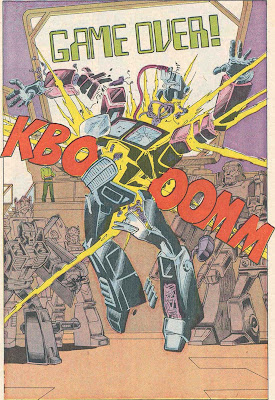 Only, it's not, because Megatron has learned of the cheat code, the word 'Afterdeath'. Inputting it gives him a second chance at Optimus, but Optimus wrecks a skyscraper full of vr dudes to kill Megatron a second time. Ethan prepares to blow up Megatron, but Optimus has other plans. Killing the natives was something he'd NEVER do in real life, so, really, Megatron won. Ethan protests, but Prime insists, and much to Megatron's delight Optimus is blown up.

The Decepticons silently depart with their macguffin, and the Protectobots leave with their destroyed leader. Ethan feels guilty, but at least he has the advantage of being able to play Optimus Prime in the Multi-World again ... he's saved him to floppy disk.

Well, this is one of the odder offerings from the Marvel run. It seems certain that Hasbro mandated that Prime be disposed of. However, while the cartoon did so in the spectacularly awesome fight-to-the-finish in The Transformers The Movie, the Marvel run of G1 has Prime die not with a bang but with a VR whimper. I suppose Budiansky was trying to make a point about Prime's rigid, uncompromising ethos, but instead he comes across as naive and perhaps even foolish. After all, nowhere in the rules did it say that they had to treat Multi-World as if it were real. Doing so gave his side some advantages, but it was ultimately still arbitrary. That Megatron cheated made the whole thing even more bitter. Maybe he was just shell-shocked and needed an out; he's always seemed a bit suicidal.

Aside from the whole 'Prime dying' thing, the issue is still pretty weak. The Multi-World quickly becomes repetitive as we see the same scenario play out three times in a row. Even in the Marvel Universe (or pseudo Marvel Universe), the tech here seems WAY too advanced for 1986. This isn't even getting into Prime's whole brain fitting on one floppy disk. The artwork is pretty typical Perlin - solid but not inspired. It doesn't help that this issue ALSO serves to introduce us to the Combaticons and Protectobots, so it's as much about us meeting them as it is about Prime dying.

Ultimately, it's a necessary read, but one that leaves a bad taste in my mouth.

Afterdeath! is available from IDW Publishing as part of  Classic Transformers Volume 2

from Amazon.com and other fine stores.
Posted by Jimtron at 4:39 PM

What bugs me even more about this issue besides Prime's ridiculous death is that the Protectobots and Combaticons just show up with no explained origin. The comic was usually really good at explaining where new characters came from; even a throwaway line referring to "reinforcements from Cybertron" would have been nice. (I am aware that their origins are expounded upon in the UK comic book.)

It's pretty obvious that the plan is to bring Prime back eventually, so his destruction really doesn't seem all that tragic. (Besides, the guy spent practically the first year of the comic book as a disembodied head, so it's not like he was a major player.)

"What bugs me even more about this issue besides Prime's ridiculous death is that the Protectobots and Combaticons just show up with no explained origin."

I assumed it was the same way as the Aerialbots and Stuncticons were created in #22.

Hmmm ... I've reviewed the issue and Ethan doesn't says anything like that in that panel. WAY earlier, when the game first starts, he tells both sides that there are potential allies and enemies among the world. Megatron demands Ethan tell him who the allies are, but Optimus points out that finding out is part of the game. Ethan hopes that Megatron doesn't find out until it's too late. This isn't particularly ominous - Megatron was threatening to kill him moments earlier, and was poised to steal his employer's energy generating device should the Decepticon prevail.

Certainly, if you choose to interpret the story as Ethan cheating, that's your prerogative, but there's no real evidence in the story to support that view.

I mean, really, if he was going to cheat, he'd just blow up Megatron as soon as the optics on the 'Cons had been shut off, then turn on the optics of the Autobots and let them mop up. I think the fact that he didn't is proof of his honorable intentions.

When I first read this I have to admit I was rooting for Ethan to try the "Oops! Pushed the wrong button" routine and blow up Megatron instead.

Although given Prime's adamantine ideas of fair play, he probably would have insisted that he got blown up afterwards - and the Protectobots too, just to make up for the accident.

(And now I'm envisioning the scene from Monty Python's Life of Brian, where all twelve transformers end up lying dead on the ground like the Judean People's Front - leaving only Ethan with a handful of joysticks and a bemused expression).

Having said that, it was a very lame death. I much preferred Megatron's departure in the next issue (sadly robbed of any permanence in the UK issues, because he popped right back up).

In hindsight, i agree with what you are saying, but at the time, i thought the whole virtual world thing was so cool, and admired how Prime took his punishment for killing innocents to get at Megatron.