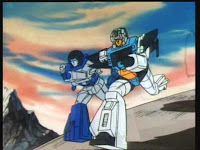 A welcome aspect to an episodic series is that when there is a sub-par episode or two, it is fairly easy to omit these from your repeated viewings and yet not miss any essential overarcing story elements. In the case of the original U.S. Transformers series, this means I can happily skip "City of Steel" and "The Autobot Run" and advance to long time favorites such as "War Dawn" or "The Golden Lagoon". However, in the case of the more serialized Japanese Headmasters, this means that by skipping a mediocre episode there might be some crucial bit of information missed that will play a part in subsequent episodes. "Rebellion on Planet Beast" is an example of this conundrum.

While on patrol in deep space, Fortress and his team of Headmasters encounter two refugees, called Beastformers, from the Planet Beast. They have fled to find help, as they reveal that some inhabitants of their planet have been enslaved by the Decepticons, while other inhabitants have actually joined up with the oppressors. Fortress agrees to help liberate them, contacts Rodimus on Athenia and is soon joined by him in the fight. Daniel and Wheelie have stowed away on the giant battleship, which is the transtector Maximus, and figure prominently and most annoyingly in this episode. The only item of consequence gained here is we learn the Decepticons built a factory on this planet and enslaved the Beastformers in order to construct one very large component. The suspicion is raised that similar factories exist elsewhere on other planets, each contributing components to a massive, as-yet unknown threat. The seeds of a long term plan are planted here.

This Planet Beast consists of walking, talking, fighting, armor-wearing reptiles, amphibians and mammals, adding to the absolute strangeness in an already odd episode. It is an isolated incident of product cross-over in Transformers, outside of the subtle G.I. Joe elements which popped up from time to time. Seeing as how the Beastformers was a separate toyline introduced in the late 80's (I am pretty sure I even owned a few), but one which never garnered its own series, I guess Takara decided to grant them "special guest star" status. The enslaved guest stars could have been any number of races, there is really nothing about the Beastformers involvement here that is integral and unique and much about them goes unexplained due to lack of time. The leader, Pirate Lion (yep, a Lion who wears an eye-patch) continues to consult some sort of oracle, Saber Sword, with whom he communicates through what looks like a picture frame. This Saber Sword fellow seems to have an answer for everything, but who knows why or how. Personally, I just can't get used to watching frogs, snakes and bears behaving as human, using weapons and whips, etc. I can't even stand seeing talking animals in live-action movies. Once I saw this episode, "Carnage in C-Minor" didn't seem to terrible anymore.

Once Galvatron is alerted to Fortress' presence on Planet Beast, he and his Headmasters meet up with Cyclonus and Scourge to attack the Autobots. Rodimus arrives with the Trainbots and the Monsterbots, the latter in their first appearance – Repugnus, Double Cross and Grotusque. The struggle to free the Beastformers is brief, completely underwhelming and embarrassingly played for laughs from start to finish, as Galvatron, Cyclonus and Scourge are portrayed almost as Cybertron's answer to The Three Stooges. We witness the Autobot Headmasters' penchant for swapping heads during battle, in order to increase one another's strength or intellgence, such as Brainstorm's head on Chromedome's body helping him out of a bind. Finally, in the end, Rodimus orders Repugnus and Grotusque to remain on Planet Beast as guardians, where they should fit in nicely and to my memory I don't think we ever see them again. Hey, nice cushy job for the Monsterbots!

This is the first in a cadre of episodes which do not involve Cybertron or Earth, instead taking a more "Star Trek" approach of "seeking out new life and new civilizations". This focus helps to add color and diversity to the series in the same manner as seen and argued about in Season Three of the U.S. series. I was always a fan of this approach, for better or worse, feeling that there were few limits in terms of storytelling in the Transformers universe and appreciative that the makers broadened the scope, even if attempts such as this fell far below the mark.

Next time out, "Approach of the Demon Meteorite" returns to some familiar ground and features the absolute worst temper tantrum from Daniel. You must be intrigued!
Posted by Brian at 2:14 PM

Really? I rather liked the beastformers. I enjoyed the crossover, and didn't have trouble suspending my disbelief. It's not even really a new idea to Transformers. After all, The Quintesson Journal featured the cat-people at war with the dogfolks.

True, that is good point, I forgot about that aspect of that Season 3 episode. I guess that episode's story was strong enough for it to not really bother me! The same thing could have helped "Planet Beast" succeed with me, if its overall story had been better, there had been less Daniel & Wheelie goofing around and the "Three Stooges" comedy stylings from Galvatron, Cyclonus and Scourge had been cut completely.

At least the Monsterbots got some screentime! :)

I enjoyed the crossover too. And at least the Monsterbots did appear in this series and not only in US commercials.

I always liked the Battle Beasts, so the idea that they could show up in a TF episode is kind of cool. Of course I haven't seen this episode so I can't say if it 'worked' or not.

As for Daniel & Wheelie... I always thought TF had some heavy themes for a kids show, particularly in the first season- thats actually why I liked it so much. I remember some fans feeling that Spike was winy & annoying, although I wasn't one of them. Anyway, my understanding is that the targeted viewing audience for TF in Japan was younger then abroad.

Although adding Daniel & Wheelie is not unlike putting Robin with Batman- it changes the whole dynamic. Can you imagine Christopher Nolan directing a Batman movie with Robin?

Caleb, you are correct as to why younger characters have been included in the TF series and I always understood why. The difference is that Spike was smart and well-rounded, skewing more towards a teen bracket, I could relate to him when I watched the show when I was a smart 11-year old, whereas Daniel in the Takara HM series often acts like an impatient 4-year old, which no one likes to watch! :)

While I know that the Rebirth didn't occur in the Japanese Headmasters universe.. I like to chalk Daniels sudden metamorphosis back into a spoiled child up to his Head Trauma in that 3 parter.. Simply because Its funnier that way I think..

Yeah I agree with you Brian. I don't like to be pandered to as if my intelligence level were below normal thresholds, LOL- & it does seem a tad strange that Daniel's maturity level diminished in 2 years.