Unlike a lot of the G1-themed Robot Heroes two-packs, which pair together unrelated characters, sometimes from different time periods, in a seemingly random fashion (SEE: Sunstreaker vs. Galvatron), the Beast Wars-themed sets have fared considerably better. The cast of Beast Wars was so small that nearly any pairing would potentially make sense, since just about any two characters are bound to have interacted together at some point. That said, the pairing of Rhinox with Waspinator seems particularly appropriate, given that—while other characters were either killed off or given Transmetal upgrades in the name of selling new toys—these are the only two characters in the show who survived all three seasons while still retaining their original bodies (despite the fact that Hasbro produced Transmetal toys for both of them). 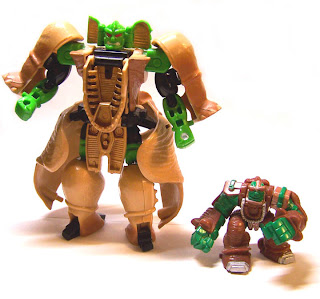 The animators at Mainframe did take some creative liberties when designing the look of the characters for computer-generated animation. Where the original Rhinox toy seemed to be designed with a Japanese samurai theme in mind—decorated in ornate armor panels and head gear, complete with a curved katana-like sword—the approach to his CGI incarnation was less elegant, placing more emphasis on his physical bulk. The animation design also omitted the large decorative panels on either side of Rhinox's head that closed together to form the toy's alternate mutant head, a gimmick that was ignored altogether in the cartoon. The open helmet halves have always looked like absurdly large ears, to me, so I'm more than happy that they changed his look. The Rhinox toy was part of the second wave of Beast Wars toys to hit stores in 1996, but despite being an important character on the show, the toy was a pegwarmer, due in part, I suspect, to the different appearance of the toy.

While the Robot Heroes version of Rhinox is mostly consistent with his appearance on TV, a number of details inspired by the original toy were also thrown into the mix. His head was clearly sculpted with the cartoon in mind (and the elephant ears are mercifully absent), but his squared-off shoulders, the circuitry detail on the lower rhinoceros jaw mounted on his chest, and the samurai cod piece are all taken from the Hasbro toy. Rhinox had a number of other design changes that set his CGI model apart, like the way his robot feet appeared to replace his center rhinoceros toenail, and the way the rhino hide completely enveloped his upper arms instead of hanging loosely to the sides. Portions of his front rhino legs were actually split in half on the Robot Heroes toy like separate armor panels attached to his upper and lower arms, which is found neither in the CGI model or the original toy. On the upside, he does have only three fingers per hand, which is fairly typical in the Robot Heroes line but generally not accurate—except in Rhinox's case. He's posed in a semi-crouching position, with his fists clenched tight like he's ready to pummel some hapless Predacon for giving Rattrap a hard time.

His colors are a little bit off, sadly. Rhinox was a muted greyish-brown in the TV series, so when the toy finally came out and was revealed to be a light tan, it looked wrong somehow. The Robot Heroes version corrects this by darkening his main color to almost a mud-colored brown, but they may have gone too far in the other direction because he seems too dark, somehow. The toy is bright green in places where his robot parts are visible, mainly the head and fists and arms, accented with a metallic gold color. While he's wearing the square-shaped shoulder armor from the original toy, it's colored gold as if it were the rounded shoulder pads from the CGI model, so it's an odd bit of juxtaposiiton. In place of the Maximal symbols on either side of his helmet, which admittedly would be nearly microscopic, there's a comparatively gigantic insignia on the top of the rhinoceros head (which also just happens to be on his butt). All in all, it's a decent representation of the character, though I feel they relied too heavily on the original toy for reference, when something more faithful to the animated character would have been more enjoyable. 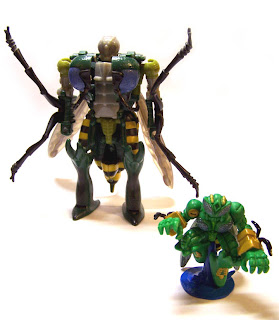 Waspinator began as a fairly unremarkable toy with an eminently silly name (he's referred to in his own tech specs as "The Waspinator"; Hasbro very clearly intended for him to be a Beast Wars version of The Terminator) but was almost instantly propelled to star status due to Scott McNeill's skillful voice performance and the insanely goofy antics in which he was frequently a part. Waspinator took so much abuse during the course of the show that fans began to liken him to Kenny from South Park, knowing full well that by next week's episode he'd end up getting smashed or blasted apart or pulverized somehow. It's ironic that the accident-prone Waspinator would go on to have the greatest longevity among his teammates; while characters like Terrorsaur and Scorponok were quietly written out of the show, and others went through multiple upgrades as Transmetals, Waspinator not only went on to last through all three seasons of the show in his original body, but—not unlike Sky-Byte of Robots in Disguise fame—he was the only of the bad guys to get his own happy ending, remaining on prehistoric Earth and worshipped by the primitive humans, in what can only be described as the ultimate example of art imitating life.

Like Rhinox, the Robot Heroes incarnation of Waspinator takes most of its cues from the CGI model with a little bit of the Hasbro toy thrown in for good measure. Mainframe took the basic details of the original head sculpt and exaggerated them for comic effect, and the Robot Heroes toy is true to that look, featuring enormous segmented bug-eyes, head-mounted antennae, and a segmented jaw that's opened completely the wrong way. If you look closely you can even see tiny little serrated teeth inside his mouth, which might seem like something they threw in there to be cute, but this is actually pretty accurate to Waspinator as he appeared on TV. They remembered other details specific to his CGI design, like the ribbed yellow plating on his legs and his pointy little three-fingered hands. He's sculpted in a fairly menacing pose, with arms poised like he's going to throttle one of the Maximals for stuffing him inside a trash compactor. Like a lot of aerial characters in this toy line, he's actually in mid-flight, suspended by a blue-colored column of indeterminate origin. It could be splashing water or thruster exhaust or some kind of energy propulsion field; whatever the case, it's coming right out of his butt. Make of that what you will.

Unfortuantely, Waspinator's animation model has a lot of color detail to it that may have been too cost-prohibitive to accurately reproduce at this scale and price point. He's got the yellow-and-black stripes on his abdomen, but he's missing them completely on his upper legs and antennae. Also, the circular panel on his left shoulder is painted, but the one on his right shoulder isn't; it's a glaring oversight and one I'm surprised they missed. Some additional color detail that's missing (like his yellow lips or the black rings around his eyes) would have gone a long way towards turning a merely good figure into an exceptional one. Also, the inclusion of design features from the Hasbro toy (like the obtrusive ball-and-socket connections on his wings or the panel on his back that originally allowed him to switch from his robot head to his mutant head) really mars an otherwise dynamic and impressive sculpt. I don't know why the sculptors felt the need to look to the Hasbro toys for inspiration when the Mainframe computer models were practically begging for three-dimensional toys in their likeness. (I shudder to think of what they'll end up doing to Dinobot, if they ever get around to doing a Robot Heroes version of him!)
Posted by Zobovor at 7:31 PM

Nice little review there. You totally sold that 2 pack to me.