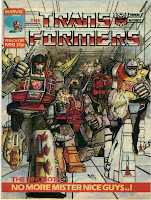 “The Wrath of Guardian!” was scripted by Simon Furman, pencilled and inked by Barry Kitson, coloured by Gina Hart, lettered by Annie Halfacree and edited by Ian Rimmer.

The cover for this story was by Will Simpson and depicts the four uninjured Dinobots (Swoop having been damaged by Guardian last issue) charging through one of the corridors of the Ark, brandishing energo-swords and firing their blasters. The caption tells us “The Dinobots: No more Mr Nice Guys!” and they certainly look suitably fierce, prepared to exact their revenge on Guardian. These are very much toy-inspired Dinobots, as are Kitson’s within the issue itself, and it is maybe lucky that the Dinobot toys were largely free of the weird proportions and blank faces that characterised many of the early Transformers toys. Its a good cover, action-packed, with a skilful rendering of the characters and, for once, isn’t marred by speech bubbles or adverts for free gifts. Oddly, the little picture of Prime’s truck mode in the box containing the date and issue number has now lost the cliff it was standing on and he appears to be flying through the air.

Following Guardian’s appearance with an unconscious Swoop at the end of “Decepticon Dam-Busters!” the Dinobots waste barely a page before charging into battle in Dinosaur mode. With Grimlock’s simple instruction: “Take him!” they mob the battle Droid, but Ratchet does not think they will be successful against an Omega Class Battle Droid (Omega Class is a nice shorthand for really, really mean). The Dinobots are fighting bravely, but doing little more than distracting Guardian. Ratchet hangs back to analyse its defences. Remembering that it has a vulnerable access port, he scrambles up Grimlock’s back and fires his laser scalpel into the port on the back of Guardian’s head. The Droid is stunned by the attack and goes reeling off, into the depths of The Ark. 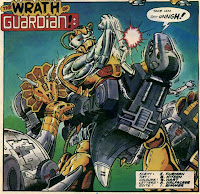 After the fighting, Ratchet is openly critical of the Dinobots’ performance against Guardian. Grimlock argues that Ratchet took his sweet time in intervening and tasks him with repairing Swoop. However, Ratchet says that Swoop has to wait his turn, because the list of Autobots damaged by Shockwave is extensive, and in any case “The need for extra rash stupidity is minimal, to say the least!” He tasks Grimlock with finding the droid and keeping him under his feet. The Dinobots are amused by Ratchet standing up to their leader like this but Grimlock chokes them off, appealing to their senses of pride and vengeance (although Slag still can’t help but comment on how “original” their leader is in his thinking).

We are reminded of the larger ongoing story when Ratchet bumps into Optimus Prime’s headless body. This triggers a cutaway to the Decepticon base where Shockwave explains that he reprogrammed Guardian and taunts Prime’s disembodied head with the knowledge that he is giving birth to a new generation of Decepticons. They are unnamed, but the six brain modules we see here are the Constructions, destined to come to fruition in “The Next Best Thing to Being There!” Prime is quietly confident however, knowing that Shockwave has drained his brain of the remains of the Creation Matrix and that the remainder is stored within the mind of...

Buster Witwicky, who has not previously appeared in a UK originated issue, but who’s confusion about his new powers continues here, as he is apparently able to fix a broken tape deck with his mind (it plays “Glory Days” by Bruce Springsteen, for the trivia-minded).

Sometime later we are told that Ratchet has been able to repair “some of the Autobots” which is slightly irritating in its vagueness, but Wheeljack and Prowl are pictured as now operational and the medic is beginning his work on Jazz. Ratchet laments that he does not know if Sunstreaker will ever be operational again, totalled, as he was, by Shockwave in “The New Order”. Suddenly, Wheeljack, scanning for Guardian’s signal finds some surprising readings.

We don’t find out what they are yet, however, as The Dinobots are just about to join battle with the droid once again. Allowing Guardian to think he has the drop on them, Grimlock and Snarl wheel around and hack at it with their energo-swords before the other two Dinobots blast him at point blank range.

As the Dinobots move in for their killing stroke, Wheeljack confirms his readings - Shockwave has left a thermo-nuclear bomb within Guardian and the Dinobots are about to accidentally detonate it!

This story and the next, “The Wrath of Grimlock!” really are parts one and two in a two part story, and therefore it is fair to say that despite the titles, it is really in “The Wrath of Guardian!” that Simon Furman begins his long-standing love-affair with the Dinobots and especially their leader. His previous writing for the Dinobots were as passive observers of humanity and attentive listeners to Ratchet’s story. Now he begins to give them personalities of their own and really lets them cut loose. I am tempted to side with Grimlock against Ratchet, who shows no appreciation for the Dinobots’ bravery in battling Guardian, but it

is understandable, given the pressure that Ratchet is still under. The conflict between the two is entertaining and a clear personality clash. Ratchet has found himself in charge through circumstances beyond his control, and Grimlock is a naturally unsubtle “take charge” type who doesn’t possess all the facts or the ability to do what needs to be done, that is to repair the fallen Autobots. It is no surprise that sparks fly.

Furman’s scripting is typically excellent, and he seems especially at home when describing science-fiction type concepts like the specifications of Guardian. The best page for this is also the most memorable. It is split between Ratchet’s analysis of Guardian and shots of Sludge being picked up by the Battle Droid and being swung by the neck like a club. A touch of continuity here is a reference to Guardian being vulnerable to strong magnetic fields, which is presumably how Windcharger was able to subdue him in “Raiders Of The Last Ark!” I especially like the way Guardian’s speech is handled, with the traditional plus symbols used to denote computer print-outs. If he had been an Autobot, as the script suggests, there cannot be anything left of Guardian’s personality, as he has now been used as a mindless drone by both Auntie and Shockwave. Certainly he cannot have been a normal Autobot as none of his former comrades express any dismay at his sad fate.

This issue has the most continuity with the US issues of any so far, and it is more than welcome. It is almost inevitable to see the US book as the main continuity thread, and the UK stories as optional bolt-on extras. This will lessen somewhat as Furman gains more confidence and starts to develop his own continuing plotlines, but for now, his foreknowledge of US issues to come makes for excellent development of the themes they contain. You don’t need to see Shockwave and Prime’s segment in this issue to follow and enjoy “The Next Best Thing To Being There!”, but for UK readers it would have really expanded the scope of the story to be able to wonder beforehand exactly what those new brain modules will become.

This is Kitson’s first interior work for Transformers and it slots in perfectly after John Stokes’ exemplary effort on the previous story. I do slightly prefer Stokes, his line work is more precise and he painstakingly draws in every single detail. Kitson is slightly more impressionistic, but only slightly. The robots he draws are still, in the main, more detailed than the animation models they are based on. I doubt I would have noticed any change in quality if I had been

simply reading this comic for the sake of the story. Kitson’s finest work is probably on the page of Shockwave talking to Prime. Shockwave is detailed and dynamic and the machinery keeping Prime’s head alive is particularly intricate. I was also impressed with the first page, where the Dinobots charge Guardian. Kitson lays out the fight scenes in a comprehensible manner and his facial expressions are excellent, particularly on the scene where Ratchet watches Guardian fight the Dinobots. I really appreciate that when Prowl is back online, he obviously has a different facial structure to Ratchet. Enough comic artists have trouble doing this with humans, let alone robots. Gina Hart is now a veteran of colouring Transformers and she does a typically decent job. Snarl’s dinosaur mode head is the wrong colour, grey rather than gold, but you would really have to be nitpicking to care, particularly considering some of Yomtov’s howlers.

“The Wrath of Guardian!” is a fair slice of what Furman does best; Transformers as a varied science-fiction story without too many squishy humans gumming up the works. He skilfully continues character arcs that began in comics that did not even originate in the same publishing house, and makes it feel absolutely natural and the art is lovely. If you can get hold of a copy, there is no reason not to read it between rereading US issues #8 and #9.

Great Sunday review, Bish! You comment that there's no reason not to read this issue between US #8 and 9. I'd go so far as to say that reading this issue (and its follow-up) between 8 and 9 makes for a much more satisfying reading experience. The Autobots, instead of getting fixed offpanel, are shown getting repaired. The mysterious absence of the Dinobots, explained. In short, most of the weaknesses between #8 and #9 are patched over while simultaneously giving the Dinobots some great characterization. Highly recommended.

Plus, Optimus clarifies more how the Constructicons were created even though he doesn't have the Matrix computer program anymore.
(I just came across Bob's description of the Creation Matrix program in an old Titan TPB reprinting the US comic, it's fun stuff, and completely different from how the Matrix was later portrayed in both comic and cartoon).

And... you gotta love how the now legendary artist Barry Kitson draws Shockwave's head about ten times bigger than it's supposed to be :-)

Whoa. So... Bruce Springsteen AND Brick Springhorn both canonically exist in the Marvel Comics universe?!