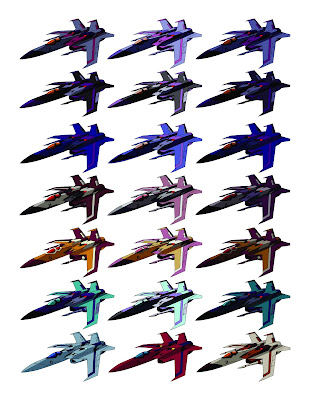 Well, it looks like Bish won't be posting his review today, so I thought I'd throw something up. I'm in the final phases of The AllSpark Almanac, finishing up the episode guide and then adjusting all the levels to give a nice, constant brightness. As usual, I've made too many pages. Don't worry, this is a good thing, it means what makes it into the book will be even better. I figured I'd share a page that I'd played around with.

This page was designed to . . . well, I'm not sure what exactly it was designed to do, which is one of the reasons I'm not using it in the book. Starscream's jet mode is the most frequently recurring image to appear in the show's model pack, followed by the Starscream robot model with various lighting conditions. I thought it would be interesting to show it off in the day/high-con/night colors, along with the bottom row which is the human jet that Starscream scans, the Crimson Angel model, and the first sycophant clone. (The first coward clone never Transforms, so they never colored a jet in). I think I was considering this as maybe an interstitial page, an inside cover page, or to go opposite one of the literary pages to get the facing to work right. Ultimately, there just wasn't room, and there were too many other, more interesting elements to use as interstitial / literary elements.

Incidentally, if you're wondering, a partial inspiration for this came from a set of wallpaper that I had in my room growing up. It's called The Wrong Brothers. I hope you enjoy it. And if you're sad that this page won't appear in the book, have no fear. 8 of these 21 images are slated to appear in the book, and much larger than they'd be on this page. At least, that's my current thinking, these things do change a bit. Yes, Starscream and clones get plenty of love.
Posted by Jimtron at 5:24 PM

Are all of these jets based on specific Transformers, or are some of them just made up? (I recognize a lot of the color schemes, but not all of them...)

Ah, a fair question. I forget that not everyone watches Animated.

From top to bottom:

The bottom row is the jet Starscream scans, the Crimson Angels stunt plane, and the first sycophant clone who blew up.

This page is a thing of beauty! Cannot WAIT for this book! Please continue to post discards, no matter how obscure. :)

Sir! You have just insinuated that you are aware of some kind of name for the Female Starscream!

Here are my guesses:

Aw... I'm gonna have to get used to thinking of her as something other than "Nightscream"? :(

Surley her name is Susan!

I really want to get my hands on this book.

I'm guessing theres a lot of stuff you can't fit in this book...will there be a volume 2?

Caitlin, to your comment, there is a TON of stuff I can't fit in this book. I sure hope that sales are strong enough to justify a V2, because I think with another 208 pages or so I can REALLY finish my examination of this fantastically creative universe. There are vast swaths of the Animated tapestry that I just had to omit completely, on the theory that I'd rather examine a smaller number of areas exhaustively than a larger number in a more cursory fashion.

I'm more inclined to go with "Slipstream" as the female clone because - as hilarious as it would be for her name to be "Slutfire" - I just don't see that happening.

I just want you to know how much I wish I was working on this book. :)

Also, is this gonna be comprehensive to the whole series, or just the first 2 seasons?

The Crimson Angel one I can always pretend as Armada Starscream. :3

When does this come out again?

But Jimtron clearly knows her real name. My money's on Slingshot. But then again, I'm not really putting money on it.

I've got it! It's SLUGSLINGER!

Also, very cool! Can't wait to get the book.