The creative team remains unchanged for part 2. Simon Furman concludes the story, John Stokes provides the art and the colour is added by Steve Whitaker. It is not entirely clear who the cover is by - tfwiki.com suggests Jeff Anderson as a possible, but there is a signature on Prowl’s upper arm that simply says “Mike”, so I am going to go out on a limb and credit Mike Collins. Certainly there’s nothing in the art that hints at anyone more likely than him, and the style is similar, but it is difficult to be completely certain because this would mark the first time that Collins used the standard animation models rather than the toys for reference.

Its not quite such a fun cover as last time, but it is still a good piece. Ratchet tries to revive a drenched Prime after his fall, while Prowl looks up at the dam in shock as Megatron, in gun mode, punches a massive hole in the concrete. In jet-mode, in the background, are Starscream and another Seeker coloured rather similarly to Blitzwing, but unmistakably an F-14. I am still very pleased that the entire cover is now taken up by the image. Pleasingly, Prime now has a grey faceplate, for the first time in the UK comics, but this will not be carried on into the interior. While I do not care for captioning getting in the way of cover art, the varied colours and styles of lettering on this one is very well done.

The issue opens with the obligatory re-cap of the previous issue, marred somewhat by the mistake in the script that calls the dam “Boulder Dam” when it was clearly “Sherman Dam” last issue (this was corrected for the collected comics and winter special versions). Since we no longer have to wait between weeks for the next part of the story, these re-caps tend to come across as wasted space, but occasionally they contain something worthwhile, and this ones allows a few extra panels of dam-based brawling from Optimus Prime and Megatron, which I’m always glad to see.

As Prime is hauled out of the water, Megatron destroys the dam before making good his escape. This is an odd sequence, because the Decepticons appear to have been defeated off-panel. Megatron beat Prime, Rumble beat Hound, but still Megatron seems to think the Autobots have “thwarted [their] schemes.” I can understand focussing on the duel between Prime and Megatron, but we’ve previously seen no hint of Autobot success in this story, which makes for a rather confusing continuation. As the dam bursts, Prime utters for the first time (I think) a phrase that Furman will use more than once in times of shock: “By the celestial spires!”

Prime sends Prowl and the fastest Autobots to the nearby human settlement to evacuate the populace while the other Autobots try to slow the water’s advance by creating a new dam with rocks blasted from the canyon walls. They continue by digging trenches “WITH YOUR BLASTERS!” as Prime says rather over-dramatically. Eventually the water proves too powerful and sweeps them away.

Meanwhile the other Autobots are evacuating the humans. Sideswipe and Jazz have a race with people clinging to their roofs, which seems rather irresponsible given the emer

gency. As the water approaches, Bumblebee, who has somehow escaped the torrent and arrived in the town with the other Autobots leaps into Ironhide and uses his vehicle mounted blaster to carve more trenches for the water to escape into. The village is saved, with no real casualties, but the human inhabitants are not happy. They heard that giant robots attacked the power station and here the Autobots are, clearly also giant robots. Mirage tries to argue but its futile.

Ratchet has been using this incident as an example of why the Dinobots really should stay away from humans as much as possible. “They think different equals evil.” and some humans can’t tell them apart. We cut then to Josie Beller, in her hospital bed, preparing to become Circuit Breaker (with a panel lifted directly from the US comic, albeit recoloured). Blackrock features as well, with the cannon he plans to use against the Transformers.

Ratchet’s story over, Swoop flies on ahead to Mount St Hillary, despite Ratchet’s misgivings about a possible Decepticon presence remaining in The Ark. As he lands, a gigantic shadow falls over him while a mysterious narrator relays scanning data too us. Ratchet and the other Dinobots arrive just in time to see Swoop being pummelled by the dramatic re-emergence of Guardian!

Its a pretty good script, though not in the main a very exciting one. The dramatic high-point of the Sherman Dam incident is the duel between the leaders and that is over by the time this issue begins. As with the previous issue, a good deal is taken from “More Than Meets The Eye: Part 2” but the ending is changed for dramatic effect. In the cartoon

, the reaction of the townspeople is “Thanks, neighbour!” but in the comic it is mistrust and hostility, a much more interesting ending. Continuity errors do mar the flashback segment though. Megatron’s conceding defeat for no reason and a mysteriously teleporting Bumblebee are pretty well inexcusable, and I repeat my criticism from last week that the fall from the dam into water shouldn’t have been much of a cause for concern for Prime’s life.

Back in the present, I find the foreshadowing of Circuit Breaker and of Blackrock’s cannon ahead of their UK debut in Issue #34 to be very interesting. I thoroughly approve of Furman, obviously having advance knowledge of US scripts to come, slipping this material into the UK only book to marry the two more closely. The reappearance of Guardian is also very welcome, after his somewhat ignominious defeat in “Raiders of the Last Ark!” Its a thoroughly interesting cliff-hanger to end a two-part story on and it helps to turn a completely throwaway effort into an interesting part of continuity.

Stokes’ art is just as good as last issue, although there are a couple of panels tha 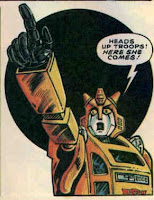 t amuse me, both involving Bumblebee. The first, as he gets swept away, with his eyes as wide as saucers he looks rather comical and somewhat cute, especially as Stokes has given him pupils. In the second, he stands with his finger pointing dramatically, looking surprisingly angry with some fierce horns - he appears to embody the epitome of short robot syndrome. Overall, however, everyone is on model and the detail in the line work continues to be exceptional. The Dinobots, in particular, are worthy of some praise, with every fiddly little mechanical doodad that their toys have and that the cartoon never bothered with, all lovingly drawn in. The final panel shows Guardian as a huge, mean, bundle of metallic muscle, gleaming and ready to kill - an absolutely terrific rendering of a menace to take seriously.

The colouring continues to impress, Whitaker’s work contains a depth and degree of colour that its impossible to fault - every panel looks like a painting and while there is some block colouring - it is more for the purposes of lighting and atmosphere than for expediency, at least that’s what it appears to be, and that’s what counts.

All in all, “Decepticon Dam-Busters!” wasn’t a bad little story. Its completely non-essential, but slightly more satisfying than the UK originated issues that preceded it, because it does at least fit into the main storyline without much fudging required. That, combined with the fact that Furman really seems to have a handle on these characters now, makes it worth a read.

This comic was reprinted in “Collected Comics #5” and The 1993 Winter Special.
Posted by Bishbot at 10:24 AM

I just noticed that wide-eyed Bumblebee panel, Bumblebee's head is traced from the cover of US TF comic issue #2, just rotated around. What's with the weird copying from the US book's art in this issue?

Yeah it is weird - I can't say I noticed really - because its a long time since I read the US books.

It was probably a time thing, don't you reckon? This story feels like it must have been filler, because it was copied from a year-old episode - maybe they had to do the art quickly as well.

Still, the UK colouring really makes up for any repeated art, to my mind.

There's actually a bigger continuity problem than the Cons' retreat, or even Bumblebee's locations. In part 1, the Decepticons are clearly using the dam's power to make Energon cubes!

Not only is this before their introduction in US#14, but this is supposed to be during the time when neither side knew how to convert Earth's energy, and even once Sparkplug showed them how, it was still liquid, and presumably non-glowing. I suspect Furman didn't change that part because converting hydroelectric power into liquid fuel would make even less sense, and it's not impossible to rationalize: these energon cubes were still experimental, and ended up being too unstable to use, forcing them to fall back on Sparkplug's conversion process. Shockwave was the only one who knew how to properly refine energon, so it couldn't be used until he whipped up that device in issue #14, likely at the behest of Hasbro, much like the space bridge.