I've actually had these guys since Christmas, and intended to write a more timely review of them, but there have been so many other great toys coming out lately that I've had a steady supply of new material to write about for several weeks running. This is the first week in a while that I haven't found anything new (aside from some Smurfs figures that I'm sure nobody here wants to hear about), so I'm finally taking the opportunity to write a little bit more about these wonderful little toys. 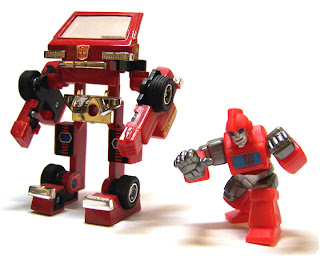 IRONHIDE
Most of the Robot Heroes based on G1 characters have taken their cues from both their Sunbow animation models as well as the original Hasbro toys, creating an interesting amalgam of design features that still makes the characters recognizable, no matter which medium you may be the most familiar with. This certainly isn't the case with Ironhide, who bears absolutely no influence from his 1984 toy; he's completely the product of Shôhei Kohara's original animation design. Now, it just so happens that Ironhide and Ratchet were two 1984 toys that I never owned as a kid; I simply had no desire to spend my hard-earned allowance money on gimpy, headless robots that looked nothing like the characters from the TV show. I only just barely picked up the Takara encore reissue of both toys last summer, in fact. I'm at a point now where I can look past the inherent un-cartoonishness of the toys and appreciate them for what they are; the early Diaclone designs have a certain charm in and of themselves.
That said, I certainly don't begrudge the fine folks at Hasbro from using the cartoon version of Ironhide as the basis for the Robot Heroes toy; it's a far more recognizable and iconic look for the character. A more toy-inspired Ironhide would have wheels on his arms and feet, which would have ruined the quaint simplicity of his cartoon styling. (While a headless Robot Heroes figure might be an interesting novelty, can you imagine the endless string of complaints from fans?) On the other hand, it would be a little more consistent with the rest of the toys in the series; Ironhide almost looks too plain and lacking in detail when compared with some of the other figures in the line.
Ironhide isn't completely unlike the PVC version available in Japan in the Super Collection Figure line and later through Hasbro under the Heroes of Cybertron banner. The PVC figure actually suffered from a misproportioned sculpt, since I suspect the person who designed the figure was taking the foreshortened human's-eye-view of his model sheet far too literally, resulting in large feet and a disproportionately tiny upper body. The Robot Heroes incarnation of Ironhide, meanwhile, was created this way deliberately, with the characteristic oversized head and gigantic, chunky arms and hands typical from this toy line. He's advancing on one foot, with one fist closed and the other hand open as if he's about to either give a well-deserved high-five to a fellow Autobot, or deliver a smackdown to some unsuspecting super-deformed Decepticon. Whatever it is that he's up to, he's smirking delightedly so he's clearly quite happy about it.
Ironhide's cast entirely in bright red plastic, with the parts that are normally black or grey in animation (his fists, shoulders, and upper legs) depicted here with shiny gunmetal paint. It's not an altogether horrible look for the character, but it's a little different from the way he looked in the original cartoon series. What's really distracting, though, is the placement of his Autobot symbol, which somebody decided would look really good smack-dab in the center of his chest—which is, of course, also his front windshield. I realize that the proper placement for his Autobot badge (between his windshield and his front bumper) may have been too difficult to apply with a tampograph, but the windshield thing really bothers me. It's just a pet peeve of mine. You need to be able to see through that windshield when he's in van mode, and you can't do that when there's a giant red robot face badge blocking your view of the road. What would have been wrong with, say, putting the Autobot symbol on his shoulder instead? In any case, it's only this one flaw that mars an otherwise excellent representation of the character. 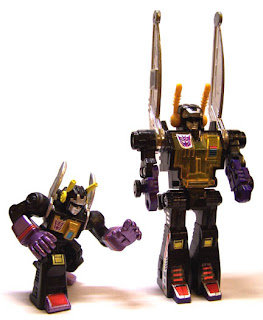 KICKBACK
Kickback was the first of the three original Insecticon toys I owned. He's not really my favorite, though. (That distinction belongs to Bombshell, because of his cool cerebro-shell stinger, and the fact that I love all of Michael Bell's voice performances.) It always bothered me how cheatsy Kickback's transformation was, since all you do, essentially, is lay him down on his back and rearrange his limbs a little. It also bugged me how his head was visible even when he was transformed into insect mode—at least until the cartoon came along and depicted him in the exact same manner, thus validating the toy's design in my mind somehow. The Robot Heroes version of him is the first time the character has appeared in any form in many years, ever since he died a fairly ambiguous death in The Transformers: the Movie (and may or may not have returned briefly for "Five Faces of Darkness," depending on how much you want to trust the third-rate Korean animation studios).
The sculpt is a really good likeness, though it's based far more heavily on the 1985 toy than the cartoon design—right down to the rub symbol indent on each of his wings and the screws holding his shoulders and hips together! The most significant change here is that Robot Heroes Kickback actually has hands; the Hasbro version of the character actually had claws (when he transformed, each of his arms split in half to form two of his grasshopper legs). His head sculpt does show some influence from the cartoon model, sporting more conventional square-shaped goggles as opposed to the strange triangular-shaped visor that also appeared on toys like Swoop and Blaster. Where the Robot Heroes incarnation of Shrapnel (aka "Insecticon") had long, prominent antennae on his shoulders, Kickback's grasshopper wings are sadly understated here, giving him almost Action Master style proportions. He's the most dynamically-posed of the three Robot Heroes Insecticons; with his left hand raised, he looks like he's greeting an old friend (and is about to con him out of his lunch money); with his right hand raised to his head, he looks as if he's proclaiming, "Eh? What's that? Can't hear you because I'm too busy screwing you over!" He's got three points of articulation, at both arms and the head; his right leg also looks like it should be able to move (it was cast as a separate piece of plastic in the production mold) but it is firmly glued in place.
Kickback is colored very much like his original toy, with plenty of color applications that are designed to mirror the consumer-applied stickers, as was done with Shrapnel (and Bombshell, aka Hardshell, to a lesser degree). The only major gaffe is the color of the insect legs embedded within the backs of his robot legs, which should be purple instead of silver. Aside from that, his colors are sensible and accurate, and they come very close to matching the hues used on the other Insecticons (though the purple on Bombshell is a little muddier). While Shrapnel and Bombshell have some awkwardness to their sculpts, Kickback is really quite dynamic, making him my favorite of the Robot Heroes Insecticons.
Now, if only Hasbro would get cracking on those Robot Heroes Constructicons!

I got these two figures. My two complaints are they are too small and they do not stand up properly. They lean and fall. : ( I'm assuming they are making these things with less plastic to save cash. Otherwise why have Bumblebee bigger than ironhide?

I don't mind the logo on Ironhide's chest... And Kickback's colors are awesome. If only they stood upright!

Making a figure out of less plastic really doesn't save Hasbro much money, since the cost of the tooling and casting the production molds is their biggest expense. You're right about the size issue, though. I guess Hasbro just isn't too concerned about making these figures properly to scale with each other. (Have you seen Robot Heroes Thrust? He's a munchkin!)

Yeah... It's less about them being in scale with each other. I gave up on that with unicron. ; )

I just think they should all be roughly the same mass/size. That's the fun. Yeah, Thrust should be renamed Thrus.