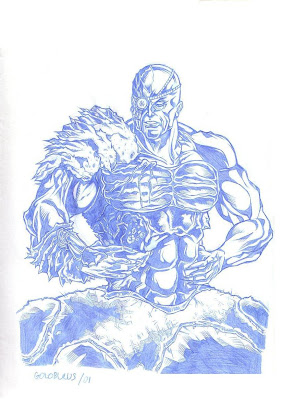 Happy President's Day! It felt like a weekend, so I got a little behind on my posting. Anyway, Monday's are Iván's time to shine. This week he brings us Golobulus. Here's what he has to say about it.

I was a child when I first saw the G.I.joe movie.. the opening is wonderful.
I love it. Long after the saw again, and I could see surprised that the movie had a great pace.
I also believe that Golobulus is one of the great characters of GIJoe was not easy to overcome serpentor or cobra commander, but , this new rage is extremely interest, the civilicitacion of Golobulus was very attractive ,
and gave a sense of the strange origin of the commander. Pity that, as tends to happen in these cases, the potential golobulus was not maximized, and only remained in the film.
But as I said, the idea of the spores, or the idea of destroying humanity as I found then and I still seem very good.
The animation was just as good, could have been done today and the official movie as well.
I found it strange that there was no one in the comic adaptation, Golobulus, Nemesis Enforcer and Phytona, great characters.

Can't say I'm much of a Golobulus fan, myself. Burgess Meredith gave the best vocal performance in the movie, admittedly, and I do quite enjoy G.I. Joe the Movie on the whole.

That said, this is some great artwork!

while I'm a Fan of the GIJOE movie as a separate entity.. I'm glad that Cobra-la and Golobulas were never shoe horned into the Comic book..

I'm a pretty big fan of the G.I. Joe / Transformers books that Devil's Due put out, and was pleased to see Cobra-La given a chance to shine. It's a shame that the implied fifth mini-series, with Iron Klaw and Sgt. Savage, never came about.

I admit I was just as taken aback by Cobra-La's sudden appearance on the scene, but I think it added an extra dimension to the story that was missing (who didn't wonder what Cobra Commander really looked like or where he came from?).

They have nothing to do with Cobra at all.

As we have seen, they have those bugs which can induce dreams into people, now who's to say they can't mind control aswell?

Dr. Mindbender probably had something in his blood (the guy's a whacko scientist :P ) that prevented mind control part and was only left with a confusing dream/vision.

The trial was later staged to fool the non mind controled Cobra operatives.

Also note that at some times C.C seem to regain control over his mind.

Speaking of him, he doesnt have blue skin! We saw his hands once and we saw area around his eyes whenever he wore his hood.

And note that when he ripped his shirt revealing blue skin, the transformation into the reptile has allready begun before the ripping bit!

Another thing to convince non controled Cobras that they speak the "truth".

Whole thing was about gaining Cobras resources. With Cobra, their plans of conquest would be easy.