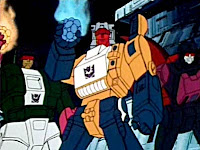 This is the final chapter in the opening three-episode arc of the Takara series, Transformers: Headmasters, and as often happens in these Japanese series, the title pretty much reveals the crux of the story. This episode opens with the Headmasters, following Chromedome's pronouncement in the previous episode, now joined up with Hot Rod/Rodimus to continue the search for the Matrix, which is still hidden away in a secret "energy zone" on Earth to recharge. Meanwhile, Galvatron has arrived on Earth to discover more about this search operation and also introduces Cyclonus to Sixshot, who is the commander for the Earth-based Decepticons.

As I noted earlier in regards to Kup and Arcee, several characters have their personalities softened or changed outright in this new series and unfortunately Cyclonus suffers such a fate. The third season of the US series seemingly offered fewer new characters that connected with the long-time fans, yet the proud, loyal and capable Cyclonus became an exception. He was portrayed as fiercely loyal to Galvatron, not in a sycophantic fashion since he was intelligent and cunning on his own, but instead out of genuine concern and care for the new Decepticon leader, as evidenced in the episode "Webworld". It was almost as if he saw Galvatron as family, a father figure, acknowledging his shortcomings and flaws and yet confident that he would never leave his side. In the Takara Headmasters series, Cyclonus seems to have had his mechanical spine removed, as he displays only empty arrogance in his abilities, cowers easily and is included in moments of comic relief. Along with US season three characters Springer, Kup, Arcee and Scourge, Cyclonus is soon sidelined completely here.

The Technobots and Protectobots arrive on Earth to assist Ultra Magnus and his team in defending Hot Rod in his Matrix quest. As we see Defensor battle Bruticus, the search is widened beyond the secret bases, Hot Rod noting that perhaps the Matrix is being kept somewhere obvious, hidden in plain sight, as it were. Back on Athenia, Fortress informs Kup, Arcee and Blurr that he is heading to Cybertron to track down Optimus, who is still journeying deep into the planet to check Vector Sigma. Meanwhile, Hot Rod and the Headmasters reach an energon mining facility, encountering the Terrorcons in the process. Combat ensues while Hot Rod is able to sneak inside and finally locate the Matrix. He attempts to depart in all haste to the space bridge, but is halted by Galvatron and the Decepticon Headmasters. During this fight, the Matrix is tossed about and almost captured by Galvatron, yet Chromedome and Computron intervene, allowing Hot Rod to escape. Along with the Trainbots and Chromedome's team, they dash to Cybertron through the space bridge.

As Fortress races to find Optimus on Cyberton, there is concern that an unstable Vector Sigma could cause destruction to the planet itself, and we get a foreshadowing of what that could look like. An unassuming viewer would never expect this tragedy to come to pass, but the series does hold some awful surprises later on. As Optimus and his spirit guide, Alpha Trion, continue on their way, a strange voice is heard, advising them to turn away from danger ahead. Thanks to this, the chamber of Vector Sigma is finally uncovered and Optimus hopes that his own energy could stabilize the mother computer. He is suddenly halted by Cyclonus and Scourge, waiting in hiding. Of course, who knows what secret passage these two found to allow them to reach Vector Sigma first, but regardless, they are an obstacle.

Prime takes on both Cyclonus and Scourge. Alpha Trion prepares to disperse his own energy to help Vector Sigma, but he hears that voice again. Even though the viewer has been made aware, he now discovers that the voice belongs to Fortress, who does not stop to explain his power at this moment, instead rushing into the chamber to help Optimus. Hot Rod and the Headmasters arrive with the Matrix as Galvatron and his team, obviously taking the same secret shortcut as Cyclonus and Scourge, join the fray. Another battle begins, but off in a corner Alpha Trion commands Hot Rod to hold up the Matrix. Alpha Trion then disperses his own energy and wisdom, disappearing completely in the process, but resurrecting the Matrix fully as a result. With a renewed Matrix in his possession, Hot Rod is seen resuming his persona as Rodimus Prime and in standing alongside Optimus, we witness the title of the episode – "Double Prime'"!

The two Primes clear a path through the Decepticons, flinging Galvatron into a nearby wall. They reach Vector Sigma and while it is not quite clear what they plan to do, it seems that energy is exchanged between Optimus and the Matrix, most likely the cosmic wisdom which could then be deposited into the mother computer, stabilizing it. However, Galvatron jumps Optimus, seen strangling him in the same fashion as when he strangled Hot Rod while inside Unicron. The Decepticon leader is forcefully tossed against Vector Sigma. A build up of energy occurs which Optimus absorbs. Afterwards, Vector Sigma appears calm and restored by this action as the wisdom from the Matrix, given to Prime is then passed to it. At least, that is what I deduce has happened. Regardless, this entire exchange ends up draining Optimus and he dies in Rodimus' arms, as the Decepticons flee. The episode closes with a narrated montage, describing how there will be a counter-attack by the Depecticons to gain control of Vector Sigma, but that Rodimus must follow the wisdom of Optimus, fighting for Autobot victory and peace.

As Chris McFeely notes in his excellent episode commentary on this DVD set from Metrodome, it's pretty obvious that the Japanese writers were only too eager to kill Optimus Prime, perhaps disappointed that he was resurrected by popular demand for the American series. There seems to not be any nostalgic attachment to the character, the writers simply wanting to move forward without retaining too many elements of previous seasons. It could be that they just wished to differentiate their first home-grown attempt at a Transformers series and felt that had Optimus continued to be Autobot commander it would have tied their hands too much to the direction of the US series. To play devil's advocate, I can understand this line of thought. I too wonder if the presence of Optimus Prime is too much of a crutch, even in the various comic series produced during this decade, and would be interested in seeing stories about different Autobot leaders. Of course, I've always been a huge fan and missed him when he was absent from both the television and comic series in the 80's, but I was also intrigued at the different tone and story possibilities inherent in assigning the task of leader to a new character, such as Rodimus Prime. In this case, however, we shall see that not even he is long for this series and Fortress is being "primed" to become the dominant Autobot.
Posted by Brian at 3:04 PM

Great review, interesting to know about the similarities to and differences from the Sunbow cartoon. I haven't watched these episodes yet, but I suspect your opinion would be quite similar to mine.

A lot of discussion of the Japanese series that I've seen seems to be a little marred with people either too pleased with the Japanese-style novelty of the thing, or, on the other hand, just unable to watch because they're too different.

Neither is a very interesting viewpoint. I prefer your way - to point out what works when credit is due, and what doesn't, when it isn't.

Good point about Cyclonus. He seems to have morphed into a sort of middle-aged middle-manager here, secure in his position because he's been around longer. It's an odd archetype to choose for the loyal, powerful and capable Decepticon 2nd in command from S3.

Thanks, Bishbot! Yep, that's the tone I'm aiming for one, knowing that the "it's either all good or all bad" perspective doesn't leave much room for discussion. I can understanding dismissing the dubbed version outright, but the subtitled series stills holds interest. I don't agree with all the choices made for this series, such as what happens to Cybertron, but it doesn't stop me from accepting the series on its own terms...

Jimtron - Ah yes, "The Complacency of Cyclonus" should have been an episode! Find out how he lost all backbone after "The Return of Optimus Prime"! :)

I think I heard somewhere that it was a cultural thing- something about it being taboo that they resurrected Optimus Prime after he'd already died. I'm not 100% on that. Not to mention the fact that they already made money from using him so they no longer 'needed' him.