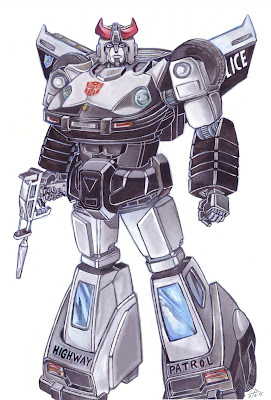 This week, Ivánbrings us one of my favorite characters, Prowl. Prowl was the first Transformer toy I ever got, and I like the idea of an intensely rational Autobot 2nd in command. I also enjoy the Furman interpretation of him being somewhat ambitious, but frustrated by is inability to rise higher than he is due to his lack of charisma. Anyway, here's what Iván has to say about Prowl and this piece.:

It was never a character that interests me too, for me, was the equivalent of seekers.
but the fact is that only gave importance to Prowl.
But the truth is that you do not remember anything particularly heroic, or a sentence or chapter.
So I think he is a missed charather, anyway I like the most is smockescreen has a very nice color combination.
As a toy, the figure of 84 I think this very well, as almost all of the time,in fact I think there is a model of the three brothers who is blue and gray, corresponding to Japanese silverstrak which is tremendously expensive.
I believe that this combination of color fail to appear anywhere. The truth is that the classic mold is the least like me, has very long arms and I think that is too thin.
But it is a character who, I suppose that as the firsts in the series, is healthy in terms of merchandising.
The bust of hard hero was the best in the collection and also editions toy rocket are very good.
For all this there is a mythical character, one of the thirteen, without a doubt.

That's true—Prowl never really had a spotlight episode the way a lot of the other Autobots did. (I think it's funny how he's colored black-and-white, and that's basically the way he perceives the universe. Coincidence, or something MORE...?)