“The Wrath of Grimlock!” script was by Simon Furman, art duties were divided between Barry Kitson and Mark Farmer. It was coloured by Steve Whitaker, lettered by Mike Scott and edited by Ian Rimmer. Will Simpson provided the cover.

Which is excellent. Not complicated, it shows Grimlock’s dinosaur-mode head in close-up, roaring in defiance (or wrath) against a flaming background. The caption is evocative too: “In the flames of battle - The Wrath of Grimlock!” The Dinobot leader’s wrath might be a little over-stated by this cover, and by the title itself, in fact, throughout the story, he is mostly just a bit peeved, but that does not detract from such a striking portrait.

We are treated to a little summing-up of the situation as left by the cliff-hanger ending of Issue #31. Grimlock is about to execute Guardian, ignorant of the nuclear payload that the Battle Droid harbours within himself. The other Autobots have picked up the problem on sensors, but are unable to communicate with the Dinobots. Suddenly, Wheeljack hits upon a plan. Using a computer signal he is able to manipulate the headless body of Optimus Prime (which stands impassively beside the Dinobots) and use its hand to grab Grimlock’s to stop him pulling the trigger. In the understandable confusion, Guardian sees his chance and punches out, escaping once more into the bowels of the ship. In the fight, Grimlock gets his hand torn off by Prime’s unfeeling touch. (I enjoyed this use of Prime’s body because the explanation for it is one that Furman will use again much later in the UK run, in the excellent re-animated Transformer zombie story “City of Fear”).

We cut to Ratchet fixing Grimlock up. It seems to be a simply procedure, and Grimlock does not seem to be in any pain from his injury, but he is understandably upset, and, in a classic Grimlock moment, punches Ratchet in order to “test” his new hand (actually he punches Ratchet with the wrong hand, but the intent is amusing in any case). We get a nice bit of con 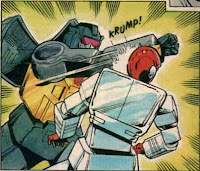 tinuity as Ratchet goes back to work on the fallen Autobots and Prowl tells him he should revive Windcharger because his magnetic abilities “stopped Guardian during that Auntie business”. While it is quite difficult to actually fit “Raiders of the Last Ark” into continuity without squinting a bit, it is good to see it acknowledged, and we finally get a definitive answer to how Windcharger was able to floor Guardian with one punch.

Meanwhile, Guardian rests up and assesses his options. He concludes that he cannot reasonably hope to defeat the fourteen Autobots now operational and activates his failsafe program. Which triggers a flashback of Shockwave and Soundwave discussing how Soundwave has implanted Guardian with the bomb that nearly went off earlier in the issue. I especially like seeing this, because it fits in neatly and explains why Shockwave let the Ark full of Autobots, albeit deactivated Autobots, seemingly unattended. He did not need to remain, having left the Battle Droid as both sentry and living weapon, thus freeing up his Decepticons for other plans.

As Grimlock hassles Ratchet about fixing Swoop Prowl and Wheeljack pick up the reading of the bomb again, seconds before Guardian smashes his way into the command centre! Grimlock leaps into action immediately, ordering the Dinobots to transform and rip Guardian to pieces. The in-panel clock-counter ticks down as the Dinobots tear off Guardian’s arm and generally rough him up. Windcharger is on his feet but not quickly enough.

Swoop, rising just in time, spots the bot who took him out and tries to shoot him. Ratchet stops him, succinctly explaining the situation. Faced with no alternative, Swoop does not hesitate as he immediately transforms and hauls Guardian off into the sky, as the bomb ticks towards zero. The winged Dinobot drops Guardian as the timer reaches 002 but there isn’t enough time. The Autobots look on in shock as Swoop is enveloped in the titanic explosion.

In the epilogue, the Autobots hold a funeral for Swoop, beside a beacon placed to mark his loss. The Dinobots stand silently as the other Autobots fire their blasters into the air. Shortly afterwards, the Dinobots take off to find their own destiny (explaining their absence from the upcoming US stories) and we are told that Swoop’s sacrifice enabled Ratchet to repair the other Autobots while a final teaser shows us Josie Beller in a hospital bed, testing her integrated weaponry and preparing us for “Dis-integrated Circuits!”

Although there’s no real distinction between “The Wrath of Guardian!” and “The Wrath of Grimlock!” in terms of story, I’m going to go ahead and say that this issue was Furman’s best script so far for Transformers. The opening narration, with its musing about how much can go wrong in a few seconds of time is effective in showing the situation and what can easily go wrong, and it is picke

d up again nicely as Swoop is just slightly too slow to release Guardian. Grimlock, Ratchet and Swoop get the lion’s share of characterisation in this issue. Grimlock’s anger at losing his hand, even though it does not inconvenience him terribly, and does save all their lives, is perfectly in character, and our sympathies are more for Ratchet this time, who only did what had to be done. Still, Ratchet does not seem overly bothered by Grimlock’s animosity, which, in reality, is mostly frustration because he was unable to stop Guardian.

The Dinobots are pitched perfectly. Despite their superiority complex, they always leap into action when they are needed, with the right amount of heroism and battle rage. They aren’t thugs, or unthinking barbarians, but warriors with a code of honour. It is extremely telling and, I think, poignant that when informed of the situation Swoop does not hesitate. For all the stubbornness and bitching and moaning that the Dinobots are capable of in their downtime, Swoop knows that he is the only one who can do what needs to be done and he does it without ceremony. His parting words to his comrades are simply “Well, we can’t have him running around here.” Of course, it can be argued that Swoop doesn’t know that he’s going to his death, but he has to know that its a very real possibility, we’re talking about a nuclear bomb here.

Similarly, it is entirely within character for the Dinobots to take off at the end. The narration might say that grief over Swoop was not assumed to be one of the reasons, but it seems more likely that this is intended to show the divide between Dinobot and Autobot. The Autobots cannot really understand the Dinobot way of doing things and the Dinobots are content to leave them in ignorance. As a unit they do not fit into the situation that the Autobots are currently in and, although it can be argued that simply letting them leave was rather irresponsible, the beleaguered Autobots are in no position to prevent them from doing anything that they want to do. Best to let them become an autonomous unit that can be asked for help later than resentful prisoners. The script does not say all of this, or even much of it, and it could be argued that this interpretation is a bit farfetched for an event that’s mostly included in order to correct a continuity error in the US book but I think that with the Dinobots and their unique status among the Autobots, Furman has really found a niche he is really eager to explore.

The art is mostly as good as the previous issue. tfwiki.net suggests that it are “a large number of drawing errors” but I feel this is needlessly nitpicky. I am inclined to forgive the artist for using Windcharger’s toy model, rather than his cartoon model, because this is his first appearance since toy models were the norm, so there’s really no precedent that has to be followed. The last page does have a strange number of generic Autobots at Swoop’s funeral and to illustrate that Ratchet has revived his comrades, which is an odd choice and cannot really be explained away. Other than that, however, Kitson and Farmer do a bang-up job and Whitaker’s colouring is virtually indistinguishable from Hart’s in the previous issue. The panel for Swoop’s funeral, generic Autobots aside, is especially well done, because it really shows off the difference between the Autobots and the Dinobots. The Autobots are very for

mal, saluting with their blasters and standing around the beacon, but the reader gets the distinct impression from the clumped way that the Dinobots are standing that they consider this unnecessary, that they can pay their respects with silent recognition, nothing more formal, and, in any case, Swoop was their comrade, they will mourn how they like.

So, an excellent issue, slightly mis-titled, as Grimlock’s wrath is not a particularly major story point after about the fourth page. The issue really belongs to Swoop, but admittedly, calling it “The Death of Swoop!” would rather have given the game away. This two-part story really helps to bridge the gaps between the US issues in a way that none of the previous UK stories had previously done, and comes highly recommended.

The story was reprinted in Collected Comics #6, and the 1994 Holiday Special but both reprints omit the final scene with Circuit Breaker.
Posted by Bishbot at 10:50 AM