Ever since they came out with Transformers Universe versions of Prowl and Silverstreak, I was hoping that they would eventually do a Smokescreen redeco. I knew it was virtually inevitable, and I also knew that I would buy the toy as soon as it came out. I was correct in both of these predictions, but what I wasn't prepared for was how utterly underwhelmed by the toy I would be. It's ironic that there have been so many toys in recent years painted into a G1-themed Smokescreen tribute, but the one toy that's custom-made to represent the character looks more like a parody than an homage.

The original Smokescreen released in 1985 had a couple of minor mold differences to distinguish it, physically, from Bluestreak and Prowl, who had come out the previous year. A racing spoiler was added to his back windows (which gave his feet a slightly different shape in robot mode) and an alternate front bumper was used (it covers up a good chunk of the front of the car, but the original front nose is visible if you take a peek underneath the bumper). The new version of Smokescreen is physically identical Prowl and Silverstreak, who both already had the racing spoilers, and the front bumpers of all three toys are identical. Some remolding to Smokescreen would have been appropriate, particularly since the cartoon version of Smokescreen, who first appeared in the second season, has a radically different (and decidedly more toy-inspired) robot mode design from the other two first-season characters. The alternate paint deco helps to differentiate him a little bit, but I have to question some of the color choices. 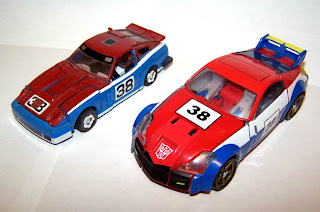 The new Smokescreen is an exercise in contrasts. For every aspect of him that they got right, there's something wrong about it, too. For example, in vehicle mode he's approximately the right color scheme, with a vibrant red and blue scheme accented with white stripes. The stripes are too wide, though, and cover too much of the upper half of his doors, and he's also missing the corresponding lower white stripes along the rocker panels and front bumper. He's also got yellow paint deco on his spoiler, which is odd and out-of-place (it may be there to call attention to the spoiler in a way that wasn't done for the other two). He's got the correct numerals "38" on his doors and hood (a lot of the Diaclone toys made simple letter- or number-swaps to evade trademark violation; in this case, Smokescreen's toy was based on the real-life race car driven by Don Devendorf, which was number 83). Furthermore, the size of the racing numbers, the placement, and even the font that they used are all slightly off in a way that, combined together, makes this a kind of half-hearted tribute. The numerals are too small, and there's too much empty space on the placards. Also, the numbers on his hood were placed much farther up, close to the windshield, which was probably done so they didn't interfere with the placement of his Autobot symbol. (You can't see the hood placard when he's in robot mode since his head is covering it.) 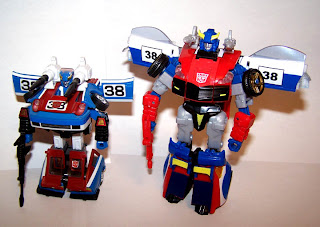 As a robot, his colors are even more disconcerting. Again, he's red and blue like he's supposed to be, but he only vaguely evokes the look of the original character because of the color placement. If the intent was to accurately reproduce the color mapping on the original toy, then the new toy's upper arms, lower arms, midsection, upper legs, handheld gun, and shoulder guns are all the wrong color. One or two changes like this would have been okay, but there were so many that I have to question the decision-making process here. Specifically, the parts on each toy that were molded the same color deserve examination. On the original G1 toys, all three characters had black forearms, and upper arms that were the same color as their bodies. You'd think that if Hasbro planned to produce this toy in three separate color schemes, they'd have planned for this. What's particularly troubling is that they managed to get Prowl pretty much right, so how did they manage to get Smokescreen so wrong? (Some effort was made to differentiate him from the other two by painting his face differently, leaving the chin unpainted to create the illusion that it's part of his helmet. It's a nice try, but it does little to help save the toy as a whole.)

Incidentally, the Henkei version of this toy got it very, very right. Maybe Hasbro's got some kind of licensing agreement with TakaraTomy that requires them to sell version of the toys in sufficiently different colors from the ones available in Japan? That would certainly explain some of the very poor color scheme decisions that Hasbro's made in recent months (SEE: Transformers Universe Powerglide; SEE ALSO: Transformers Universe Cyclonus). It sure would be nice if Hasbro got to flip a coin and was awarded the correct color scheme once or twice and TakaraTomy got saddled with the lame one; I grow tired of buying a domestic toy and then instantly regretting it as soon as I get to see pictures of the overseas version.

One item of note is that while Silverstreak had some major stress tolerance issues (I broke my first one just by trying to pose its legs and had to modify my second one because of the exact same problem), Smokescreen doesn't have this flaw. Either somebody noticed the problem with Silverstreak and fixed it, or else the specific combination of plastics just works better on this iteration of the mold than the previous one.

If you own both Smokescreen and Prowl, both toys can benefit significantly from swapping parts. If you pop off the shoulder launchers at the joint that connect to the body, you can give Smokescreen properly-colored white launchers, and Prowl can have grey ones. You can also pop their legs off the ball joints and slide the lower legs sideways out of their peg slots in order to switch their upper legs to trade their white and grey parts. You can pop off their upper arms and switch those around also, if you want to, but Smokescreen's really not supposed to have white arms and Prowl doesn't look any better with grey ones.

Overall, Smokescreen is the weakest of the three versions of this toy, which is a shame since he was the one version I was most looking forward to. To me, a half-hearted homage just doesn't get the job done; a more faithful rendering of the original character would have made me much happier. Now, Smokescreen was one of my first G1 toys, and one of the few Autobot characters of which I am a huge fan, so I'm probably more picky about him than most people. That said, if the whole point is to pay tribute to a character from the past, particularly when that character is really only familiar to discerning adult fans, then it really does need to be done properly.

I'm sorry to say that I agree. This is a toy that I was looking forward to, and which I will now likely not even pick up. I'd go so far as to call this attempt "amateurish." If I can justify the price of the import, it may be my first Henkei purchase yet.

I'm sorry to agree also but the domestic version is definately lacking. But because of you article I might just get it to swap out parts to Prowl. Now if TakaraTomy would stop with the chrome parts in Henkei. :( Oh well, SS will still be my first Henkei.

"Incidentally, the Henkei version of this toy got it very, very right. Maybe Hasbro's got some kind of licensing agreement with TakaraTomy that requires them to sell version of the toys in sufficiently different colors from the ones available in Japan?"

That is exactly correct. They can't produce the exact same toys as eachother. And, I'm betting, Hasbro figures it can get away with non-cartoon/G1 accurate colourings, while Takara knows that "anime" colours and near exact-G1 homages are reall the only way they'll sell toys in their market.

Great review. I can definitely see how being such a huge fan of a particular character can make one a bit particular when it comes to homages. It sucks to hear about what sounds like a design flaw with Silverstreak/Streak as I was interested in getting him.