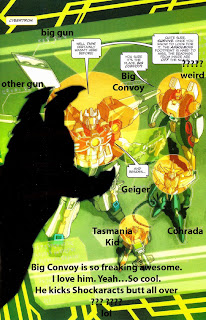 Over on the IDW boards, a Trans-forumer named Cerebros was asking about some Cybertronix translations. I figured that I haven't done any in a while, so I broke out my old decoder ring and this is what I came up with.

I know what some of you are saying. "Woah, woah, slow down there pardner! Cybertronix?"

According to Larry DiTillio, Beast Wars story editor extraordinaire, Cybertronix is the language spoken and written by the Maximals and Predacons. While we, the audience, hear English (or maybe Japanese or some other language), presumably they are speaking in their native tongue. Also, all the computer screens display information in alien characters, with a different set for Maximals and Predacons.

As it turns out, these characters were a simple English language character swap, so with a little bit of investigation I was able to figure out what all of the screens were saying. Sometimes the messages were accurate to the show - for instance, shield failure. Sometimes it was just random letters. But sometimes they inserted funny messages, such as a quote written in the Covenant of Primus. "And a mighty warrior came down from the sky, and a rainbow was upon his head, and his feet as pillars of fire. And the great dragon was cast out onto the earth, and his followers were cast out with him, a cork one fork and a bowl of beans between them". I converted these character substitutions into a true type font and distributed them for free back in the 90s. Fortunately, they still survive, and can be downloaded from the Transformers Wiki on the Cybertronix page.

Incidentally, only the upper case letters were based on the actual show. The above translation also includes lowercase letters, which I created from scratch as filler and were non-canonical . . . until this book was published, I suppose. Ah, ain't canon grand?
Posted by Jimtron at 3:15 PM