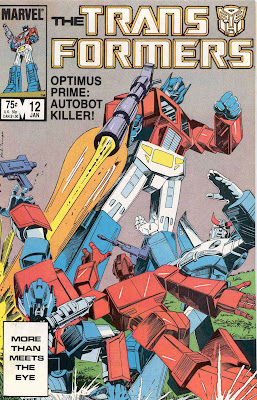 Prime Time! is the twelfth of the US Marvel Transformers comic series. Bob Budiansky continues to write the series. Herb Trimpe again provides the artwork, drew it, with inks by Al Gordon, colors by Nel Yomtov and letters by Janice Chiang. Trimpe also drew the cover.

And it's a pretty kick-ass cover! Optimus Prime stands while Sideswipe, Ironhide and Prowl all fall, felled by his mighty blast! Optimus Prime: Autobot Killer! it declares, and the image is so jarring that I don't mind the redundancy. The non-barcoded version of this issue has dropped the spidey-head, in favor of declaring the issue 'More than Meets the Eye', which is kinda nice. Overall, it's a dynamic cover that draws the reader in, and bonus points for depicting events that actually occur.

Fortunately, the book manages to sustain the level of excellence that the cover promises. It starts out with a splash page of Jetfire flying along, Buster inside. Despite all that's happened, being in control of a super-jet leaves him understandably excited. The second page gets the exposition out of the way, and is somewhat integrated into the story, since his reminiscing causes him to miss out on the Air Force's warning to him. When the human jetfighters engage the massive Transformer, it goes into some preprogrammed evasive maneuvers and shoots them down. Unfortunately for Buster, Shockwave's programming didn't account for human frailty. He blacks out, and Jetfire resumes its original mission; returning him to the Aerospace plant.

Speaking (well, writing) of the plant, Shockwave punishes Rumble for allowing Buster to sneak past him by putting him in charge of guarding the humans. Rumble isn't too worried . . . until Shockwave picks up one of the proto-Decepticon jets and crushes it, declaring that this fate will be Rumble's if even one human escapes. Moving on, Soundwave has found the phone tap, at Shockwave's orders. It seems that Shockwave figured out that there was a bug, given that Bumblebee and Bluestreak had attempted to stop Laserbeak from his mission. This actually doesn't quite track, given that Laserbeak's plan was to watch the the Ark and look for Autobots. One can fanwank that Shockwave ALREADY suspected a bug, but the dialogue doesn't make that clear. In any event, the Decepticon Commander continues to have plans within plans. He has Soundwave stop blocking the bug and plants a false message, that Prime's head is to be dropped into the swamp to slowly corrode. Prowl and the Autobot convoy, already en route, divert to the swamp, unintentionally moving to the spot of their own ambush.

Events rapidly moving to a head, Jetfire returns to base and hands the still unconscious Buster over to Shockwave. No time is wasted in hooking Buster into a pretty nasty looking machine. Jetfire's next mission is to fly out and drop Optimus Prime's head into the swamp. He does so, but the waiting autobots form a robot-chain and pull him out. Since Prime's body has been brought along, the head is able to remotely operate it and reattach itself. All is well . . . or is it?

As Prowl reaches out his hand to welcome Optimus back, He gets unexpectedly shot. Trailbreaker, Windcharger and Cliffjumper are mowed down in short order. Things go to bad to worse when Soundwave, Buzzsaw, Frenzy, Ravage and Laserbeak unexpectedly appear. Though it's not shown, I presume that they were hiding nearby in their tiny alt modes.

In the plant, things have never looked worse. Buster awakens to find that he's strapped down and about to have his skull violated by advanced Cybertronian machinery. Shockwave continues to gloat to Optimus, but an unexpected opportunity presents itself when Jetfire returns. Concentrating, Buster takes command and has the large robot deck Shockwave. The human captives, seeing that there is only one, comparatively small, Decepticon left, intuit that this is their best chance to escape and rush out. Rumble is somewhat paralyzed by his fear, and doesn't move to stop them. Under Buster's orders, Jetfire flies back to the battle with Prime's head. 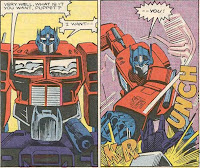 The battle does not go well. Prowl leads the Autobots as best he can, despite his injuries, but the five Decepticons are proving to be too much. Trimpe's art is terrific here, as he gives a near splash page depicting the Autobot's last stand. Yomtov's block coloring puts the focus squarely on poor Prowl, and it really works. But all is not lost! Jetfire, unnoticed, returns the real Prime's head to his body. Even as the Decepticons finalize their victory, Optimus Prime throws his fake head into the swamp and is whole once more. Soundwave doesn't quite realize this right away, and in a nice parallel to the earlier Autobot ambush, the five Decepticons are disposed of in short order. 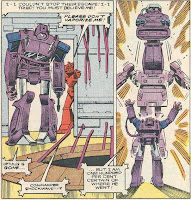 Inside the plant, Shockwave recovers from his unexpected assault. As a cowering Rumble begs for forgiveness, Shockwave lurches into Prime's chamber only to find his captive missing. He immediately deduces where the Autobot Leader has gotten to and blasts his way out of the plant. Tripe does a great job with the body language here, as the ever-logical Shockwave finds all his careful planning going awry. Seeing Optimus Prime standing and the other Decepticons fallen, Shockwave notes that he had never planned to destroy Prime personally, but now finds it irresistibly logical that he should do so. Prime proves his better, though, and hurls him into the swamp. The shrewdly calculating Shockwave points out that his operations continue, and that a hundred new Decepticons might even now be receiving life! Prime opts not to finish Shockwave off, but instead to go to rescue Buster. As it turns out, Buster was already freed. They've both learned from each other, and now the time has come to return the Creation Matrix to Optimus. Prime declares that even one human life knowingly endangered is too much, and prays that the Autobots will take this lesson to heart. 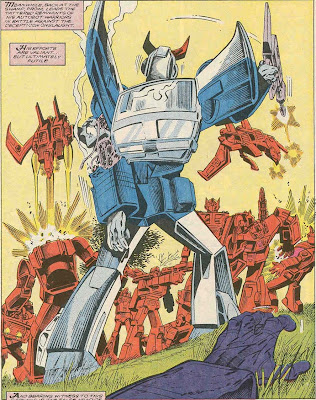 And thus concludes the first major Transformers comic story arc. The Autobots, for the first time really, have achieved a real victory over the Decepticons. The aerospace plant is liberated, Prime is restored, the Decepticons are defeated, and all (or most) is well in the world. This is a very strong issue, presenting a good mix of characterization (Prime and Buster, Rumble and Shockwave all have some nice moments) and action sequences (Shockwave vs Prime, the Decepticon ambush). Trimpe's artwork continues to have a terrific dynamic quality. Prowl's last stand, in particular, is just a brilliant image. Trimpe also uses his panels in unusual ways. Page 13 and page 8 each have Jetfire from top to bottom, emphasizing his size, with other side panels for additional story elements. The excellent artwork and writing combine to make a satisfying conclusion, and helps to make Transformers 1-12 a strong introduction to the Transformers saga.

Next month, we're promised that "The Malevolent MEGATRON returns -- in the weirdest Transformers story yet!". It's a good time to break format, with a new status quo established. Aren't you glad that you don't have to wait a full month?

Great review once again. I love that Prowl panel. I think that the longer the series continued the less the artwork was based on the toys and more on the cartoon models which freed to artist's imagination.

Just a quick note...you misspelled "artwork" at the end of your review

It seems petty to call attention to any faults in this issue, which I have always loved, but this seems the place for me to ask this kind of question:

Why didn't Buster just Matrix-command the Decepticon head-drilling machine (which was presumably not, itself, alive) to back off?

Also, how did Shockwave expect a head-drilling machine to release a computer program from an organic brain?

(These are both questions that could easily HAVE answers, but I do wish the story itself had provided them)

Probably one of the best covers in the series (if not the best), and the interior artwork wasn't that bad either.

Yeah, Trimpe's art really took the whole experience to a new level. The final page seems to be inked by someone else, btw. Based on the linework I'd say Terry Austin helped out on that one :)

I've always wondered if this issue was written to be a possible series ending, in case the comic didn't last past a twelve-issue run. It'd be an acceptable stopping point for the series as a whole, with just some minor dialogue tweaks.