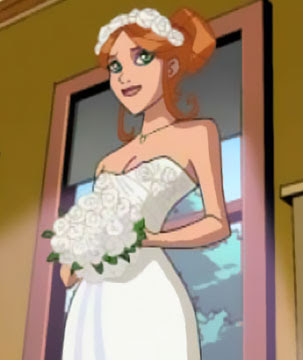 The seventh season finale of TMNT: Back to the Sewers aired this morning, and overall it was a damn fun episode. It's not without flaws, but it's enormous sense of whimsy pulls you along and makes you forget.

With the last few databits of Master Splinter collected, the gang uses their cyber-portal to reassemble Splinter. It's tense, but the procedure is a success! He's glad to be back, and his sons are glad to have him back. But when Donny suggests that Splinter go lie down, Serling has other plans. It's off to the wedding of April and Casey, so into their latest high-tech van/truck/thing they pile. We are treated to an ominous sight, though, a glowing red technological device in Splinter's ear.

The ride over gives us a bit of late-in-the-game character development. Raph drives like a maniac, even though they're heading to country farmhouse of the Jones family. Mikey, though, is enthusiastically looking forward to the ceremony. He LOVES weddings, which prompts Serling to ask if he's ever actually been to one. 'No,' he replies, 'but he watches a lot of TV, and every show eventually does a wedding episode.' It's a nice tongue-in-cheek moment of the writers (Matthew Drdek and Robert David) acknowledging that yes, this is a bit of a cliche, but not to worry, they're aware of it.

Casey and April are glad to see them, especially Master Splinter. Things get nervous when there's a knock on the door, as the guests aren't set to arrive until tomorrow . . . though, Casey does admit that in calligraphy all those letters and numbers kinda get mixed up. No worries, though, it's just Casey's mom. And so begins the real fun of the episode, the cavalcade of guest stars. Cousin Sid is next, followed by The Ancient One. There are a few brief moments of revelry as guests continue to arrive, but the audience sees Khan with a fleet of trucks parked nearby and knows that danger is coming.

The day of the wedding! Raphael is fulfilling his duties as best man, attempting (rather unsuccessfully) to tie Casey's bow tie. Michelangelo is oddly more helpful to April as a maid-of-honor stand-in. Casey is all nervous energy, but April is the picture of radiant joy. Veronica Taylor and Marc Thompson both turn in great performances, and Adrian Barrios' wedding designs are just gorgeous.

Our gang of heroes waits in the Jones barn, swollen to ridiculously large portions by people such as the Ninja Tribunal and acolytes, Usagi Yojimbo, The Professor on the piano (from the episode The Garbageman), Angel (the teenage girl from The Darkness Within), Leatherhead, Gennosuke, a whole bunch of Ultroms in tuxedo-clad robot suits, Ultrom captain Mortu in a futuristic walker, Doctor Chaplin and a kimono-clad Karai, and more, with Professor Honeycutt (aka the fugitoid) officiating. Splinter stumbles upon the enormous Foot camp, and is soon tossed into the barn along with some gas grenades. Who should stride in but the reconstituted Cyber-Shredder!

A Battle Royale commences! This is when you have to kind of tilt your head and squint a bit. The Ninja Tribunal, for instance, should be nearly on the power level of the Demon-Shredder. The Ancient One is no slouch either, and Karai has consistently been shown to have a skill level comparable to Leonardo himself. Really, Karai's relationship to the rebuilt Foot clan could be an episode all to itself. All told, this was probably the worst possible time the Shredder could have planned his attack. To be honest, though, I found myself not really caring about all of that. Mostly the focus was on the turtles vs Shredder, and April and Casey vs Khan.

The Shredder proves nearly impossible to beat, and collapses the barn on most of the guests. The heavy hitters prop up the debris long enough for everyone else to run outside, but they find themselves surrounded by legions of Foot soldiers. Not to fear, the Justice Force is here! They give the guests a needed boost to fight off the Foot. Meanwhile, Shredder inadvertently reveals that he has a data core, which allowed him to survive and rebuild himself following his defeat in City Under Siege. Dontello uses this information, along with the electronic bug planted as code among Splinter's databits, to develop a decompiler program that should work on him. Shredder throws up a force field to prevent his decompiling, but it doesn't keep out flesh and blood. Splinter engages the Shredder in single combat and disables the shield, allowing Don and Serling (in attack mode) to decompile the Shredder . . . once and for all? Casey, meanwhile, has finally figured out his bowtie - it's binding Khan's hands behind his back.

The bad guys routed, the wedding commences, though outdoors now. EVEN MORE guest stars cameo here. Though not among the wedding guests, The Rat King (from Bishop's Gambit) watches, hidden, from the trees. From the Battle Nexus, the Daimyo and the child version of The Ultimate Ninja watch on a screen. Agent Bishop, in an undisclosed location, also watches, his smile containing no hint of malice. Codey, too, is watching this joyous event through a time portal. Renet, apprentice to Lord Simultaneous, doesn't need a portal, and watches from the treeline for the umpteenth time. No matter how many times she sees it, it always makes her cry. And so, Honeycutt pronounces Casey and April man and wife. They share a kiss as the audience cheers, the sun low in the sky. It's a rather beautiful moment to end the season, perhaps the series, on.

So much works about this as a possible series finale. The Turtles have been to many different locales, dimensions, planets, even eras. Along the way they've made dangerous enemies but more importantly, valuable allies. The fifth season finale worked well because the threat was so huge that only the combined good and evil forces of the major 21st century forces could stand up to it. (The Ninja Tribunal, Turtles and Justice Force on the side of good, with the forces of Agent Bishop/Baxter Stockman, The Foot Clan and the Purple Dragons on the side of evil). This season explores a similar idea, but just lets us see many of the allies. The Justice Force has already become a depot for the super-powered 21st century allies, like Nobody and Nano, but this episode takes the concept to the next level. Whether the allies are merely friendly humans, like The Professor or Angel, or trans-time/dimensional forces like Renet or the Daimyo, or even aliens like Honeycutt and the Ultroms, they show up. It's a nice reminder of how much the series has accomplished, how much our gang has accomplished. The choice to focus on the human allies is slightly odd, shifting the focus a bit away from the brothers, but gives an extra emotional weight to the episode.

I've been a big fan of this new series - the designs, the writing, the characters. Season seven isn't quite the high point that season 5 was, but it works a lot better than season six. I would have liked to see more Stockman, and episodes focusing on Bishop and Karai, my three favorite villains. I certainly hope there is a season eight at some point, but if there isn't then we've had a pretty good ride, and this episode serves as a nice capstone. We've come a long way from Things Change, the series premier. Over 150 episodes later, and a whole universe has been created and explored. Kudos to all involved!

3/1/09 EDIT: BTW, if you're a fan of character models (and I think that, if you're reading this blog, there is a decent chance that you are), then you might be interested to see the character models from this episode on the Fox Kids blog.
Posted by Jimtron at 12:13 PM

It was a fun ep; I do wish that the guests who could fight were able to stand their ground more, as they looked ridiculously underpowered when the Justice Force showed up.

I also kind of wish Hun had shown up, like as a truce, albeit probably a temporary one.

Still, a nice end, if indeed that is what this is.