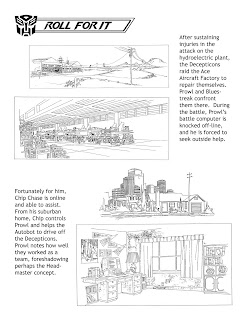 You know, it's odd. As much as I love Prowl, I've got very little material that features him. The closest I have is some designs from Roll For It, the aircraft factory where Prowl's battle computer gets damaged, forcing him to link up through the phone lines with Chip Chase. The same Chip Chase who was in possession of the anti-matter formula that Megatron was trying to steal. (Oh, coincidences abound in Roll For It.)

I like Chip's room. He sure does like . . . colleges, doesn't he? Also, is that a unicorn bookend on his desk? Oy! It's hard to imagine why they never wrote in a love interest for this bad boy.

While I have no illusions that Headmasters were in the works this early in the game, I do like the idea of an Autobot/human partnership being highly effective. It's a tiny bit of serendipity that helps the story be greater than the sum of its parts. Incidentally, the Chip/Prowl relationship would later be picked up on for the Binaltech line. When Prowl's laser core, which some fans theorize is an early form of spark chamber, is lost during the BT upgrade process, Chip Chase transfers his life essence into the incomplete Prowl body to create Prowl II. The new body had two separate computer systems, one dedicated to each different ego.

Oddly, I've got a whole 'nother couple or three pages on Roll For It, which explains why I sort of start speaking about it in the middle of the episode. These pages weren't quite finished when I realized we just wouldn't have the room for them, so don't be too harsh.

This is so cool! I had no idea so many of the locations in the show had their own animation models. I just sort of assumed the animators were making up stuff like that as they went along, maybe with occasional direction from the script.

No, virtually everything that shows up on screen has a model. Now, a lot of them are missing, but they did exist at one point. I have tracked down a ton over the years, but I know that there are many more that I'm missing.

One of the nice things about working with Cartoon Network on The AllSpark Almanac is that I've literally got every model that went into the creation of the show at my disposal. Now, a lot of them just aren't that interesting, but all of the ones of note are making it into the book. It's an amazing experience, much different than the compilation of the two Ark books.

From what I read, they (the artists) researched specific geography in the states for the look of the background, but from what I understand nobody has said exactly where. Thats something I'd be interested to know.