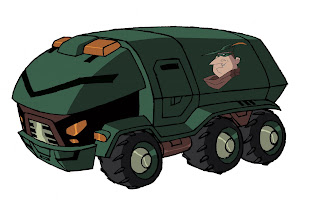 I've been lucky enough with The AllSpark Almanac to get some help. Marty Isenberg and Derrick Wyatt have been invaluable in making sure that the information in the book is as accurate and true to their vision as possible. My friends Harrison and Bish have been lending their proofreading eyes, trying to make sure that what we submit to our editors is as error-free as possible. And of course, I couldn't do it at all without Bill, my coauthor who's Birthday just happens to be today.

Which brings us to The Arrival #4. It's a great little story, written by Marty Isenberg, drawn by Dario Brizuela. In it, Porter C. Powell (one of my favorite animated characters) takes advantage of the fact that he owns the rights to the S.W.A.T. assault vehicle that Bulkhead is based on to mass-market them to the public, capitalizing on the popularity of the Autobots. Naturally, Bulkhead isn't too pleased with that. 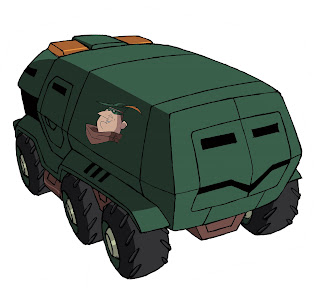 In the course of the story, we get to see well over a dozen differently colored Bulkheads. Javier went ahead and made up models for a few of them, for use on the page of the book for this issue. Unfortunately (or fortunately, depending on your perspective), he made SO many that I was left with a dilemma. Include them all, but smaller than I felt they warranted, or include just a few and leave some out. (I suppose there was a third option, give it another page in the book, but my pagecount is already tight.) I opted to include my favorite models at a large size. That meant that The Angry Archer's Bulkhead was snipped, since compared to many of the others it's kinda plain. Since it's extremely unlikely that I'd include it in a follow-up volume, I thought I'd post it here. As usual, I hope you enjoy it.
Posted by Jimtron at 9:21 AM

Javier's a talented guy, nice to see him on this book!

This is awesome! I love seeing multiple views of vehicle modes (in addition to the bot modes). I hope in the AA that we get to see all the vehicles in similar glory to this post. Fantabulous!

Hey, if you've got them, I'd love to have them. I guess I assumed that you were working directly on the page. I absolutely love the various bulkheads from this issue.

You put up the Angry Archer Bulkhead model, I put up this:

I'm off my rocker and I think a couple Elizabethan/Shakespeare scholars are ready to strangle me. << >>

lonegamer78, you are a mad genius!

You should see some of what my fellow News/Content members and I came up with:

Can't wait to read the Almanac and hoping for a volume 2! :)

Cool to see that comic book material will be in the mix too. Kinda shows how the whole Animated universe is all in-continuity.

I'm really hoping for black and white lineart and concept art too.

Also, I just placed preorders for this and the Complete Ark at amazon.ca and saw the ship date was in September, lol!

crap i only just found your page again, i must remember to bookmark it next time doooooh >_<