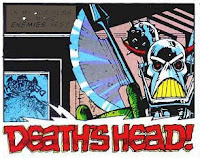 This is how Death’s Head’s story began: a one-page, nine-panel strip created to ensure the character was owned by Marvel before he started hunting down Hasbro’s products in Transformers UK 113. Simon Furman was the writer and Brian Hitch the artist (I’ve not been able to confirm who the other creatives were)
We start with a head-and-shoulders shot of Death’s Head, apparently staring out of his office window. Behind him, a Stetson-wearing silhouette outside the door shouts his name. His response comes in the narrative caption, “In my business you make enemies, yes?”
True enough, the door is kicked off its hinges by Tex, a mechanoid-cowboy who is seeking vengeance on this ‘low-down, stinkin’ bounty hunter’. Keeping his back turned, Death’s Head coolly informs us that he had completed a contract to kill Tex’s brother, massacre his livestock and burn his farm.
As the cowboy advances, fingers twitching over his holster, Death’s Head’s captions express surprise that Tex had taken such a straightforward piece of business personally. He believes that, unlike himself, Tex has no sense of humour.

“High Noon, Tex!” The only dialogue in this story accompanies the reveal: the ‘Death’s Head’ at the window is a facsimile. The words were spoken via radio and the shield on his back has flipped open to reveal a hollow space packed with explosives.
Outside the building, a gauntleted hand presses a remote control, detonating the entire floor of the building. Unharmed, the real Death’s Head catches a falling Stetson. He considers that, before triggering the explosives, he gave Tex a moment to realise he had been duped. Tex didn’t take this opportunity to laugh. Tossing the hat aside, Death’s Head concluding that he was right: Tex had no sense of humour.
A nice little story, playing with the Western stereotype of duelling gunfighters (Furman says the inspiration for a bounty hunter came from the Spaghetti Western genre). A bit of action, a bit of comedy; pretty much the same mix that continued throughout most of his stories.
According to Furman, he intended to create a throwaway character for the ‘Wanted: Galavatron - Dead or Alive” story, but was inspired by Senior’s artwork to re-write the character into something that had breakout potential. So although ‘High Noon Tex’ was officially published first, the style had already been established in issue 113.
Even so, it’s nice to see so many of Death’s Head’s characteristics set down on his first appearance. The most obvious is the raised inflexion: ’ yes?’, giving us an immediately recognisable speech pattern that can be used as a joke, a threat or a cliffhanger.
His use of trickery over brute force is another (as Bishbot pointed out in an earlier review, Death’s Head often wins by surprise and canny tactics – an ambush predator more than a juggernaut).
Finally there is the sense that he is addressing us, the reader, in the caption narrative. Skirting the fourth wall, without actually breaking it, was something else Death’s Head would do from time to time. It’s a nice method of making us complicit in the anti-hero’s activities, so we can’t really condemn his mercenary, violent actions.
The sardonic, detached manner in which Death's Head seems to view the world is interesting. Could he really not understand why Tex didn’t find all this funny, or was he just mocking him further? This emotional detachment can have nothing to do with Death’s Head being a robot, since the wrathful Tex is clearly mechanical, and plenty of the Transformers expressed emotion. I think this business-like neutrality – never taking sides, loyal only to his contract – gives him a nice versatility. He doesn’t have to be good or bad, just successful. 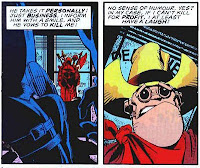 Brian Hitch (later of The Ultimates) did good work with the art: there is a good energy in the door kicked open and a nice sense of tension for the interior panels. The shadows – like those cast by the Venetian blinds and Death’s Head’s name on the window – add a lot to the mood. In fact, take away the levity of the script, and the artwork makes it look like a much darker tale.
(That said, there are a couple of nice visual jokes: a little alarm clock among the sticks of dynamite, the ‘Marvel Comics’ sign on the exploding offices.)
The rendering of Death’s Head himself is very good (although the head looks a little small in proportion to the body in the final frame). The character model created by Geoff Senior is as strong as the writing: a chrome robot wearing battered combat armour, carrying a range of guns and melee weapons. Ragged red cape and bullet wounds, he already looks like he’s been in some tough scraps. His skull-like head, with both tusks and horns, makes a memorable silhouette (and a good thing too since, technically, only his eyebrows can move to express emotion – quite a challenge for an artist).
Anyway that’s about enough for a one-page story (I promise I won’t dissect every page in quite so much detail). We’ve been introduced to the character and next week, Death’s Head bounces out of the Transformers universe and collides head-on with … Doctor Who!
‘High Noon Tex’ was republished in ‘Death’s Head Volume 1’
Posted by Chuffer at 9:50 AM

Great review, Chuffer, and welcome to the team. Thanks for a thoughtful, insightful analysis. I look forward to seeing you tackle the rest of his appearances.

I concur with Jim. Great to have another contributor, and what a good subject!

I always loved Hitch's interpretation of Death's Head. Senior might have created him, but Hitch just brought him to life for me.

I can't wait to read your views on some of his other adventures. Especially the Dr Who stuff.

Thanks for the welcome guys. This is a great blog, and I'm looking forward to contributing.

Death's Head is a great character. I'd really enjoy a collected edition of them one of these days..

Yes, a great, extensive analysis of a one-page story that really deserves such.

As for Death's Head's design: was the backpack arsenal of that green guy with the eye beams that Optimus killed for beating up Outback when he returned to Cybertron a test design of Death's Head's pack of wrist-weapons? And his ability to replace his hand with them is reminiscent of Baron Karza from Micronauts; has Furman or Senior ever said if that guy provided a bit of inspiration? Regardless, I've always thought that the good baron would be a good place to start if doing a custom figure of DH, along with a Marvel Legends Doctor Doom figure (a parallel touched on when he meets the FF).

I've read a bit of Furman's thoughts on creating Death's Head's personality, but not much on hid design and all the changes he went through, so I hope you have a little insight there. Regardless, your reviews promise to be well worth reading!

the replaceable hands thing I actually thought was taken from the trail breaker/hoist toy. Though who knows, simon Furman probably.