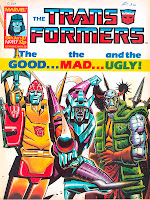 1 was written by Simon Furman, pencilled by Will Simpson, inked by Tim Perkins, coloured by Steve White and lettered by Richard Starkings.

Geoff Senior provided the cover and while I'm usually not a fan of the attempts at humour on these images I don't mind so much on this one, mostly because Death's Head seems to carry a kind of western air around with him, maybe due to his rights-securing one page story High Noon Tex. The three images are well drawn and the colouring work by John Burns really raises the bar. Senior's work looks great with flatter colours for internal panels, but when someone puts the extra effort in for a cover, it really shows.

Death's Head has made it all the way to the Decepticons' tropical island base. He has determined that Soundwave will probably have the answers he seeks (having access to historical records about the time you've travelled to is QUITE the advantage) and wastes no time in stalking and attacking him.

I love the title splash page, more for Death's Head than for Soundwave, who is merely adequate, but look at the way Death's Head's cape billows out dramatically. It's a great image - Will Simpson pulls out a great panel here.

He interrogates Soundwave mid-battle, but the Decepticon is confused by the questions, until he reads Death's Head's mind and realises he too is from the future. He redoubles his efforts to stop Death's Head, saying he doesn't want "space scum" neutralising Galvatron, even though the 1987 Decepticons do want him stopped. I think this is a little out of character for Soundwave, who is usually fairly calculating. It surprises me that he doesn't think letting Death's Head h

aving a crack at Galvatron is a good idea. They have nothing to lose, after all.

Soundwave deploys Laserbeak, who distracts the bounty hunter momentarily before he is able to replace his arm with a cluster-rocket that takes the little flying Decepticon right out. Death's Head, always sensitive about other people's opinion of him, is feeling a little wounded by the "space scum" comment and begins to interrogate the defeated Soundwave rather roughly...

Back in the forest, Rodimus Prime is explaining the current situation to Cindy while observing Galvatron's volcano base. She is torn up with guilt about accidently leading Galvatron to Ultra Magnus and is frustrated that the Autobots don't seem to be doing anything.

Rodimus agrees it's time they acted, but not before having a page long brood whereby he remembers recent events for the benefits of unfortunate people coming into the middle of this storyline.

At the volcano's crater, Galvatron is still ranting to Ultra Magnus about how he's going to absorb the energy of the volcano and become all powerful. The Autobot tries one last punch but is painfully slow and Galvatron puts him down, hard. 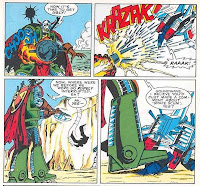 As the Autobots charge the crater (this is apparently what Rodimus's careful watching and planning has resulted in - a headlong, uphill charge) Galvatron hoists Magnus over his head and hurls him down the slope, knocking over Kup abd Blurr like ninepins.

Apparently this is enough to knock them out, leaving Rodimus and Galvatron, about to face each other in a one-on-one struggle to the finish...

... For a moment, before Death's Head turns up, brandishing an enormous blaster and demanding the bounty on Galvatron's head. An exciting cliffhanger!

Furman has picked a smart time to reintroduce Death's Head. He's a great character, but he's better when you don't expect him, and after two issues centred around the volcano it's great to see him in a completely different location. I like that Soundwave puts up a decent fight. You don't often see him as a full-on warrior, and it is better that Death's Head wins through being a canny fighter rather than just having him set to God mode. We already have Galvatron in that role - two utterly indestructable future mechanoids would leave the regular characters somewhat sidelined. Death's Head is a threat because he is clever and dangerous - not because he is is unstoppable.

As human characters go, Cindy is pretty good. I don't really find it that believable 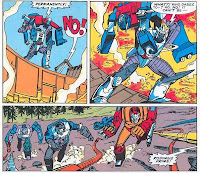 that she has accepted the Transformers for what they are so quickly, but that seems to be the default setting for humans in this continuity, so it works within the wider context of the other humans we have seen.

We don't really learn anything new about Galvatron or Ultra Magnus but the Autobot continues to be convincing in the hero role. Rodimus is mostly there to provide exposition, unfortunately, but his grim resolve resonates very well - shame about Kup and Blurr going down so easily though - they'll be back.

Will Simpson turned in a good issue. He seems to cleave much closer to the toy designs in these issues and generally does pretty good work - as mentioned above, his Death's Head is very nice and the Transformers, especially Ultra Magnus, are all servicable to good. He needs to stop adding distracting little star shapes to indicate gleaming metal though. It doesn't really work, although it is an interesting contrast to many of today's Transformers artists, who often try to make them look as tarnished and cracked as possible.

The stage is set for a three-way clash atop an active volcano. What could possibly be more exciting?
Posted by Bishbot at 11:15 AM

As human characters go, Cindy is pretty good. I don't really find it that believable that she has accepted the Transformers for what they are so quickly, but that seems to be the default setting for humans in this continuity, so it works within the wider context of the other humans we have seen.

I found this comment a little odd. While there are a lot of "sympathetic humans" in the comic (or were you thinking UK-specific continuity?), my main point of comparison is the cartoon. In that context, it seems to me that the cartoon was where all humans just readily accepted the existence of giant robots (especially as friendly allies) way too easily. In the comic, we have the likes of RAAT. Humans, as a rule, tend not to think well of the Transformers (or even the Autobots).

Sure, there are Cindys out there, but this just strikes me as an odd comment.

To me it's not really a question of thinking well or poorly of the Transformers, it's even being able to comprehend their existence without freaking out that's the surprising part. And yes, the cartoon also had this in common.

have to agree, 99.9% of people in the "real world" would not simply accept any giant alien robot as an ally or friend instantly. The whole premiss is faulty.