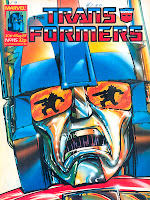 as by Lee Sullivan and works quite well. I certainly like the idea of Galvatron being reflected in Magnus' shocked optics but something doesn't quite work for me. I find it a little hyper-dramatic, as though this would have worked better as an internal splash than it does as a cover. Maybe I just prefer prettier cover art. Either way this was a weekly book and variety must have been difficult to maintain so I think Sullivan deserves praise for trying, and for telling a story while doing so.

We pick up from the ending of Resurrection Part 2 by joining Ultra Magnus as he looks for the Ark. He is not over-exerting himself, as he is very much enjoying wandering Earth's tranquil forests and resting under the stars.
He is shaken from his reverie by a massive explosion that jolts him off his feet and is just picking himself up when he hears a human crying for help from over a kilometre away. Rushing to assist he finds a camper van toppled onto its side. There are two women struggling to get a third from the wreck before it explodes!

Ultra Magnus lends his strength to assist and manages to rescue the trapped woman even as the vehicle detonates. Magnus transforms and gives the women a ride in his cab, explaining all the while about being an Autobot from Cybertron and his part in the war (note how all the Transformers in the Marvel comics are quite free with this information - "robots in disguise" indeed...). The women (Cindy, Judy and Corinne) explain that they are on a trip to see the volcano that is nearby, which, in a nice bit of continuity, causes Ultra Magnus to freeze up briefly at the mention of the word. Volcano was the codename for the Operation where Impactor was killed back during Target: 2006.
Ultra Magnus' wish to know what the future holds for him echoes ironically when we cut to the year 2007 and find that era's Ultra Magnus counselling Rodimus not to jump to Earth's past in pursuit of Death's Head and Galvatron. I'm not sure the drama in this segment really makes sense. Magnus' problem is that they need Rodimus to lead the Autobots against Shockwave's Decepticons, which may well be true, but this is TIME travel, he can pop to the past and come back seconds later (or earlier, but that WOULD be complicated). Of course there is always the danger that he could be destroyed, or lose the ability to time jump (although, come to think of it, that one wouldn't matter either) but Magnus doesn't seem concerned about those possibilities, merely the time factor. This dilemma worked in Target: 2006 because Ultra Magnus was on Earth at the same point in time he had been on Cybertron, but the normal temporal rules shouldn't apply here. Time travel has always been shown to be fairly precise in the book so far, and even if Rodimus gets it wrong once, why not try again?

Rodimus disagrees with Magnus on the grounds that Galvatron is his responsibility (and possibly because he knows how time travel works) and takes Kup and Blurr with him into the past, with Wreck-G

Back in 1987 Ultra Magnus and his female companions are stopped in their tracks towards the volcano by an enormous forest fire. Cindy suggests he knock down trees to create a firebreak and he happily obliges. As Magnus goes about this task he discovers something strange about the fire. It rings the volcano, despite there having been no recent eruptions, and it seems to be acting as a barrier.

His reasoning is interrupted as Cindy runs up to him babbling about encountering someone she thought was his friend, until she saw the different badge. Ultra Magnus barely has time to ask "Who?" before the mighty robot leaps dramatically through the flames and announces "Me! Galvatron!"

This storyline is turning into quite a slow burn but I don't think there's anything wrong with that. I have always felt that Ultra Magnus is a character with a lot of potential and I like seeing his contented reactions to 1987 Earth, although he does know that there is a war going on here as well, so arguably he should hurry himself up a bit.

The three humans aren't especially interesting yet but do go a long way to tie the drama into our planet, which is important, otherwise these battles could be happening anywhere. I have already outlined my problems with the badly-manufactured drama of the future segments but I really do love seeing the future version of Ultra Magnus. Some might argue that knowing he survives until the future kills the tension but, really, drama is not about who lives or dies, but about how we get where we're going, and clearly Ultra Magnus is going to go through a lot. And that is disregarding the notion that the future can be changed, which is surely possible otherwise future Magnus would know that everything will be fine with Rodimus' mission.

Oh the art front this issue sees the debut of Dan Reed with his famous "wobbly" Transformers. I think that for this issue at least he is only partly successful. I approve of different art styles being used to depict our favourite characters and I think Reed's sort of semi-organic approach is certainly a valid one but oddly enough it is some of the posing and staging I find a little off here, which you would think would be the strongest point of giving them humanlike characteristics. Panels like the splash of Magnus being jolted by the explosion are very awkward indeed, although I do like the exaggerated sense of height he gets in panels that include Cindy, to properly show off the size difference.

A solid issue with a great ending, slightly marred by logical inconsistencies and occasionaly subpar art but in general an enjoyable (and essential) installment in the "Galvatron's back!" storyline. What's happening at the volcano? And whither Death's Head? Find out next issue! (except for that second question, because he's not in that one either).
Posted by Bishbot at 6:44 AM

Time travel rules seem to vary across fiction but some of the ones that seem to be followed here are:

a) The time trip fixes the duration in both time zones - i.e. if you spend a week in the past you return a week after you left.

b) You can't travel back further times to keep trying again.

It keeps things simple (and on screen it's a useful budget friendly restraint against writers) but it doesn't always get so clearly explained. Looking back it's clear that the rules of time travel in the TF universe weren't always explained very well (unless there was something on the intro or letters pages that haven't been reprinted) - there's also no clear explanation as to why the 2007 Ultra Magnus has no memory of Galvatron being about in 1987.

My favourite part about this issue is the idea that Galvatron appears to have hidden his true nature in order to charm information out of a human (hence Cindy thinking he was a friend of Magnus, with an expression that clearly wasn't evil to start with). It shows a sinister, calculating side that we saw less and less in the book as Galvatron sunk deeper into his beserker-like rampages.

It's a shame we couldn't have seen this encounter between Cindy and this 'friendly' robot (placed off-panel perhaps, so we only see a leg, or silhouette) – it's the kind of misdirection that Furman does well (as well as being a device that works best in the medium of comics).

The nit picking for the time travel in Fallen Angel seems to be mirrored in this review. I'm of the opinion that the technology Rodimus and Galvatron have access to had a limit to how far back it could go, hence for every day Galvatron is in the past, it's a day later in the future too. Therefore UM is quite correct when he says it's too dangerous for Rodimus to lead the mission, because there is a very real chance he could be away a very long time.
As for UM being alive in the future therefore we know he lives - do we? isn't there room for a paradox in which the 1987 UM dies as a consequence of Galvatron being out of time? Isn't that really where the true drama here is? Can RM and his team prevent time from being altered by capturing Death's head and Galvatron?

I agree with everybody that the time travel stuff was always vague. The idea that one robot had to be displaced when another time travelled started out as a gimmick to "kill" Optimus Prime. Furman always kept Prime and Galvatron apart (presumably to avoid the Worf Effect - http://tvtropes.org/pmwiki/pmwiki.php/Main/TheWorfEffect - Magnus suffered from this instead).

Answering Tim above, 2007 Ultra Magnus would have no memory of Galvatron in 1987 because surely Galvatron's time travel was changing the past?

I didn't know "you can't travel back further times to keep trying again" had become a kind of accepted rule (I don't read much sci fi stuff besides transformers!) but as a dramatic device it's a very good idea (because it makes it "do or die" for the time traveller). I take it other comics/films etc make this clear? Transformers never did, and Back to the Future never did, but hey.

Unlike Back to the Future and Bill & Ted, the time-travel logic in the UK TF comic didn't really stand up to scrutiny.

In Target: 2006, Galvatron concluded he was in a parallel universe when he apparently killed Starscream, but for some reason didn't come to that conclusion earlier when he was shocked to learn that Megatron had teamed up with the Autobots (something he should have remembered from his time as Megatron).

In Time Wars, Galvatron somehow had memories (from his time as Megatron) of Galvatron killing Optimus Prime and all his Autobots in 1989... but that would be impossible if he also had memories of Optimus Prime defeating him in 2005. And in any case, the Megatron witnessing the events of Time Wars wasn't the real Megatron, but a Straxus clone who would die a few months later.

No, it's best not to think about the rules of causality, but just enjoy all the explosions and stuff. :)

Galvatron was changing the past when he arrived there. He changed it by putting a huge death machine in there, he also changed it by making Megatron and the autbobots gang up.

Yeah, that's fair enough - but it was weird then that Galvatron went on believing it was his own past, and that he could remember some of it (such as the Time Wars) from his time as Megatron. And that only odd things like Starscream's apparent death in T:2006 made him temporarily think it was not his own past, but a parallel universe, while he took all the other changes in his stride.

And even after all the apparent changes had been made to the past, Autobots and Decepticons could still travel back to it from 2009 as if it was the past of their own universe.

It really is a bit of a mess in terms of story logic.

To keep my own head straight, I prefer to think that the time storm was caused solely by Cyclonus and Scourge avoiding the mass-displacement method of time-travel, and that the normal time-travel method prevents time-travellers from remembering anything from history about time-travel, regardless of whether they witnessed it or read about it first time round. That leaves it open as to whether it's really the same timeline or not.

And then I get back to enjoying the explosions.