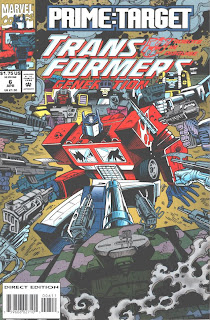 The sixth issue of the US G2 Marvel Comics run of Transformers contains two stories; Tales of Earth, part three, and The Gathering Darkness.  Both were penned by Simon Furman.  Tales of Earth was drawn by Derek Yaniger, while The Gathering Darkness was penciled by Manny Galan and inked by Jim Amash.  Both were colored by Sarah Mossoff, lettered by Richard Starkings with Gaushell, and edited by Rob Tokar and Tom DeFalco.  Nothing clever in their titles this time out, perhaps because the dense titleblock of Tales of Earth came first this time out.  Cover, as always, is by Derek Yaniger.

The cover is competent.  Optimus Prime is completely surrounded by Decepticons, with a nice variety of guns pointed at him from all angles.  "Prime:Target" it says, which is a little bit clever, I guess.  It certainly conveys the idea that Optimus is in trouble pretty well, but something about it doesn't quite work for me.  Maybe it's Prime's face, which is a little too blank somehow.  Maybe it's the composition of the image, which is pretty darned busy.  Regardless, not one of my more well-loved covers from this run.

Fortunately, the issue itself is a strong offering, the best we've had since the powerhouse that was issue #1.  We open on Tales of Earth, part three.  Megatron tours the Warworld, and despite himself he is impressed.  In fact, he almost regrets the finality with which he removed Bludgeon from the picture... almost.  Given Bludgeon's obvious alacrity as Decepticon leader, Megatron is perplexed as to the purpose of the seemingly random attack on Earth, but when the nervous Swindle shows him an army of not-yet-living Decepticon warriors, Megatron gets it immediately.  I like Furman's characterization of Swindle here, the first real bit of personality my favorite Combaticon has demonstrated in this universe.

Down below, Starscream, Thundercracker, and Ramjet battle the American military for a 'strategically unimportant bit of land,' AKA the White House. (Lovely lettering/art integration again, one of the techniques of this book that I really enjoyed.)  Ramjet can't help but wonder why Starscream was the 'bot Megatron reanimated.  Back on the Warworld,

Soundwave obsequiously asks the same question as Rumble and Frenzy attempt to keep Darkwing alive on heavy life support.  (Nice continuity there from last issue, and it'll pay off next issue.) Megatron concedes the point.  (Though, really, who else was Megatron going to revive?  Shockwave?  Galvatron?  I think Megatron chose the lesser of two evils here.) While Starscream was necessary when Megatron was all alone, he's outlived his usefulness.  Megatron fully intends to give Starscream 'a well deserved rest' after his new army is up and running.  Shrewd, though one wonders if Megatron is waiting a bit too long to pull the trigger on this one.  (Spoiler alert: he is.)

Thus ends Tales of Earth, part three, a most interesting prologue to the story about to come.  It's mostly set-up, but what action there is has really quite nice artwork, which helps.  Besides, it IS only five pages, and it flows so smoothly into the next tale that one hardly notices how little actually happens. 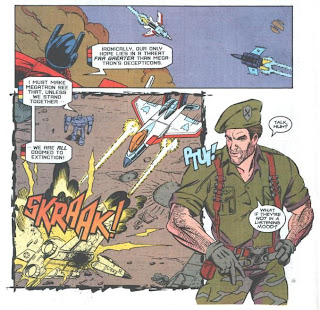 Speaking of the next tale, The Gathering Darkness.We open on the good folks of G.I. Joe, who has been given the unenviable task of salvaging the U.S. Army's efforts to resist the Decepticons.  General Hawk has pinned his hopes on an Autobot counter-attack.  He's disappointed to find that Skydive has only been able to rustle up one Autobot. Hawk is, understandably, furious.  Optimus tries to explain that a full-scale war would do even more harm to the Earth than the wanton destruction visited upon her by the Decepticons.  What alternative, then, asks Hawk.  Even surrender doesn't seem a viable option, given the lack of demands on the part of the Decepticons.  Prime tells them the truth, that there is a greater threat out there than Megatron's Decepticons, and that the plan is to convince Megatron to stand with the Autobots.  Flint spits on that plan, as well he should.  It seems to me that Optimus is more-or-less selling out the human race to get a chance to ally with Megatron.  While that's an interesting emotional direction to take the story, the true ramifications of it never seem to be explored.  This is also the last we'll see of G.I. Joe in the pages of this book.  I'm glad we got one last look at them, though.  It makes sense that they'd be one of the few groups on Earth with a ghost of a prayer against the Decepticons.  I suppose that the Neo-Knights should probably have made a stand somewhere, but then this really isn't their book.  The Joes, at least, have been introduced already, back in issue #2.

Did'ja notice Starscream flying overhead during Optimus' conversation with Flint and Hawk?  Nice set-up there, when Starscream reports to Megatron that their target has arrived.  Love the pannel of Megatron's mouth here; it seems very Frank Miller to me.  Megatron gets ready to confront his nemesis.  Grimlock, too, gets ready for a confrontation.  He thinks Prime's plan of going to Earth alone is sheer lunacy, and wants to gather a strike force to back Prime up.  Prowl, though, argues against it.  Grimlock is left with a choice...  Really, though, is there any doubt what he's going to do?

Back on Earth, the conflict heats up.  Tantrum (remember him?  Predacon, got a bit of facetime with his teammates back around issues 25-50?)  runs around, destroying houses that seem out of scale with him gleefully... until Optimus Prime blasts him, then runs him over.  (I think it's funny, but the little radar dish module arm on the platform that comes with Prime's trailer is sticking up from the roof of Prime's trailer.  Yes, the toy can do that, but it's kinda funny to see it done in artwork.)  Optimus demands that the chaos end now, declaring that it's time to talk.  This seems somewhat hypocritical to me, as he stands amidst the wreckage of one of Megatron's soldiers.

Perhaps Megatron thinks so too.  He blasts Optimus in the back, setting the tone for their fight.  Megatron brutally savages Optimus, ignoring the Autobot's pleas for alliance.  Before long, Optimus' chest is ripped open, and the Matrix energy siphoned from him.  As Megatron prepares the coup d'etat, he's interrupted by the arrival of a squad of Autobots.   The battle rages for a bit, but Megatron knows a losing fight when he sees one.  With his objective secured, he has the drop ship retrieve him.  Prowl (why did he even come along?) frets that this must truly be their darkest hour, but his maimed leader isn't so sure.  Optimus has a sense that Jhiaxus will be on the receiving end of Megatron's new army.

It was an exciting fight, over quickly but for all of that possessing a jagged energy.  I love Megatron ripping off Prime's torsoplate.  I find it a bit odd that the Matrix is seemingly back to being just energy again.  I suppose that the vessel that we'd seen in the Matrix Quest storyline was destroyed along with Unicron, and whatever energy Optimus has was put back there by The Last Autobot.  I also like Megatron's almost gentle last words to Optimus... "Hush.  Darkness gathers... "  It seems very fitting, though of course it's not yet Optimus' time. 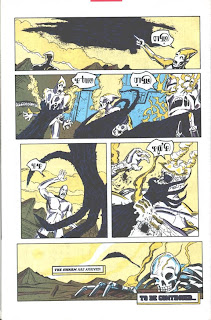 The book's not quite over yet, though.  A race of mechs, nomadic clones, is gathering solar energy on a world without clouds or night.  They will be the first victims, at least that we learn of, of the swarm that was introduced last issue.  It's legitimately terrifying; a black mass in the sky, reaching down and absorbing them in seconds.  Now I'm starting to get why Optimus had such a bad feeling, even above and beyond the threat posed by the Cybertronian Empire of Jhiaxus.  Oh, and I absolutely love the almost musical script that represents the Esk speech.

Finally we're getting to some real a-list material.  This time out, the two-act structure to the story really works.  Optimus and Megatron have a very satisfying fight, really the first they've had since, what, issue 4 of the G1 book?  I mean, they fought in 69, but Megatron was half Ratchet and entirely mad.  They fought in 24, but that was a computer simulation.  In any event, it's been a long, long time coming.  Megatron's boiling resentment seemed entirely justified.  His plans have been thwarted by Optimus time and again for millenia.   Manny Galan seems to be getting more comfortable with the art style he's emulating.  There are still some clunky pages, like the splash where Optimus gets shot by Megatron, but he does some very nice things too.  Perhaps most imporantly, the book feels like it's starting to get real direction and momentum now.  We get some hints as to what's to come; Megatron will confront Jhiaxus, and the Swarm will surely be drawn closer to our heroes.  A very satisfying tale.  This issue closes out the Transformers Dark Designs

book by Titan publishing, available used at Amazon.com.  Glad to see they ended it on a high note.
Posted by Jimtron at 10:17 AM

Maybe the cover helps make the story seem even better by comparison: With PRIME: TARGET reminding us all of THE worst episode of the TF cartoon (argue all you want that City of Steel, Autobot Spike, or any post-movie story was worse, but all those eps at least had decent ideas that could've worked with better execution; Lord Chumley wanting OP's head as a trophy on the other hand was just an unforgivably stupid and inappropriate concept) which was fresh in our minds as part of the first batch of G2-ified cartoons, and any Furman story in the book will necessarily read like Shakespeare, right?

And my first Headmaster Skullcruncher's on the cover! YAY!

But that's not the only thing that draws up conparisons to the toon. As you said, Prime/Megatron showdowns were remarkably sparse in the US G1 book, making their fight here seem like more of an homage to the cartoon. But even odder to me is Soundwave's statement that Starscream's record of treachery to Megatron was legend. Even if you factor in the UK books, that just doesn't sound right, as his comic "record" was more of betraying every leader he ever served under, and once going so berserk that he almost slaughtered everyone with the power of the Underbase. Since most of this happened while Megatron was MIA for various reasons, I'd almost expect Soundwave to be filling Megs in on it instead. Still, Megatron expressed a similar sentiment at the end of #57, so I guess Starscream already had a long rap sheet of backstabbing Megatron 4 million years ago.

I was also confused about the whole siphon deal: it implies the Matrix is just energy again, but it's back in Prime's chest, not his brain. And in issues to come, we'll see it resume the physical shape we associate it with...sort of. That was Galan's artwork for you, though I've never actually bashed him, since to me he seemed to genuinely care about who/what he was drawing more than Turner or even Delbo, givine this title the energy it needed.