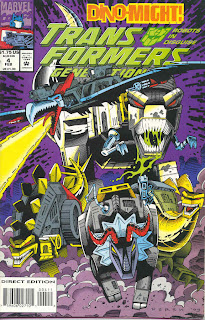 The fourth issue of the US G2 Marvel Comics run of Transformers contains two tales.  Both were penned by Simon Furman, colored by Sarra Mossoff, and lettered by Richard Starkings with Gaushell.  Devices and Desires!, the main story, was drawn by Manny Galan and inked by Jim Amash and Marie Severin.  Tales of Earth, part one, was illustrated by Derek Yaniger, who also provided the cover to the issue.

It's a great cover, featuring the five Dinobots.  Grimlock is, appropriately, the focus, and looks colossal.  The ground-based Dinos, Snarl, Sludge, and Slag, stampede towards the viewer, while swoop flies point.  It all works very very well.  Dino-MIGHT! it declares, redundantly.  Ss it turns out it's not really a Dinobot heavy issue, which dings the cover slightly.  Still, I'll overlook that given the superb rendering here.  Oh, and Prime is back in the Marvel box, this time sporting a big-ass gun.

Devices and Desires! opens on a desolate dreamscape.  Optimus is surrounded by robotic corpses.  When he approaches, some kind of black gunk sprays over him and he begins to burn, alien and corrupting and yet... familiar.  He's awoken from his foreshadowing vision by Kup, who trots out the old 'wake up - wait, we don't sleep!' line.  It seems that Grimlock has defied his orders to turtle-down in the Autobase and taken a crew to hit Jhiaxus.

Cut to another full-page splash of the Twilight, though Galan's rendition is not quite as spectacular as Yaniger's was back in issue one.  Grimlock and some commandos are approaching in a stolen maintenance scow, the Kiro.  His plan is simple, land, drop a huge bomb, skedaddle.  He's got the troops nice and rallied, though internally he knows he's using them to reassert his position as number-two Autobot.  Running to Optimus for help back in issue one really grates on him, as it turns out.  Unfortunately for him, his unpure motives have lead him into a bad outcome, as the shuttle is surrounded with troopers, his move anticipated.

Jhiaxus lays it out for him.  With the resurgence of the Autobots, security has been throttled way up, with many extra layers of security.  When Jhiaxus strikes Grimlock, Red Alert suicidally points a weapon at the Decepticon and is promptly and brutally killed.  This pacifies the Autobots, who are loaded onto a prison ship for transport to someone or somewhere or something called the Liege Maximo.  Thus does Furman lay the groundwork for the next story, though one he won't get to finish in this particular comic book series.  I do love this aspect to his storytelling, though, the layers within layers.

Grimlock's grim reflections on his failures as a leader are interrupted by the cavalry.  The Saber, a delta class strike ship in the Cybertronian Empire, is fireing on them despite having ALL of their security codes check out.  Grimlock takes advantage and leads a jailbreak, and soon he's got control of the ship.  (Not before Mirage is dispatched, though, with some fantastic lettering work.)   Particularly well done is the parallel between an anonymous G2 Decepticon and Grimlock.  When the captain of the Saber feels guilty for not putting up more resistance, Optimus calls his decision a noble one, putting the safety of his crew first.  Grimlock, alas, put his own ego first.

Grimlock frets that his next meeting with Optimus will be worse than anything the Decepticons can dish out, but instead finds himself left in charge of the Autobots.   Optimus needs to go to Cybertron to find out what his visions really mean.  I love the bit where Grimlock wonders aloud that Optimus would trust him again "After this m -- miscalculation."  Mutiny almost tripped from his vocal processor.  Optimus explains that Grimlock simply didn't go far enough, and should have captured a crew as well as a ship.  Of course, this mutiny got two Autobots killed, but that fact is glossed over in true comic book fashion.

The story is a bit thin.  I think that, in abstract, the choice of a character study on Grimlock in issue four is a good one, given that the last issue was really all about Prime.  Still, this does feel a bit like retreading old ground.  It's not bad, but neither is it great. 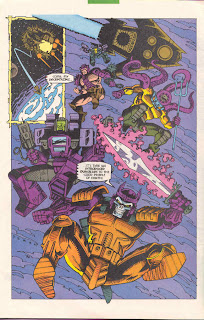 Tales of Earth, Part One, a six-page little story, gets it more right.  We open with four panels of devastation, with a spooky narrative about the carnage.  Human skulls, fires, craters, destroyed bridges, wrecked cars, grounded boats, scorched trees, this and more opens the story.  From orbit, the Warworld rains down fire and death as Bludgeon watches.  There's a certain irony that what might well be the end of the world would be wrought by a demon with a skull for a face, confirming so many old mythologies.

Down he leads his Decepticons, into the fray.  His goal is simple, draw Optimus Prime into the open.  In a nice bit of continuity, his forces are much the same as the Decepticons active in issue #80 of the G1 continuity.  They continue to devastate all before them, until a blast knocks the sword from Bludgeon's hand.  Is it Optimus Prime, here to save the day?  Nope, no indeed.  It's Megatron and Starscream, here to wrest control of the Decepticons back from Bludgeon!

A short story, very simple, but it certainly packs a punch.  We got so little carnage in the G1 run, and now it's just savage, wanton fury.  Furmans prose compliments the images of death and destruction beautifully.  Yaniger's artwork works well here, though I'm not as keen on his final shot of Megatron and Starscream.

Taken as a whole, we get one excellent, though simple, story, and one more ambitious but merely good story.  It's better than the previous offering, but still not all that compelling.  The main story didn't really advance the plot much, except for a bit of foreshadowing.  The backup story at least has some nice momentum to it.  It's still hard to see exactly where the Cybertronian Empire plot is going to go.  The threat is so huge, so massive, that it's hard to see how they'll start to combat it.  Worse, I find myself not all that interested in finding out.  The G1 Decepticons on Earth, at least, are fairly compelling.    Transformers Dark Designs

, from Titan publishing, contains both parts of this story if you'd care to check it out used at Amazon.
Posted by Jimtron at 9:37 AM

Huh, I always thought that Grimlock was about to say "mess."

Have to say, while I find this one of the better covers in the series (IMO they are all pretty ropey) it still lacks something. For one thing ALL the dinos are off model, particularly Grimlock and Swoop. Story wise, I got this one originally and wasn't that impressed. Furman seems to be just making it up as he goes, which feels incredibly amateurish. The chopping between short stories worked in the UK title, but here it just feels like odd. US books, particularly at Marvel had stopped running backup stories in the 90's. This feels somehow a bit too 70's for me. I also found the choice of characters used beyond the first issue weird. Why use the pretenders? Non of them were even IN the G2 toy range? I know Furman liked Bludgeon as a character and desperately wanted to maintain continuity with the first volume, but still - focus on the toys we could actually buy please!

In the end I'm not a fan of G2, in any way shape or form, but this particular medium was, in my view, just a mess. Marvel would have been better served rebooting the series rather than continuing it - especially in this badly drawn, sloppily written, mess.

Marvel were still using the two-story format in some of their books at the time - Thor had recently had a extended period with a regular back-up entitled "Tales of Asgard".

In his letters page piece in the first issue Furman stated that they weren't bound by a Hasbro mandate this time round and could very much go their own way. I've always felt that Furman was actually at his weakest when driven by heavy toy mandates - it was one thing to set up arcs introducing new characters/gimmicks or use a few individuals, it was another thing to mass dump a lot of new toys into a story. Overall the decision seems to have been to aim at the now slightly older generation who had (mainly) been hooked on G1, rather than produce a more blatant to advert for a younger audience, especially given how more remote the comics market had become for that generation.

thor was the only other title I'm aware of that had a backup either at Marvel or DC at the time. Which is certainly the exception not the rule. Marvel in general was going through a bad time creatively at this point. Bought out by New Line and at least 2 bankruptcy hearings, they were just treading water. With the exception of the X titles (of which there were far too many) they really hadn't got a clear directions. Transformers almost felt like an after thought.

While describing it as terrible may be over egging the pudding a little, it is certainly true I wasn't very impressed. I saw very little merit to the series and I stick with my first thought - a complete reboot based on the available toys would have been preferable to a continuation of the original plots. Especially since it was clearly heading in a direction it would not have gone otherwise.