No prizes for gu 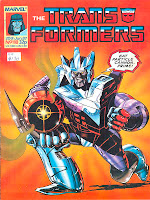 essing that this issue was by Simon Furman. The pencils were by Jeff Anderson, inks by Stephen Baskerville, colours by Steve White and letters by Mike Scott.

The cover was by Lee Sullivan and, while dramatic, it's just... awkward. It's one of those images that gets worse the more you look at it. At first you're struck by the dramatic composition and giant particle cannon staring you in the face but the longer you look you realise that Galvatron is gurning more than he is scowling, his legs and weirdly short and pointing in the wrong direction and his torso is at a weird angle. Nice idea - executed poorly.

This issue opens with the story thread that has not yet paid off - what Wreck-Gar has been doing. It turns out that the TV-loving Junkion has found the remains of Bumblebee, tragically destroyed by Death's Head back in issue.......... He uses his inimitable television-tinged speech patterns to explain the backstory to those just catching up and has decided to employ his considerable talents rebuilding the little Autobot (talents he previously demonstrated on the similarly afflicated Ultra Magnus in Transformers: The Movie).

Back at the volcano there is a stand-off going on. Death's Head has Rodimus Pr

ime and Galvatron covered while they argue about the bounty on the future Decepticon's head. Rodimus wants to cancel the contract but the bounty hunter won't have it, which is a position I can sympathise with, because he's been to a lot of effort already. Rodimus really could have played this better. It's understandable that he is wracked with guilt when he realises that the sort of people willing to hunt Galvatron for cash are not exactly nice but Galvatron is clearly the main threat here and really, what was he thinking to begin with? I get that he has made a mistake and unleashed a dangerous adversary but couldn't he just fight Galvatron with Death's Head's help and then pay the bounty hunter to go away. Or even double-cross Death's Head once the real work is done. Making two enemies here is a very bad move indeed, and unnecessary.

Luckily for Rodimus, Galvatron interrupts the posturing by shooting Death's Head in the arm, incapacitating it and forcing the mechanoid to retreat. Rodimus falls down the slope and Galvatron leaps after him, slamming him into the ground.

As Death's Head makes his tactical withdrawal past the already disabled Autobots Cindy emerges from beneath their shadow where she has been hiding. She hammers on Ultra Magnus' faceplate to try to wake him up, yelling that Rodimus Prime needs him.

This cuts us neatly back to the Rodimus, Galvatron fight, where Galvatron is gleefully explaining his volcano energy siphon plan while choke-slamming Rodimus intro the ground.

We find at thi 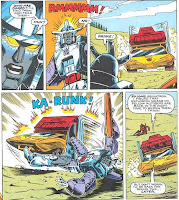 s point that Ultra Magnus is up and about again, but a little confused by events, particularly Rodimus Prime and the future Autobots. Luckily Cindy is on hand to explain and Magnus determines that the best way to distract Galvatron is probably by shooting holes in his energy siphon. This takes his attention enough to give Rodimus time to transform and run him down, planning to rejoin the Autobots. Galvatron does not give chase, but warns him that next time they meet will mean Rodimus' death.

Meanwhile Wreck-Gar has been working hard with the remains of Bumblebee and now, in his place, stands the newer, shinier and more powerful - Goldbug!

A word on continuity, or lack thereof. If you have been following Jim's reviews, or have been lucky enough to read the original comic, you would know that in the US stories Bumblebee was destroyed by GI-Joe in the the aptly named crossover GI-Joe and The Transformers and was rebuilt by GI-Joe and Ratchet into Goldbug. Marvel UK did not print this crossover and therefore an origin for Goldbug was required. Obviously there is no way to reconcile the two versions, so this makes one of the clearest ways that the UK title had at least some of its own continuity.

Either way, and this is not Furman's fault, but the Goldbug thing has always been pretty inexplicable in-universe. Rebuilt characters with different na 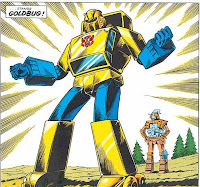 mes are one of the biggest indicators of Transformers' toy-commercial nature and with Goldbug it's not even as though Bumblebee has changed much. At least when Megatron turns into Galvatron he can legitimately be said to act and think differently - Bumblebee is only dead a few hours before he comes back with seemingly the same personality so why the name change? Unless, of course, Goldbug is actually a completely new personality that just has access to Bumblebee's memories and is created from his corpse, but that's worse! It's horribly creepy, and obviously not the intention (Unicron can pull that sort of stunt - he's the Lord Of Chaos - Wreck-Gar is not - not in that way).

That sadly inevitable, gripe aside, this was in general a great issue. I loved Death's Head becoming involved and his tactical withdrawal was very much in character and keeps him on the board as an unpredictable element. The rest of the issue was mostly just a big fight, as issues that heavily feature Galvatron tend to be, but it was still exciting to see that while the Autobots survived, it was only to retreat. Ultra Magnus, in particular, obviously still has his work cut out. Rodimus' position is tactically naive but believable when born of guilt and Cindy continues to work well in her slightly implausible capacity of the voice of reason.

provides some fairly lovely artwork here which Steven Baskerville elevates somewhat with some very precise inking. I particularly like the fine lines on Death's Head's outfit to show that it is made of some kind of futuristic kevla rather than metal.

Not an issue packed with shocking twists but as part of the whole saga of Galvatron and the volcano this one does the job very efficiently.
Posted by Bishbot at 1:54 AM

ironically the UK title did (eventually) print the GI Joe cross over, about a year late and completely out of context. No explanation for the contradictory origins for Goldbug were given and the UK readers were just left to assume the GI Joe cross over was an "alternate time-line".

As for why the name change, erm... no ideas on that one. The "look" change was clearly Wreck-gar getting creative, but why Bumblebee would choose a new identity seems to me to simply be him showing he's "grown". Much the same as Hot Rod choosing to change his name to Rodimus, so going from a Bee to a Bug was BB's way of saying "I'm more mature".

I hated the fact that the Throttlebots never had a shared origin in either book, for me it would have made more sense if his name change came attached to new powers and abilities due to some "re-format". But that idea wasn't even being considered back in G1.

The G.I. Joe crossover didn't really fit that will into the US Transformers continuity either, since it featured Ravage and certain Decepticon jets who had been taken out of the storyline already in the main series by Skids and Omega Supreme respectively.

But strangely, as an adult I've come to prefer the G.I. Joe Goldbug origin to the Wreck-Gar one (which I saw first).

Anonymous 1 - it's my recollection that the UK printing of the crossover was always billed as being "the US version of Goldbug's origin" and people just accepted it as being out of continuity with what were by then years old events anyway. The fact that the alternative would have been yet more reprints of old UK stories made it easier to accept.

There have been some fan attempts to try to reconcile the two stories & allow them to sit in a single timeline but they're a bit of a fudge and basically boil down to readers pretending the artist & letterer on issue #114 both made a mistake.