Bish's Review Space: Above and Beyond Episode 5: Ray Butts

(Anyone looking for a Transformers: Generation Two review from Jim, he asked me to convey the message that he has been having a spot of computer bother, but will definitely be back on form by next week) 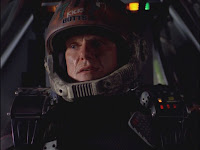 tten by Glen Morgan and James Wong and directed by Charles Martin Smith.

The Wildcards are taken on a special assignment by an unstable Lieutenant Colonel, Raymond T. Butts (played by Steve Rankin). He leads them deep into enemy territory to recover a squadron of abandoned Hammerheads. As the mission progresses and the 58th become increasingly frustrated by his erratic behaviour it emerges that Butts' main objective is to bury the bodies of the squad he abandoned. They hold a funeral service and retrieve the planes but are jumped by Chig fighters.

It becomes clear that the Chigs are trying to corral the squadron towards a nearby black hole. Their fighters can operate in its wash but the Hammerheads cannot. Butts orders the 58th to go on ahead and turns to face them. He takes out the Chigs but cannot escape the pull of the black hole. His plane is pulled apart to the strains of Johnny Cash's I Walk The Line and the 58th have to go on without him.

This is the sort of episode that a summary does no justice to. On the face of it the plot is fairly slight, and I've covered it above, but some of the best stories are character rather than plot-driven and Ray Butts has some of the best character work that this show has yet attempted.

e goes out of his way to be as unpleasant as possible. He has two obsessions, pancakes and the music of Johnny Cash, and they both play out beautifully by the end of the episode. In a terrific scene where Butts explains how he left his squad because they thought a mission was too dangerous, only to see them massacred when he came back, we learn that he doesn't much care for Johnny Cash but that one of his men loved the music. This is the sort of detail that makes an episode like this into a classic. The Southern, country-music loving marine is certainly a valid archetype but subverting our expectations in this way turns Butts into so much more.

The episode has a long way to go to make us feel sympathy for Butts. From the moment he appears he is confrontational and infuriating. He works the Wildcards hard and messes with their heads for no clear reason. Rankin gives him just enough manic intensity for us to realise that he cannot necesarily help this and want to see the real man behind the ticks. Even though the mission is wildly irresponsible he earns the respect of the 58th, and the audience, because his anguish comes from love for his men rather than the narciscism he appears to display at the start. The Wildcards realise they could end up the same way and are equally afraid of dying alone and unburied on some alien planet.

Butts' death, being dragged into a black hole with Johnny Cash's I Walk The Line playing, is a splendidly tearjerking sequence. Butts transitions perfectly from bravado to acceptance, gives a sad look at a fam

ily photo that belonged to one of his men, and goes to his fate. That one look says it all. His black ops lifestyle has prevented him from having a photo like that, but the men in his unit were his family, and he's going to honour them. This is conveyed without words, without much sentiment and the capper to the episode, where the Wildcards jettison their breakfast pancakes into space to honour a man whose body they couldn't recover is the sort of haunting image it is only possible to convey in science fiction.

The fact that Butts dies in exactly the way his friend wished he could have gone out is perhaps a little too telegraphed but I'm inclined to go with it. Space is never the most strictly naturalistic show from a storytelling perspective.

The special effects in the black hole sequence are a little ropey, occasionaly recalling a seventies-era Doctor Who intro sequence, but, frankly, there's enough heart there that I really don't care. 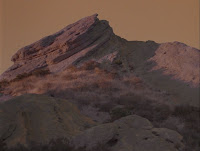 n is clearly "played by" Vasquez Rocks which is an extraordinarily recognisable rock formation that has played many, many alien planets over the years, most notably in Star Trek's episode, Arena, (among others). It's a stunning location and the Space producers do alien it up with some nice prop trees and a yellow sky but the drama is occasionaly undercut a little for me by being able to spot the exact place Kirk fought the slow-moving lizard man.

The United States gets into bad situations in Guatomale and the Karakoram mountains in the 2050s. You have been warned.

It's nice to see Hawkes and Wang enthusiastically enjoying a recording of Macbeth. It might be the Roman Polanski version but I haven't watched it recently enough to tell.

In Ray Butts Space: Above And Beyond has its first absolutely classic episode. A lot of credit should go to Steve Rankin for acting such a memorable character but the cast, writing, and especially the directing gel together so well that anyone, with no familiarity with the show or characters at all, could hardly fail to see the quality on display here. It's a simple story, but beautifully told.
Posted by Bishbot at 10:07 AM