Bish's Review Space: Above and Beyond Episode 7: The Enemy

The Enemy was written by Marilyn Osborn and directed by Michael Katleman.

The 58th land on Tartarus, a hellish planet with a toxic atmosphere that is the site of a battle that has lasted since the beginning of the war. When they arrive they come under friendly fire from a lone marine who appears to have killed his comrades - corpses litter the landscape. The situation deteroriates when they realise that they have been affected by a new Chig weapon, some kind of energy discharge that can affect the area of the brain that controls fear. As their phobias begin to mount so does the paranoia, and before long the Wildcards are facing each other in a tense mexican stand-off...

The basic story, while not exactly a new one for Science Fiction, is a strong way of getting into the heads of the characters and showing us a more vulnerable side. It is also a good way to create tension in a show that generally has to focus more on fairly professional behaviour. Marines, in general, cannot spend their time pointing guns at each other and arguing against superior officers - they would be court-martialled. This sort of thing works brilliantly on TV, however, so you can expect to see one of these in pretty much any Science Fiction show with a universe that can justify it. For the record, series creators Morgan and Wong wrote the similarly themed Ice for The X-Files which is generally regard as one of the best early episodes of that show, so they know their stuff.

Particularly pleasing to me is the fact that the 58th almost immediately realise something is wrong with them. Too often in this kind of story the characters start acting oddly but only the audience seems to notice for most of the episode. This can get really annoying so Osborn has the characters work out what is wrong quite quic 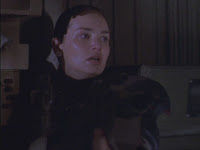 kly. This changes nothing dramatically, as the characters can't neccessarily resist the effects of the weapon, but it does require less suspension of disbelief.

The various phobias of the 58th aren't brilliantly original but they do give us some insight into their formative memories. Wang is scared of bugs because he grew up in "that hellhole" - no more detail than this, but it's enough to make you believe he joined the marines to escape from a life of poverty. Vansen is frightened of the dark because it was dark the night that the Silicates came for her parents and while trying to repair the radio she hears some electronic clicking and freaks out because it sounds like Silicate transmissions. Hawkes is claustrophobic because of the In Vitro gestation process, which is fairly plausible. West's fears revolve around losing Kylen - could they be anything else? And Damphousse is afraid of blood. Unless I missed something, I don't think this is explained, which is a shame, because I feel Damphousse could use her own episode right about now.

The atmosphere of the episode is generally very well handled. The marines they meet who have been affected by the weapon are terrifyingly unhinged and I love the scifi touches such as Chig mines that activate a beam that slices you to pieces and the corpses strewn about, while hinted at rather than shown, are still very eerie. The sound design is excellent, with echoes and alien fizzing noises and the fact that the Wildcards have to use breathing apparatus adds palpably to the sense of isolation from each other.

While the budget obviously wouldn't support a gigantic multi-front battle and, in fact, we do not even see a single Chig in this episode, the idea that there are planets out there covered in human and Chig ground forces that have been locked in battle for months adds a lot to the sense of how this war is fought. It's not just about the Saratoga and our little band of heroes.

The climax is quite touching as well, as the Wildcards, trying desperately to keep it together as they cross a minefield yell out the marine marching cadence I have quoted above. I especially love Damphousse's soulful rendition of her line. As with anything like this, there's a chance for it to become cheesy or flag-waving. This comes across as neither. Whatever your position on the military and its rituals, this stuff is important to these characters and it comes across as very heartfelt. Not only do the Wildcards have each other, they also have their training, and it would be a heck of a comfort in a situation where you're not even sure of your own mind.

The episode is told in flashback as McQueen and Commodore Ross interview each of the Wildcards in turn to try to determine exactly what happened on Tartarus and whether anyone was guilty of deriliction of duty. This is more of a different framing device than a serious dramatic one because it is quickly clear that none of the Wildcards would have betrayed the others or neglected their duties unless something strange was going on. Space just isn't really that kind of show. It works well enough but the events of the episode proceed in a linear fashion so having them narrated by different characters really doesn't add anything. If there had been more of a Rashomon style setup - something very possible with the psychological effects of the Chig weapon - we might have ended up with a more memorable hour than we actually got. As I noted above, Ice really was excellent, so maybe the lack of inspiration here comes from Morgan and Wong having used all their good ideas in that, or maybe the blame is down to the third writer.

Tartarus, for all the excellent sound design and shot choices, is, unfortunately, very obviously a soundstage smeared with dry ice. Most of the time this doesn't matter too much, and a lot of the episode takes place inside the ISSCV, which is a decent standing set, but there are a few too many times where the planet looks like somewhere we've been before, but with more dry ice and lower lighting. I do like the description of it though:

Wang: "They say this planet didn't have what it took to become a star."
Damphousse: "Looks angry about it"

Space does at least try quite hard to acknowledge that a lot of planets won't support human life.

Lastly, Hawkes' last line: "The enemy was down there but it wasn't Chigs" falls rather flat. I get what they were going for - the idea that at any moment a person's fears and weaknesses can take them over, but no-one would really say that line and it feels especially strange coming out of Hawkes' mouth. This is just after McQueen has informed the Wildcards that their story about the weapon has been believed and it's just a weird tonal shift that feels somewhat rushed.

Not a lot this week, except the aforementioned stalemate over Tartarus having been going on a long time and a joke that if you used the Chig mind-altering weapon over New York or Los Angeles, no-one would be able to tell the difference. Stand by for incoming satire!

I tried to find some provenance for the marching cadence that the 58th chant at the climax. It seems to be a varient on the famous Mickey Mouse March, used ironically in Full Metal Jacket and I have found it mentioned on a couple of US Marine websites but without a date or a writing credit.

Vansen makes a joke about doing "The Hustle" - will 70s dance crazes really still be known in 2063?

Strangely, The Enemy was an episode I wasn't wild about but in the end I had a lot of positive things to say. I craved a bit more psychological insight, and the flashback in structure could have paid off, but overall a tense, well-presented forty-five minutes of television.

Space Above and Beyond - The Complete Series

is available on DVD fairly inexpensively at Amazon.com.