Good Causes, One and All

Due to the computer problems I experienced last week, I'm pretty far behind where I'd like to be in terms of Ark Addendums, so I'll be taking another week off from them.  Perhaps next week I'll be back, we'll see.  In the meanwhile, I figured I'd highlight some worthy causes.

First up, one of my heroes Simon Furman has expressed an interest in picking up the old Marvel Comics series at issue #81, similar to how Larry Hama did with GI Joe.  Personally, I'd be very curious to see where he'd take the story, since the old US/UK G1/G2 continuity was and is my favorite Transformers saga.  (Beast Wars and Animated are both amazing, but the sheer scope of those hundreds of issues are so magical to me.)  There is a petition to be signed, and they're closing in on 1000 signatures.  Let's make that goal happen, and we'll see where to take the movement from there:  http://www.petitiononline.com/tf81idw/petition.html

Next up, I've had some folks write to me and ask if I'd help promote their petition for more Animated in comic form.  Yes, yes, a thousand times yes please.  I'd love to see Marty and Derrick return to the universe as a comic.  I, more than most, know how cool S4 would have been and I'd love to see it continue.  Oh, and if that means that I'd have enough material for an Almanac III, so much the better:  http://www.petitiononline.com/TFAIDW/petition.html 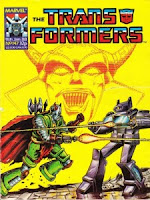 Finally, the good folks at Auto Assembly, the most amazing Transformers convention ever, are working feverishly to try to raise enough money to bring the one, the only, the amazing Geoff Senior, to their convention.  Sadly, I won't be attending this year, but if you will be (and if you're anywhere in Europe, you should be) then consider heading to their Geoff Senior page and possibly contributing a few dollars... er, pounds, euros, whatever.  With Death's Head starting to pop back up in the Marvel Universe these days, could there be a better time to get this amazing artist down to Birmingham to mingle with the fans?

Three excellent causes.  If any of them seem like something you might be interested, then do what you can to make it happen.
Posted by Jimtron at 11:52 AM

OH! THIS MEANS SO MUCH TO ME! Thank you, Mr. Sorenson. When I saw that tweet from Sentinel Magnus, my heart jumped, and now, I'm happier than ever. In less than 24 hours, we've accumulated 230+ signatures! Thanks so much!