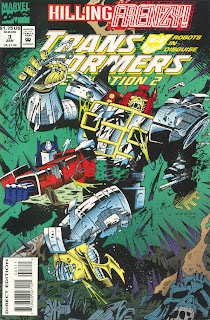 The third issue of the US G2 Marvel Comics run of Transformers contains two tales, necessitated due to difficulty in having one artist do a full 22 pages per month.  In fact, the rest of the run will continue in a similar fashion.  The single cover is by DerekYaniger, as indeed all twelve are.

It's a very nice cover, stronger than the last one.  Optimus Prime deals a savage blow to Jhiaxus' midsection, ripping out material and exposing his spine.  Gusts of fluid spurt from severed hoses while glass and metal shatter.  Prime, too, isn't much better off, with spikes impaling his arms.  Derek kinda went nuts here, and it works.  This is the kind of raw power his art style can exhibit.

The first story, Primal Fear!, is written by Simon Furman, with pencils by Manny Galan, inks by Jim Amash & Marie Severin, with Starkings w/ Gaushell as 'letterbots' and Sara Mossoff as Colorbots.  Editors Tokar and DeFalco are credited, respectively, as 'primal' and 'fear,' continuing the tradition of keeping things cute on the title block.

It opens with a lovely image, one of my favorites of Manny Galan.  If I can brag again, I own the original art to this piece, a recent acquisition.  A tight close-up on a jaggedly split pane of the faces of Optimus Prime and Jhiaxus, while Furman waxes rhapsodic on Fear -- what could be nicer?  We quickly shift from philosophy to fracas, as we get a battle scene not unlike the cover, though not nearly as well rendered.  (Sorry, Manny.  I know you had a hard time drawing in someone else's style.)  They battle an incredibly violent battle, complete with escalating taunts and bravado, which seems out of character for both participants.

Ah, but this isn't a flaw, this is a plot-point.  Up on the Autobot shuttle, a lonesome Hound broadcasts an expository warning.  It turns out that, while fleeing the craft trailing them, Optimus ducked into a quadrant of space where none return.  Tempers on both sides flared until a battle erupted.  Hound took a stray blast, which is why he didn't participate.  Something here is exacerbating the combative tenancies of all who enter, dooming them to oblivion.  Seems like a familiar plot somehow...

Back on the planet, Jhiaxus and Prime continue to battle, as do their men.  Prime manages to get away for a moment and collect his thoughts.  Deprived of a venue to vent his battle-lust, Jhiaxus begins to freak out, remembering himself as the petty tyrant he once was, a rather lovely image.  Optimus sees this as the breakthrough it is and approaches his opponent with calm reason.  As his words start to sway the Decepticon, shadowy parasites begin to erupt from their very bodies.  It seems that these are emotional parasites, feeding off of conflict.  The two sides have little choice but to call off their fight.  Optimus wistfully remarks how sad it is that no creatures before them could safely traverse the nebula, while Jhiaxus internally debates what he's learned today.  Ultimately, he rejects the notion that all life has value, at least in part to justify the last few million years of his existance.  He orders the planet destroyed from orbit even as he resolves to crush the lingering doubt within him... by destroying the Autobots.

If this tale seems familiar, it's because it is.  Not only has it appeared in countless science fiction stories and television programs, but it's actually appeared in a Furman-penned tale before, admittedly in the UK.  It wasn't all that long ago that my colleague Bish was reviewing Distant Thunder, where dimensionally displaced Transformers battled for the amusement and nourishment of alien parasites.  No points for originality here.  It's also a bit odd to get a sort of pseudo stand-alone tale so early in the run.  Yes, it deals with the pursuit craft launched in issue #1, but the emotional focus of the story is on dealing with the alien infestation.  Odd choices, all around.  The artwork, too, is fairly mixed.  Galan is clearly a talented artist, able to produce some lovely images, like the split faces or Jhiaxus' brief flashback or the rather dynamic shot of Optimus Prime in truck mode racing away from Jhiaxus, but when he's trying to do the Yaniger style it comes across as forced.  Between the repetitive and slightly off-focus story and the gangly artwork, this is a fairly weak offering.

Luckily, there is one more story in this book, albeit only six pages long.  Old Evils shares a writer, colorist, letterer, and editor with Primal Fear!, but the artwork is all Derek Yaniger.  We open where Primal Fear left off, with Jhiaxus storming back onto the Twilight in a state of disrepair.  The primitive Autobots have left a bad taste in his mouth, but, he reasons, at least there are no analogous primitive Decepticons.  A lovely transition point, that is. 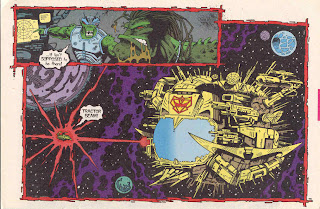 In another galaxy, some disgusting reptilian aliens are worried by a planet on their monitor.  You see... it isn't SUPPOSED to be there! A massive ship bearing Decepticon markings (G2 Decepticon markings, actually, which really is a bit awkward, but I'll let it pass) has them in a tractor beam.  These aliens are no pushovers and attempt to fight back.  Inside, we get some familiar faces.  Bludgeon is running this operation, and orders Fangry to slaughter the occupants but leave the craft mostly intact.  (The piece to the left is another one that I've got the originals to, if I can continue to brag.)

With this minor obstacle out of the way, Quake asks Bludgeon for a new course.  Bludgeon thinks on that.  He's got a new army built, just awaiting the spark of life.  (I almost wrote 'sparks', but that idea is still a few years in the future.)  Optimus Prime, though, is a difficult target, protected by Cybertron or the Autobase... how to draw him out? Ah, but an idea occurs... he orders their massive ship, which will soon be revealed to be called the Warworld, to Earth!

It's a very small story, reintroducing to the audience the mainstream Decepticons.  It seems that Bludgeon has been busy during his self-imposed 'exile', somehow scavenging up a mighty vessel.  He looks amazing here, doesn't he?  When Yaniger is good, he's very, very good. The story is much less ambitious here than the first tale is, but also much more solid. It's a tale that upon first examination seems ancillary to the main plot, but it feels connected somehow.  In this way, it's very much a mirror to Primal Fears!, which is more of a stand-alone tale wearing arc's clothing.

So, G2 #3.  More mixed than I wish it was, but certainly worth a read.  Both parts of it are available for sale in the only slighty out-of-print Titan collection  Transformers Dark Designs

.  I'm still hanging on for the ride, but so far G2 hasn't yet lived up to the potential promised in the very strong first issue.  Let's hope that changes.
Posted by Jimtron at 10:25 AM

What? No comments on the misleading cover text?

Frenzy isn't killed, after all. He never even appears.

I really liked this issue when it came out, actually. I was very happy to see a Transformers comic again (and Simon writing it), and this plot felt very "Star Trek: The Next Generation" like to me, which I was a huge fan of back then. So I loved every bit of it.

Star Trek: The Next generation hasn't aged well though. I guess that's why Simon isn't as anxious to get back to G2 as he is about getting back to G1 (as are we all: see the IDW message boards if you haven't heard about the big push to get a follow up to Marvel's G1 # 80).

Oh, and as a big fan of the early days of G1, I was quite happy seeing Hound having such a huge part this story :)

Hans, I wouldn't have knocked the plot for being derivative of ST:TNG (more TOS in my opinion but very ST one way or the other) if he hadn't already done it himself.

Isn't this the issue with the creatures which are said to be related to the Venom symbiote from Spider-man?

I felt one of the reasons the G2 series failed was because it lost momentum with the first few issues after the spectacular issue # 1.

IMO, the series only started to pick up around issue 5 or 6, which might have been too long to gain the interest of new readers who were important to sustaining the book.

I'm still bemused as to why it was necessary to "copy" Yaniger when he wasn't even the penciler? Especially since his style was, IMO, ugly.

I know that was the way Marvel wanted to go, down and dirty, but to be honest it just came across as sloppy.

I didn't get this issue first time round and to be honest from this review, I'm glad I didn't.

I really liked Yaniger's style, and I thought he put a lot of effort in it, he could be very detailed.

That being said, I also still loved Wildman and Baskerville's style back then, and wished for a lot more from them than just the few pages that they did in issue # 2.

I also never enjoyed Geoff Senior's art more than I did on G2, where he was awesome :P

Anonymous: to me, the series was a roller coaster all around, but I can see people only really getting into it from issue 4 or 5 onward. To me, though, G2 will always be the best thing that ever happened to Transformers comics, except maybe the fact that Simon took over the writing of the US comic in the first place.

And LBD: I never realised it, but there are a lot of similarities indeed. If Spidey and TF's were still in the same universe at this time, they (the various symbionts) could definitely be related!