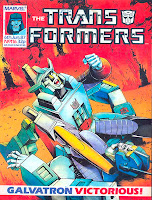 art 2 was written by the ever-prolific Simon Furman, pencilled by Geoff Senior, lettered by Richard Starkings and coloured by Steve White.

The cover was by Jeff Anderson and unfortunately doesn't quite live up to the art actually within the issue. Once again I like the idea behind a cover much more than the cover itself. The foreground is pretty good. Anderson always brings a believable, solid approach to the robots which works very well and in particular his rendering of Ultra Magnus's head and shoulders has always been very good. Galvatron, however, is perhaps a bit too blocky, looking a little like someone wearing a cardboard box as part of a robot costume rather than an actual living entity. Similarly the anatomy is also a little off as Ultra Magnus' legs appear rather foreshortened. It's a tricky perspective and it's still an arresting image (albeit one about which my first thoughts were somewhat childish when I first came to review it - once you've seen it, you can't unsee it).


Following Galvatron's explosive entrance at the climax of last issue we, in time-honoured dramatic fashion, cut to a location nearby, where everything seems tranquil and the head of the local rangers is discussing the forest fire and saying how it's all under control. This

proves overconfident, however, when another ranger runs up to him and tells him that they've got trouble - "BIG trouble!" Making for an effective page-turn to title splash! And what a splash it is. A nitpicker (like myself for example) might suggust that Galvatron and Ultra Magnus are actually slightly too large here compared to the humans, but really, not by much, and it does nothing to devalue the power of the image here. Senior seems to love drawing these two, and putting Ultra Magnus through the ringer - look at the pain on his face!
The next page gives us a brief summary of the end of the previous issue but, unusually, it's all in captions while it shows Galvatron beating on Ultra Magnus in the present. When Magnus thinks about Cindy's safety we get a more conventional recap, including a reproduction of some of last issue's panels, with a lovely little Senior version of Dan Reed's fantastic "Galvatron leaping through flames" final panel.
Galvatron taunts Ultra Magnus, and calls him a follower of Rodimus Prime, which confuses him, as Rodimus is unknown in this time. He tells Galvatron that he follows Optimus Prime but Galvatron does not react, as he is in full fighting fury. Magnus asks Galvatron what his plan is but again the Decepticon does not answer, preferring to make grandiose boasts like "I am power incarnate!"
He shrugs off multiple blaster shots and then crushes Magnus' weapon before reaching out and gouging the Autobot's optics, which crack painfully. Forcing himself to remember that Cindy still needs his help, Ultra Magnus summons some more strength and hurls Galvatron away piling on the reeling Decepticon with blow upon blow.
Galvatron is down and appears to be unconscious so Magnus turns away to try to find Cindy. He does consider finishing Galvatron off but thinks it would take too long while Cindy is still in danger. T

his proves to be the wrong choice as Galvatron springs up almost immediately, transforms to cannon mode and shoots Ultra Magnus square in his back. The Autobot goes down - hard.
Meanwhile, Cindy is still lost amid the flaming trees, calling out for the Ultra Magnus and beginning to lose hope when she is surprised by a blinding flash of light that gives way to reveal yet more robots! At this point we can only see a glimpse of their legs but anyone with a fair grounding in Transformers ought to be able to make a fair stab at guessing they are Rodimus Prime and Blurr. Nonetheless, considering what happened with Galvatron, Cindy's panicked reaction is very understandable. I find myself wishing they could have hidden Rodimus Prime's identity better, but I don't think this story was designed to be read after twenty-four years of exposure to his character model in all forms of media, so I think it's safe to let that slide.
Back to Galvatron who is now dragging Rodimus Prime up the slopes of the volcano that Cindy mentioned. He explains that he wanted Ultra Magnus to see his grand plan before despatching him and shows him an enormous machine that he has built over the volcanic crater. He plans to use it to draw power directly from the Earth's core and turn himself into "Galvatron the god!" (I guess we know what the forest fire was keeping people away from then...)
Rodimus does his best to calm Cindy down and assure her that they are on Ultra Magnus' side. To her credit she goes from terrified to angry very quickly when she talks about Galvatron's deception, given the circumstances and Rodimus seems very impressed with her. The issue ends with Rodimus telling her, and the reader, that he, Kup and Blurr are the best chance there is to stop Galvatron and Death's Head.
We've been here before: Ultra Magnus locked in combat with a raging Galvatron against an apocalyptic background. The good news is, however, that this feels more like a sequel to Target: 2006 than a retread. These two have definitely gained the status of arch-nemeses and it's hard not to be gripped by Ultra Magnus' battle against an enemy who at every turn proves his superior. Hopelessly outmatched heroes who don't know when to quit are a pop-culture staple and Ultra Magnus fills this role nicely, although in a tragic mold, rather than a plucky one.
Galvatron's plan is sufficiently grandiose and insane. We saw last week that he was capable of a certain degree of cunning and the volcano contraption indicates a great deal of technical know-how but there is little of that on display here. He is in full-on berserker mode. This isn't necessarily a problem, fitting, as it does, with his previous appearances and battles with Ultra Magnus but there is a chance that if he spends too many issues like this he will cease being an interesting villain and become more of a force of nature than a character. This does not preclude a good story from being told, of course, but there is always a danger of diminishing returns with such a one-note approach. Nonetheless, this has not happened yet, and Death's Head is returning next issue which should provide us with a good contrast to Galvatron.

Geoff Senior's art is, as always, superlative and although the recent issues have not 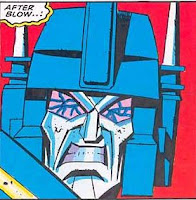 had the depth of colour that the earlier ones (like Target: 2006) did, his crisp style is well suited to the rather flatter, less realistic colouring. It should be pointed out, however, that these issues are still far and above the colour-work that was going on on the US book at this time. My only art nitpick, and I think it is a colour issue rather than a line issue, is that the visuals of Magnus' smashed optics don't work as well or as shockingly as they should. The cracks are too broad and don't look real to me.

A great issue with a great rematch and the promise of escalation in the near future with the arrival of the Autobots and Death's Head primed for an explosive return. Get ready for Hunters!
Posted by Bishbot at 4:27 AM