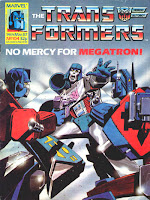 on: Part 2 concludes the arc begun in Prey! and was written by Simon Furman. Jeff Anderson took over the art from Will Simpson (while I like the mix in styles I wish they had been able to keep one artist per story, at least - the curse of a weekly book, I guess). Steve White coloured the story, Annie Halfacree lettered it and Ian Rimmer edited.

The cover was by Geoff Senior and is really very good. The characters are well drawn and dynamic, and we get to see Megatron in a position that he's not often in. That said, I am not a fan of this development in the actual story, but the cover is well done and shows what can be achieved with careful colouring on Senior's stylised line work. I mean - just look at the lovely rivets on Ultra Magnus' head!

The Autobots (including Omega Supreme!) are gathered at Optimus Prime's grave site on Earth, paying their last respects. Ratchet is the bot who has the honour of delivering the eulogy which helps the uninformed reader understand just why they all think Prime is dead. Perceptor is sure that this is what Prime would have wanted, which gives us a rather nice segue into -

Optimus Prime alive and well on Cybertron, explaining that what he actually wants is Megatron's head! He has planned a diversionary attack by the Wreckers to lure away Megatron's security so that Prime can confront Megatron in Polyhex.

Following last issue's brain swap shenanigans with Straxus, Megatron's body is still confused as to which mind inhabits it. He remembers the brain swap, and the subsequent destruction of Straxus'

head, from both perspectives (again, allowing new readers to catch up). Ratbat disturbs his reverie by informing him that the Autobots are attacking. Megatron's befuddled response tips Ratbat off to what is actually going on as the Decepticon leader(s?) wanders off, only to run straight into Optimus Prime!

He prepares to fight but Ultra Magnus appears behind him. He explains to Megatron, while chokeslamming him against a wall that getting to destroy Megatron will help him put Impactor's death behind him. Megatron wasn't really involved in that so I'm not sure how psychologically healthy this is, but Prime seems to agree with the idea.

Optimus tells Megatron he wishes there were a better way but unfortunately he will have to die. Megatron concentrates and begins to unlock an ability only seen once before, in the "so old it's barely canon" Raiders Of The Last Ark - he connects his internal circuitry to the anti-matter energy of a black-hole in space and uses it to smash the Autobots around. This is very out of left-field but I don't really mind because I quite like the idea of the dangerously unstable Megatron having a dangerously unstable ability that is so destructive even he would only use it while totally out of his mind.

Ratbat decides enough is enough - Megatron will destroy them all - and gets Octane to target the space-bridge and transport Megatron, Optimus and Magnus to Earth. As they disappear the Predacons appear - telling Ratbat that they have been sent by Shockwave to find Megatron.

Megatron appears right in the Decepticon camp (convenient!) but luckily for Shockwave he appears to have lost his memory. Soundwave mindreads Megatron (we're all about little-used abilities today) 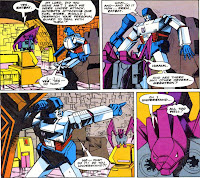 and concludes that the two personalities in Megatron's mind are clouding his thoughts.

Elsewhere, Optimus Prime arrives at the grave site (really too convenient!), surprising the Autobots and Ultra Magnus ends up in parts unknown, relishing the opportunity to explore the planet while looking for the Ark.

This has been a long arc with several ups and downs. I felt it improved last issue, with Straxus' strike at Megatron and Optimus Prime's influence on the Autobot resistance but it seems to me that the potential has gone rather to waste and the arc ends on something of a damp squib.

Perhaps the biggest challenge that Furman faced here was timing. I'm not certain, but I would guess that since the UK book was contracted to run every US issue, the timing of when they had to fall was quite precise, in order to fit them all in. Having Afterdeath! looming meant that Furman had to get all of his toys back in the box just the way Budiansky left them in Decepticon Graffiti! That would hobble any writer, so it's not surprising that the ending of this arc rather undercuts the drama. The problem here is that Furman built for too long and did not allow things to end at a natural pace. Because we have several different strands to follow, this eleven page issue has a good two and a half pages only on exposition of things we have already seen, leaving only eight and a half pages to wrap up a complicated plot. Because of this everything happens far too quickly. I find it very hard to believe that even with a diversion Prime and Magnus could simply walk into Polyhex, and there is something dramatically unsatisfying about seeing both huge Autobots beating Megatron down at the same time. Not having enough pages to deal with it also grants us such absurdities as Megatron and Prime being teleported back to their troops with no explanation. Equally jarring is the time wasted by Ratbat talking to the Predacons. They had to be back on Cybertron, because Budiansky had not yet brought them to Earth in the US book, but in this story it's just filler that the plot can ill afford.

The other complaint I have is that the whole "Optimus Prime fakes his death" plot is too overcomplicated and unbelievable. This raises its head here, with Wheeljack, who helped Prime build the facsimile construct, attending the funeral and not once raising a suggestion that his leader might be alive. Either he thought this was all part of the plan and he is stupidly loyal or he cannot recognise his own handiwork, or, in fact, count, because surely there would hav

e been twice as much dead Prime as usual, and, if not, why didn't Wheeljack insist upon a search?

That aside, there are a couple of good things in this issue. I very much like the fact we can see the start of Ratbat's ascension here. It's a good detail that goes well with his upcoming appearances in the US issues. I think that the failed mind swap has the potential to pay off in interesting ways, although it wouldn't have done for UK readers at the time because Budiansky obviously wasn't using it. Luckily Megatron has a tendency towards instability, so the difference wasn't too jarring.

Jeff's art is to a high standard here with no massive highlights. I'm no astrophysicist but I like the effect of Megatron's black hole weapon - I suppose the energy had to be black to sell it, really. The characters are on model and the fight choreography isn't bad - Prime's head is still too big though...

The Prey/Resurrection arc is over. Never up for UK readers would be Afterdeath!, from the US book, which Jim has covered. We will pick up next week with Wanted: Galvatron - Dead Or Alive! and I couldn't be happier!
Posted by Bishbot at 12:07 PM

"Megatron concentrates and begins to unlock a hitherto unseen ability - he connects his internal circuitry to the anti-matter energy of a black-hole in space and uses it to smash the Autobots around. Anyone who had Megatron's toy wouldn't have been surprised because it's in his techspecs but for everyone else, this is very out of left-field."

Actually, Megatron used this ability once before in the UK comic, in the never-reprinted story "Raiders of the Last Ark". I refer you to your own review of it (http://boltax.blogspot.com/2009/01/review-marvel-uk-21-raiders-of-last-ark.html)! I'm afraid Jeff Anderson can't be credited for that particular visual effect...

Wow, you're right. Thanks for pointing it out. I will correct it posthaste. I didn't remember that at all. I can only think that there has been a lot of Gin and Tonic under the bridge since I reviewed that...