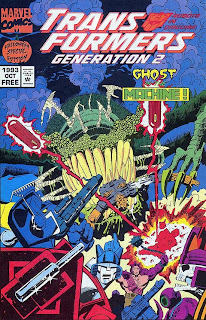 Oh, that glorious moment when we get up to the G2 comic proper is almost upon us.  However, we're not quite there yet.  We've been going through the G.I. Joe crossover, but chronologically the next book published was Ghosts, the free Halloween issue.  Gloriously, Simon Furman returns to the book as writer, and Geoff Senior as artist.  Colors are by Sarra Mossoff, and Letters are by Richard Starkings & Gaushell.  The cover is also by Senior.

The cover is pretty cool, in a weird sort of way.  Autobot and Decepticon alike face off against a monstrous beast, all jaw and teeth.  It's pretty terrifying, especially the generic guys getting torn in half and blasted to pieces.  If Senior was going for a Halloween vibe, he's achieved it.

The book itself is a pretty straightforward tale.  Clocking in at just 7 pages, Optimus Prime and Bludgeon battle for a cache of ancient, super-advanced weaponry.  Hanging over both sides is the threat of the 'main Decepticon army', which, according to Bludgeon, has Optimus Prime badly outnumbered and outgunned.  That's a pretty big change from where we last left things, with the Autobots in control of Cybertron and Bludgeon on the run.  However, Budgeon's band is called 'rogue Decepticons,' indicating that something else is going on here.

While the 'Bots and 'Cons battle, Hot Rod looks for a way to create a holographic diversion.  Almost on cue, the beast from the cover shows up and demands that both sides vacate the premises.  Optimus is elated... until, of course, we discover that Hot Rod was unable to make heads or tails of the system.  The Autobots skedaddle, and Optimus reassures his troops that it's all for the best.  Alien supertech, even in Autobot hands, might not be a good thing, after all.  They'll fight on with guts and determination!

This is a queer little duck of an issue.  It sort of picks up where issue #80 left off, at least in terms of where most of the players are.  It hints at a greater canvas, though it reveals little.  This was probably a wise choice.  There will be a few continuity hiccups that this book introduces, but since this came first it's not really this book's fault. 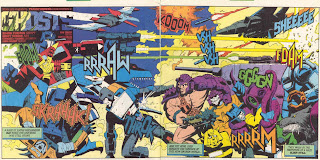 The artwork is, of course beautiful.  Senior manages to fill every panel with action and strangeness.  The designs are a bit weird, though.  Grimlock's blue now, Sideswipe is black, and Optimus is sporting a bandoleer.  Some of those are because of the new toys, but others are artistic choices that will be consistent throughout G2.  Everyone's packing a LOT more firepower, it seems, and this issue is one of our first hints of that. Oh, and great lettering here.  You can see why they needed two letterers, they really outdid themselves!

Tonally, this issue is a bit weird.  It's a pretty light-hearted outing, what with the silly little alien reveal at the end, but it alludes to a much more serious conflict.  I'm not sure if that was a conscious effort on Furman's part, to try to transition from the latter days of the G1 comic to what was to come in G2, but I don't think it quite works.  The story, or at least the resolution of the story, is a bit too cute given the darker themes that are being introduced here.

Ghosts has only been reprinted once, to my knowledge; as a backup for the second issue of the G2 ongoing story.  Since that came out only two months after this, that doesn't make it much easier to track down.  It's an ok prelude to the G2 tale, but hardly essential.
Posted by Jimtron at 5:17 PM

I never got to see this until the back-up reprinting you mentioned, and wow, did it ever confuse me. Is this story even considered in-continuity with the G2 comic?

I don't think they ever said anything either way in the reprint issue itself or later letters pages, but my copies are elsewhere at the moment. There are fan timelines that include it and those that leave it out.

I'm looking forward to reading about G2, as it's always bne pretty mysterious to me - I didn't know it was happeninig and chanced upon a copy in my local comic shop. It must have been an early issue but I just found it really bewildering and didn't bother getting into it. With hindsight I think I was reading one of the 2 ropey UK G2 issues that were supposed to kick off the G2 story (rather than the Cobra storyline in the US) - you'll have to cover them as well as this stop-gap!

It's a real treat to see the scan of the Geoff Senior splash page here. Not only has everybody suddenly got more weaponry, but the Pretender shells look musclier too!

Can I get a Collected Comics of G2?

..that is, anybody know where I can buy one??