Bish's Review Space: Above and Beyond Episode 3: The Dark Side Of The Sun

The Dark Side Of The Sun was written by Glen Morgan and James Wong and directed by Charles Martin Smith.

uffering nightmares about her parents' death the Wildcards are tasked with defending a helium mining facility. Here she comes face to face with the enemy who killed her family - the Silicates, rebellious AIs who worship chance and gambling. Acting as pirates, the AIs intend to hijack the mined helium and sell it to the Chigs.

Initially successful, they drive the Wildcards back to their troop transport. A counter-attack falls apart and most of the team end up being captured. Hawkes distracts the Silicates long enough with a game of Blackjack for West and Vansen to stage a rescue but Vansen gets cut off, obsessed with finding out why her parents were targeted.

When a captured Silicate informs her that it was pure chance, the flip of a coin, she flies into a rage and rips him to pieces with a knife, before single-handedly taking down a group of Silicates who have the Wildcards pinned. She orders a counter-attack but West stops her, pointing out that they are low on resources and in poor shape. Vansen takes off alone and manages to down the enemy ship with a rocket launcher as they are making off with the helium ore.

backstory is actually interesting enough for us to care about. The Silicates make an effective addition to the Space universe because while the idea of rogue Artificial Intelligence is hardly a new one, the obsession with gambling and chance is at least vaguely original, and the makeup design, cross-hair pupils and artificial flesh torn open to reveal circuitry is very creepy. The little beeps and clicks that let us know that they are communicating wirelessly are simple enough but add immensely to the sense of something inhuman.

Kristen Cloke is very good here. In the pivotal scene, confronted with the fact that her family's destruction, ultimately, meant nothing, she portrays rage and disbelief marvellously and her savagery in dismembering the Silicates is almost frightening. You can get away with a lot of violence on TV if your enemy is robotic and Cloke really goes to town here, without descending into melodrama. Her subsequent rampage of revenge against the Silicates appears to be cathartic, both for the audience and for the character but, in a twist on dramatic convention, Shane gets nothing out of it. She kills all of the AIs on their ship but there are many more out there. Her nightmares have not gone away. I love this because it is real. Far too often drama presents us with something from a character's past that demands closure but rarely is it denied to them, despite how often this might happen in life. At the episode's end Vansen has no more peace than she did at the start.

The other members of the cast get nice moments as well: Hawkes continues to display an interest in 20th Century rock music (there's always one) which gives us a very effective lock and loading scene and, while he has been accepted by the natural-born humans their interractions are still believably awkward. This is conveyed not in cliched "what is this emotion you call love?" scenes but with the other Wildcards laughing nervously at Hawkes' attempt at a joke about the low survival rate of In Vitro gestation or his waking everyone up with his music just to see their reactions.

West is a reliable presence when he is not forced to carry the plot and his pleas to Vansen to let the AIs go are as sensible as they are doomed. It is a testament to their strength as comrades after only three episodes that he can tell her the correct course of action and she cannot bring herself to follow it, and neither resent the other even a little.

The music and atm

osphere of the episode are top notch. Vansen's opening nightmare is given a wonderfully overwrought classical score and a wordy voiceover very reminiscent of similar ones (that Morgan and Wong presumably also wrote) in The X-Files. In another programme this could have come across as hammy but the producers and the actors really make it work. The war setting helps this introspection come across as natural in the long periods of boredom between engagements.

The mining facility is a nice setting, with retro dials, valves and metal corridors that cannot help but invoke Aliens especially in a particularly tense fight with marines hiding behind filing cabinets. Unlike a lot of shows Space often makes an effort to bring us an alien environment and the asteroid, with it's black sky and low gravity (admittedly, spoken of, rather than shown for the most part) is a good stab at this.

While the episode makes a decent go of hanging a lampshade on it with the Wildcards complaining about being sent on a routine mission, it still makes no sense that the military would be using highly trained fighter pilots for sentry duty. From a dramatic perspective it is clear that Morgan and Wong want to have their military cake and eat it too but this stretches believability to breaking point. This is a point that can be made again and again throughout this series but I'm going to leave it here. It's part of the universe of the show and there is no point continually bitching about it. While Space: Above and Beyond is no Generation Kill it does feature enough superficially decent military terminology and practice to distance itself from the average Science Fiction show and anyway, to borrow a joke from 30 Rock "this isn't HBO, it's TV!" 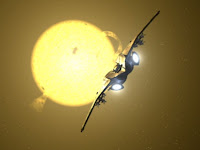 Another attempt to up the military side of the drama is the introduction of several Wildcards who exist only to get gunned down. A war without casualties is, admittedly, not very believable, but neither is being able to tell who is going to live or die based on the opening credits. There are better ways to create drama than the time-honoured dead Red Shirt technique.

The Dark Side Of The Sun is easily my favourite episode so far of Space: Above and Beyond which is a pleasant surprise because I could not remember much about it going in. It performs its duty of showcasing Vansen efficiently enough without resorting to too many cliches and has a darker ending than we might have expected.