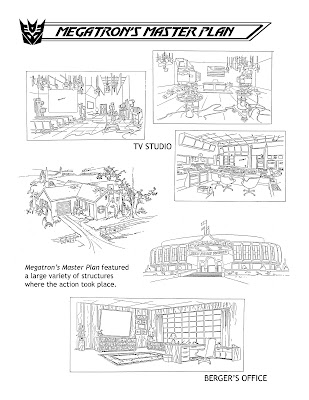 Another week, another Ark Addendum!  I'll admit that I'm not feeling especially creative today, so I'll just pick up from where last week left off.  Yup, Megatron's Master Plan!

As a two-part episode, there were a plethora of models.  This time I look into some of the structures around town, including houses, gymnasiums, Berger's office, and of course the TV Studio where a good deal of the action around the phony Autobot attack took place.

Next week, I'll finish up this episode and the week after, who knows?  Maybe some Masterforce or some Headmasters.
Posted by Jimtron at 10:45 AM