ped back to Earth for stellar two-issue Galvatrion dust-up Fallen Angel we return to Cybertron to find Optimus Prime dug in deep with the Autobot resistance. Simon Furman continues his history of writing sprawling epics, Will Simpson takes over the art in his inimatable style, Annie Halfacree is still on lettering duty with Steve White on colours. Ian Rimmer edits.

The cover, a horrible piece depicting somewhat deformed versions of Optimus Prime and Ultra Magnus battling amid unconvincing flames, was by Martin Griffiths (who should be ashamed of himself) and coloured by Robin Boutell (who did the best he could).

Summaring the first couple of pages of this issue is pretty tricky because they use the well-worn, but welcome here, narrative trope of having a narrator tell an "embellished" story of a past event to his disapproving superior. Here we have Octane acquitting himself very poorly during a surprise Autobot attack on an Energon processing plant. I like this approach for three reasons, 1) it is very funny, 2) it makes a good use of a limited page count to give us more bang for our buck and 3) it is one of the narrative techniques that comics can do best. A novel cannot really do it at all, and while it is possible on screen, it feels more natural in a 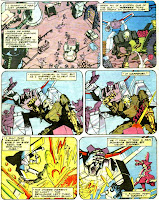 comic where narration is part of the form. Furman has returned to this technique at least once more - in a Transformers: Energon story he wrote for the Dreamwave Summer special back in 2004. (Slight nitpick - why does Octane back off from using the word "slave" - Straxus doesn't seem to be the hearts and minds sort...)

It turns out that Octane's plight is not an isolated incident and that the presence of Optimus Prime has greatly emboldened the Autobot resistance. Straxus is having to deal with this problem, combined with the fact that Megatron is becoming more and more erratic. We see him talking to his technicians who are working on a mysterious machine that he says will crush Megatron and free him fr

Meanwhile, the Autobots are celebrating another victory. Optimus Prime gives them words of encouragement but warns them that he must soon return to Earth because the Decepticon threat there is an ever-present danger. Prime intends to deal with Megatron's presence on Cybertron and then leave. Ultra Magnus wants to accompany him, but Optimus will not allow it. Their conversation about Magnus's last time on Earth segues effectively into...

The Earthbound Autobots discussing their recent Galvatron encounter. The Autobots from last time have made it back to the Ark but their news is not exactly warmly received, especially by Ironhide, as everyone is tense following Optimus Prime's apparent death.

Back on Cybertron, Straxus taunts Megatron about his inability to destroy Optimus Prime and tells him to return to Earth, as there is no place on their homeworld for him any longer. Megatron, seeing Straxus as powerless, of course refuses. Straxus catches him by surprise by activating the device from earlier. Megatron is blasted with a ray from Straxus' tank and writhes in agony. Straxus explains that the device will allow him to swap bodies with Megatron and commands him to surrender!

Megatron tries to fight it but seemingly cannot. As the effect fades, Megatron's body smashes open the glass tank and destroy's Straxus' head, but who is in control of Megatron? Find out next time!

Despite returning to the Cybertron setting, which had been a bit wobbly in recent issues, this is a solid story. The tension between Straxus and Megatron is natural and entertaining. While the body-swap doesn't make much sense for a species that reformat and rebuild themselves on a regular basis, it does neatly dispose of Straxus' Megatron problem and introduce a new scifi element into the universe.

The Optimus Prime strand doesn't take any risks but makes sense given the situation. We are used to seeing Prime fight with one servo tied behind his back, as he has to ensure that no harm comes to any humans. Now he is back on Cybertron he is leading from the front, laying Decepticons waste left and right, and acting as a beacon of hope. I have a little trouble with this big change after four million years of stalemate but then, the four million year time jump was always the biggest dramatic problem with any storyline that wanted to include Cybertron as well as Earth and more recent continuities have quite rightly abandoned it.

The Earth pages are merely there to say "Remember, this is happening too!" but they are effective for that, showing us a storyline with threads that stretch across the galaxy. F

urman knows that the most effective way to do epic is to have a lot going on. The storylines are simple enough, but they have big implications for the status quo, and for that reason we are interested in the outcome.

The art, despite being by Will Simpson, who I have ragged on mercilessly in the past, is pretty good. I still dislike his Megatron but he is undeniably good at crafting detailed backgrounds and lived-in looking locations and is therefore a good fit to show us Cybertron, especially Octane's little escapade, as shown above. The mind-swap scene is also extremely disturbing. Take a look:

Maybe not quite reaching the heights of Fallen Angel this is still an interesting and effective issue. The Straxus/Megatron switch should have very interesting consequences in the immediate future.
Posted by Bishbot at 1:45 PM

I <3 this site and these fantastic write-ups...keep 'em coming!