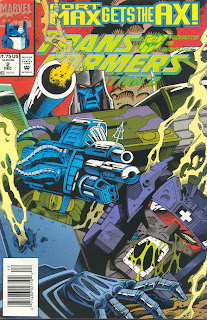 The second issue of the Transformers G2 run of Marvel Comics is titled All or Nothing.  It wraps up the G2 prelude story begun in the pages of the GI Joe ongoing book.  It's written by Simon Furman, with pencils by Derek Yaniger, Manny Galan, and Andrew Wildman.  Amash, Severin, and Baskerville provide the inks.  Starkings w/ Gaushell provide the letters (Letterbots, they're called.)  Mossoff is the Colorbot.  Editors Rob Tokar and Tom DeFalco are credited as All and Nothing, respectively.  The cover, as indeed all of the G2 covers are, is by Derek Yaniger.

The cover features a rather dangerous looking Megatron, kicking the crud out of Fortress Maximus.  "Fort Max gets the Ax!" it declares.  He, ummm, he does, so truth in advertising here.   While I've definitely warmed up to Yaniger's style, this piece isn't one of his better ones.  It's certainly dramatic, which I like, but the perspective / anatomy on Fort Max's hand seems off, and Megatron has a kind of unfinished look about him.  Things like the gun and Max's head are superbly rendered, but Megatron's torso lacks comparable detail.  I do rather love how the smoke from Megatron's shoulder canon obscures the lettering a bit.  I really want to love this cover, but I just can't quite bring myself to do so.

Since this book isn't picking up from G2 #1 but instead from GI Joe #142, there's more recap than usual.  We kick off with a one page summary designed to lay out most of the key players on Earth, then shift over to Megatron for a triumphant bit of expository gloating.  "I beat them ALL!" he declares, a bit prematurely as it turns out.  There are enemies on board, one human, Spike Witwicky, and one Autobot, Skydive.  Spike and Skydive have a brief misunderstanding before it's revealed that Spike is, in fact, Fortress Maximus.

Megatron works on some kind of project that looks suspiciously like Starscream, wondering to himself if this course of action is 'sheer lunacy.'  I'm sure Starscream's inclusion was mandated by Hasbro, hence Furman's lampshading of this action.  "I still can't believe I'm actually doing this!" he muses.  Me neither, Megatron.  His thoughts are interrupted by Fortress Maximus, who engages Megatron while Skydive spirits Dr. Biggles-Jones to safety.  Skydive can't just abandon his colleague, though, and Max needs all the help he can get.  Megatron shreds him pretty effortlessly.  There's some mental back-and-forth between Max & Spike, echoing the events of issue #79.  In the end, Max sacrifices himself, throwing his battered form into the antimatter conversion chamber to destroy the ship and, presumably, Megatron.  Spike is given an out, but doesn't take it.  Megatron, with seconds to spare, heads somewhere with purpose.  The ship goes, um, what's the technical term, Sidney?  She can't remember, but Skydive offers a helpful 'Bang.'

On Earth, things are no less tense.  Cobra Commander's trailer full of junk must be dealt with.  Hot Spot engages the Cobras and blows them to smithereens!  Guh?  Excuse me?  I know that G2 has a different tone than G1, but it's still odd for this shift in character of the Autobots.  Snake-Eyes and Hawk help out, which is a nice touch.  After all, this storyline began in GI Joe, it'd be odd if those protagonists simply stopped mattering at all.  (It also sets up some nice stuff for later, but we'll get to that in a few issues.)  Hot Spot succeeds in blowing up the truck (Great lettering, Starkings!) but he's completely spent.  Rather than be disassembled by Cobra, he blows himself up, which is echoed by Max's sacrifice a page later.

Both storylines end together with Skydive, Hawk, Scarlett and Biggles-Jones share a silent moment.  With no concept of Death, wonders Skydive, is the loss of a colleague easier or harder?  Who can say?  Hawk salutes as they stare off into the sky.

I have mixed feelings about this issue.  On the one hand, I really did love the G2 plotline in GI Joe, at least when it first came out.  On the other hand, this issue suffers from some structural and artistic flaws.  Let's start structurally.  The previous issue, #1, established a great cosmic threat.  This issue, however, ignores that and focuses entirely on Megatron and Cobra.  It needed to be done, after the set-up from Joe 138-142, but tonally it doesn't match what the book has been set up to be.  It's a shame that this story wasn't told entirely in the confines of GI Joe.  In retrospect, I think that artistically G2 would have stood taller had the Joe crossover not happened.  The events of the Joe book felt too much like G1, and the events here as an odd muddle of G1 and G2. 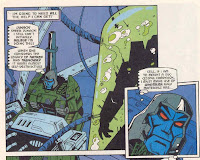 It is clear to me that Furman is just moving the pieces around, shifting them to where they need to be from where Hama left them to where he wants to take the story.  The use of Spike, so shrewdly done in The Last Autobot, here feels somewhat out of left field.  Sure, he popped up in Joe #142, but this is his swan song.  I feel like more time could have been devoted to him.  Recalling his triumph in #79 should have been shrewd but just makes this story pale in comparison  He's an odd piece to move off the board, since of all the Transformers he's the one who could most reasonably sit out on action.  Meanwhile, Starscream is moved INTO play, which just doesn't seem like something Megatron would do, but I've already ranted about that.

Hot Spot, too, seems way out of character.   He's a Protectobot, for God's sake!  In the entirety of the US run, I can't think of one instance of the Autobots purposefully using lethal force on a Human, but here it's done with nary a second thought.  I don't mind a grittier tone, but this shift should have been after character development and soul searching.  Instead it's treated as if this is always how the Autobots have operated, and it isn't.  (More great art/letter interaction here, by the way.)  Oh, and Furman's Cobra Commander doesn't hold a torch to Hama's Cobra Commander.  "Bring me his... cab!" and "I'll have your heads!  After I've had your fingers, your toes, your --" just reads like generic bad-guy dialog.  Hama's CC was a virtuoso of vocabulary, this guy sounds like a thug.  He even seems to be at a loss for words... that's just not right.

Moving on, we get to the art side of things.  Yaniger proved unable to meet his deadlines, causing them to call in two ringers for this issue.  Manny Galan tried to match Yaniger's artwork, Andrew Wildman did not.  Hence, we have two and a half different styles all in one book.  Additionally, Yaniger's artwork isn't as strong as it was last time.  I'm guessing he was more rushed, but the lack of detail seems lazy this time rather than stark.  I do love seeing more Wildman, as he's probably my favorite TF artist from the era, but it still feels out of place.  Galan, on the other hand, just does a bad Yaniger.  He'll do much better when he allows himself to draw in a way more natural to himself.  As much as I've warmed up to the art style in G2, this just isn't a good example of it.

So, what's the verdict?  It's a necessary issue, concluding 4 or so issues of set-up from another in-continuity book, but overall it's probably the weakest issue Furman's penned to date, at least in the US.  The writing flaws are bad, but combined with the artistic flaws and you have a book that's only really worth reading so that other books make sense.  As a stand-alone story, it sadly fails.  All or Nothing was reprinted in the Titan collection   Transformers Dark Designs

, which is out of print but not too pricey on Amazon.com.
Posted by Jimtron at 12:30 PM

Wildman's inclusion (out of place or not) is all the more frustrating by the fact that his pages in this issue are almost entirely Transformer-free (and certainly he doesn't get to use the TFs in robot mode).

I never liked how Fort Max and Hot Spot were written out, really.

More than that, however, it drove me absolutely bonkers at how the artist for Fort Max's parts seemed to have NO idea about the character-- particularly, his sheer size and the existence of Cerebros.

John D.: While I agree, I think they tried to touch on that by having Megatron do some serious damage to him, previously and off-panel.

And why didn't Skydive recognize Spike? I mean, he seemed to know him well enough back in TFG1#50 to know that finding Buster meant that they should contact Fortress Maximus...

As for Starscream, I thought we saw him talking to Megatron back at the start of G2 in GI Joe?

And I wish Wildman had been allowed to use his style. Heck, I wish he'd done the entirety of G2... or at least, I wish we had a chance to see how it would look in his style, plus the appropriate "grittiness."

...whew. So much crazy going on in one book.

Good point, LBD. We DID see a shadowy figure talking to Megatron back in GI Joe #138. It's not confirmed as Starscream, but really who else could it be? That's another continuity hiccup from that book to this one.

I never managed to get hold of issue 2 of Generation 2, which, followed by not being able to find issue 3 either, led to my rapid disinterest in the comics. The artwork here is worse than the first issue (if that is at all possible). I hated the "grittiness" because it just looked messy. Furman clearly was written into a corner by Hama, and this issue just feels like a kid throwing a tantrum.

And I also don't get why he had to have the Autobots so badass, without any remorse. Hotshot was practically a fireman, when did he become an assassin?

The toys may have been day glow monstrosities, but the comic was just a grungy waste of ink IMO.

I have to say I've never had a problem with Hotspot killing Cobra troops. It is out of character, I suppose, but they're Cobra. Arguably the Autobots should have been this sensible all along...

"Andrew Wildman did not"
He did. Look how crappy it looks! :P

"And I also don't get why he had to have the Autobots so badass, without any remorse. Hotshot was practically a fireman, when did he become an assassin?"