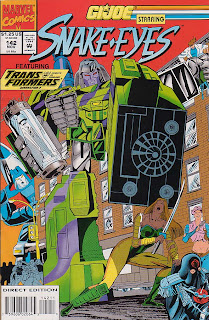 The final issue of the Generation 2 prequel, exploding into the pages of the ongoing G.I. Joe book, is appropriately enough titled Final Transformations.  As usual, it was written by Larry Hama.  Art duties were split up quite a bit. Jesse Orozocoe and William Rosado did pencils.  Chip Wallace, Tim Tuony, and Arienne Alexandron did inks.  Colors were by Andre Ani and Chi.  (Yes, the same Chi who would color for Transformers G2 and be a staple of the Transformers fan art scene for years.  I like Chi's work a lot.  Feel free to go check out his deviant art page.  Go on, I'll wait.)  Letters were by Rick Parker.  The cover art was by Rosado.

The cover leaves a lot to be desired.  It picks up almost exactly where the last issue left off, with Scarlett squaring off against Megatron for the safety of Biggles-Jones.  The only thing new is Skydive, peaking out at Megatron from behind a building.  So, it's fairly unambitious, but the actual quality of the rendering also leaves much to be desired.  Scarlett looks flat and unappealing, and her head seems way too small for her body.  Cobra Commander is apparently unconscious on the street, that or highly disinterested.  Zarana seems gleeful, and Megatron's anatomy just looks awkward.  The whole thing is just uninspired. 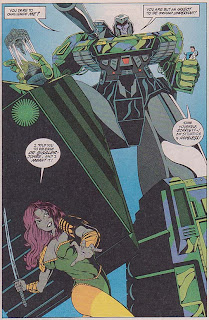 To add insult to injury, the opening splash page is almost the same image, only much better rendered.  I'm assuming this is Orozocoe artwork, given the difference in quality.  I mean, compare Scarlett here to Scarlett on the cover.  It's night and day.  The angle is also a lot more dramatic, with the sun behind Megatron's head making him appear truly titanic.

In any event, thanks to the telegraphing from the cover, there's little surprise when the page 2-3 spread turns out to be a team of Autobots, converging on Megatron like an angry swarm of bees.  They're also about as effective as bees would be against a man, annoying but not particularly threatening.  Before too long Skydive is grounded, Steeljaw blasted to pieces, and a miscolored Chase crippled.  The other Autobots withdraw to regroup.  This serves to showcase how hard Megatron has become, but I'm not sure I buy how weak the Autobots are.  If Megatron was really such a threat, why wouldn't Optimus send more men?  I get that he's been upgraded, but is he really that much tougher than before? 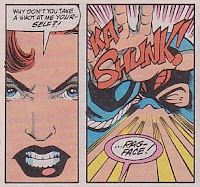 Let's not forget that this is a Joe book, though.  Scarlett eviscerates a frag viper (and with him, whatever shreds of her cover were left) for his weapon right in front of Cobra Commander.  He jumps her while paraphrasing Shakespeare. (I do love the intellectual bent Hama gives good ol' CC.) Scarlett's banter is much more lowbrow, but it's still fun.   "They can't understand you!  You've got a street in your mouth!"  Snake-Eyes, too, was in a pickle, one that he gets out of by dropping a handful of grenades on the floor.  Sure enough, the many armed guards pointing weapons at him flee for their lives, allowing him to dash out a window.

While normally I'm not a huge fan of the omnipotent ninja, Snake-Eyes here seems to balance his bad-assery with a certain realism that makes him appealing.  Maybe it's that he's been around before Ninja were over-played. In any event, the two plots intersect when Snake-Eyes rescues Scarlett and sends Cobra Commander and Zarana running. I do rather enjoy these characters, and don't have a hard time seeing why they're so beloved by Joe fans.  Hama really does a great job here. 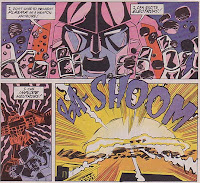 The Autobots are having a much worse time than the Joes, though.  Brawn, busy guarding their interstellar transport, gets the drop on Megatron, but once again his new abilities prove to be amazingly powerful.  He ignites a neutron implosion, destroying Brawn and the ship alike. The three surviving Autobots realize that their only way off the planet is now the Ark, and concoct a new plan.  With some help from Spirit and Storm-Shadow, they deactivate Skydive and truck him onto the Ark without tripping the alarms.  Unbeknown to them, they've got an extra hitchhiker, the intrepid Spike.  Override provides a diversion, but it's pretty clear that he's outclassed.  It's not at all clear where Hot Spot is during all of this, either.  His plot thread will be picked up later, but his absense from the last third of the book is pretty strange.  Really, it's not a great plan.  Get Skydive onto the Ark and... what, exactly?

Override's sacrifice does more than provide a distraction, though.  He allows Biggles-Jones to escape from Megatron.  I do love how battered and bruised she is after her ordeal at his hands.  When becomes clear that Megatron will pursue the Joes for as long as they have Biggles-Jones, she sacrifices herself to save the others.  Override's example has inspired her.  Megatron, thus armed with what he desired and on the radar of the Autobots, wastes no time in boarding the Ark.  Cobra Commander shrieks that he's owed more technology, that they had a deal.  Megatron is unimpressed and departs.  He is, though, somewhat impressed with Biggles-Jones, for the audacity she displayed by attempting to corrupt him with a virus encoded into his rail gun operating system.  Though he doesn't say so, I suspect that her bravery in turning herself over to his custody impressed him as well.    The book ends with him musing that he may yet be able to turn her talents to his ends.

It's kind of a strange book.  Most of it is devoted to a rather one-sided fight between Megatron and a team of Autobots.  While I was expecting to be swept away by this action, I found it rather implausible.  I suppose the threat of the G2 Decepticons has Autobot resources stretched pretty thin, but even then the Autobots come across as a disorganized rabble.  They had the drop on Megatron with 7 guys, and still get routed.  Then they regroup and their next best plan is to sacrifice one of their own to slip a single agent onto Megatron's ship?  Meanwhile Brawn splits up and dies alone.  If they were worried that Megatron would find their ship, why not regroup... at the ship!  Ugh. 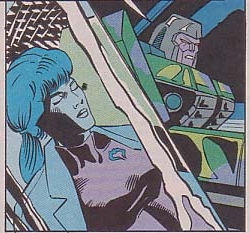 The character of Doctor Sidney Biggles-Jones almost completes her journey here.  She started out 8 issues ago as a hot-shot scientist.  Captured by Cobra, she seemingly enthusiastically joins up, though in reality she seems to be a double-agent working for the NSA.  However, she pique's Megatron's interest and eventually winds up going off with him more-or-less willingly to save her friends.  I'm not really sure what the point of her was.  Perhaps she had some other grand destiny, subverted by the whims of a toy company prepping for the relaunch of Transformers.   I would have liked to see her grow more as a character within the Transformers Universe, or even in the Joe universe, but alas, it's not to be.

Those flaws aside, this book (and the three preceding it) does effectively reintroduce the concept of Transformers.  They stride like colossi, with larger than life bodies, personalities, and conflicts.  Their agenda is cosmic in scope, and where they walk chaos follows.  We've also got some specific plot threads set up for G2, mostly around Megatron's return.  For all that this book may suffers from splitting the focus between the Joes and the Transformers, it's pretty certain that the main G2 book won't have any similar flaws.  I'm looking foward to it.

The G2 prequel has yet to be reprinted, which is still a real shame.  Perhaps IDW, which has the rights to both, is up to the challenge?  Still, the back issues don't go for all that much, so if you're a die-hard G2 fan then why not try to scrounge them up?  It's not a perfect story, but it's an enjoyable tale that continues directly a few issues later in G2 #2.  Stick around, it's about to get real.
Posted by Jimtron at 11:37 AM

I still feel that with this storyline, the GIJOE comic never really recovered its momentum and just sort of limped on for another 13 issues, one of which was even an unused script from way back in the first year repurposed.

It's only slightly less disheartening than the "Alternate" Joe Timeline when they surely must have all been vaporized by the Warworld. I like to think though that the Joe's and Oktober Guard took a few con's down with them in that world though.

Seeing this on the shelves gave me such joy back in the day, spoiler cover aside, and it's great to see it get the appreciation it deserves.

But dude, it's OverRIDE, not -run. Seriously!

Sorry, I just have a strong loyalty to the '88 TFs, and didn't like seeing a Triggerbot casually offed here much better than when IDW killed Dreadwind and Quake(?)

Any idea about Hama's rationale for using/killing who he did here? Furman must have given him notes on what to do with Hot Spot and Skydive, but I wonder about the others, especially since killing Brawn here poses a violent break from TF:TM continuity, though hardly the first. And poor, poor Steeljaw...first the Universe snafu, and now he's denied any proper appearance in an American TF book.

I'm not sure why Hama used the characters he did. Of them, only Skydive would be released as a part of the G2 line. Of course, he's the only one who ultimately survives, so that might not be a coincidence.

As for killing Brawn, though, I kinda think that that Movie train has already sailed. After all, Unicron's already come and gone, so we're pretty clearly not on track for that particular future.