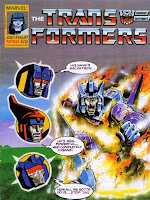 el Part 2 sees us return to the battle between Galvatron and... well.... everybody else. Naturally it was written by Simon Furman but this time the art duties were handed to Jeff Anderson. Annie Halfacree lettered, Steve White coloured, and Ian Rimmer edited it.

The cover is all Geoff Senior and is sort of half brilliant. The depiction of the burning Galvatron could scarcely be more dramatic but the talking heads are, once again, too cute, and go for humour that doesn't work. A mostly great cover that I basically hate for what it could be and isn't. Sorry Geoff.

We open with a page-long explanation of the events of the preceding issues then find that the Dinobots have well and truly joined the battle against Galvatron but even with the weight of numbers are only just holding their own. Blaster transforms to ghetto blaster mode and tries a more powerful burst of the same sonic attack that disorientated Galvatron last time. It angers the future Decepticon, causing him to charge at the defenseless Blaster, who is whisked away, into the sky, by Swoop.

Blaster apologies for messing up, but in a nice sequence of panels, Swoop explains ho

w the distraction allowed the other Dinobots to co-ordinate and redouble their attacks.

Meanwhile, Shockwave arrives at the periphary of the fight with his Decepticons. Soundwave theorises that Galvatron is here to usurp Shockwave as the Decepticon leader as he sought to do with Megatron last time. Shockwave comes to the unappetising, but logical, conclusion that his leadership might depend on him aiding the Dinobots.

Galvatron rallies disappointingly quickly from the Dinobots' assault and starts pounding them, and Blaster, again. He takes Swoop out with a well-placed particle cannon blast and Swoop finds himself beside the shattered shell of Centurion, unable to move. He is reflecting on his ignoble fate when he suddenly hears a voice inside his mind. Professor Morris, who previously took control of Swoop before he was granted Centurion, has re-established their mind link.

damaged Swoop to let him take control once more, to bypass the concussion that has knocked him for six and let him fight back. Swoop is resistant, remembering the terrible things he was forced to do last time, but eventually relents. Morris/Swoop's attack distracts Galvatron for long enough from killing the Dinobots for long enough that the Decepticons arrive and drive him off.

The combat at an end, Shockwave pauses only to deliver a warning that when Galvatron returns and destroys the Dinobots the Decepticons will return to emerge triumphant.

Another great issue. Who knew that Furman could make what is essentially a two-issue long brawl in a field into one of the most suspenseful stories of the Marvel run so far? The stakes were raised as soon as Galvatron entered the fray but now he's in the wind, escaped somewhere on Earth, and you just know that when he comes back, it'll be a big deal.

Furman deserves praise for utilising the somewhat paradoxical fact that good recurring characters make a comic's universe feel larger and giving Professor Morris another believable chance at redemption for the murder he committed with Swoop's body. This is a great moment for Swoop as well, as we discover just how far he'll go to save his friends. He has

every reason to refuse Morris but cannot let Galvatron win. Of course, Morris is deeply regretful and on the level here, but Swoop had no reason to trust that.

Furman keeps the story moving fowards at a breakneck pace and manages to deliver us some good character stuff as well but the hero for this story is really Jeff Anderson who manages to give us page after page of varied and easy to follow robot fisticuffs. The Transformers in these books might not be photo-realistic but the fight scenes really flow and, more importantly, tell a powerful story, which I think is a skill that has been partially lost among some of the more detailed modern comic-book art styles. I loved Geoff Senior's work in Part 1 but I cannot honestly say that he would have done a better job with Part 2 than Anderson did. For continuity I might have liked it, but otherwise, Anderson hits it out of the park here.

If you can find the Titan collection, read this story! We're back on Cybertron next week with Resurrection.
Posted by Bishbot at 1:18 PM

I remember this story fondly from my days of trying to piece in my UK collection of Transformers back in the mid 80's. Galvatron was the cream which made the Furman run more appetising (talk about stretching a metaphor) than the garbage that the US title was churning out. The time travel plots, and making the movie relevant, just seemed to add depth and I loved it. It didn't hurt that while in the US less than 10% of the toys made it into the issues, in the UK almost 75% were used (if sometimes only for one panel and eventually invalidated by the fact the US issues ignored UK continuity entirely).

My only real regret about that era is that the US TV show and the US comic wasn't inspired more by the British continuity. At least then we wouldn't have had to suffer the idea that the quintessons created the transformers - sigh.

While I am a big fan of the US title and would argue strongly against calling it "garbage" I do agree that the UK plots felt a little more consequential at this time.

Afterdeath! is a pretty big deal, for the overall storyline, but the tone makes it feel lighter than stuff like Fallen Angel, although the UK comic is not without its flaws, as you can see in my reviews of Prey! etc.