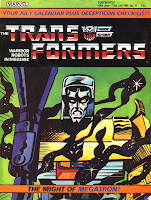 A bonus review today. The parts of this story are so short, and I’m bored with reviewing so few pages at a time, so you get this last part nearly a week early - lucky you.

The writing and art team are once again unchanged. We have Simon Furman finishing off his second Transformers saga and Mike Collins and Jeff Anderson bringing it to life. Gina Hart’s colouring adds an air of quality to four of its five pages.

While the cover is a distinct improvement over the last two - depicting an angry looking Megatron swathed in a mysterious black energy - its impact is slightly lessened when you open the book and find the exact same image on page one. Still, it makes Megatron look both evil and powerful, which is a good look for him.

Megatron and Optimus Prime begin the issue still held captive by Auntie, but while they wait, Megatron has a trick up his sleeve. “Incredible!” says Optimus, “He’s actually doing it! He’s tapping the energy of a black hole in space!” This dangerous manoeuvre might just get them free. While Megatron concentrates on this, Ravage and Windcharger (somehow) get into the chamber with Auntie. Windcharger, despite his diminutive size, manages to punch Guardian out. Ravage leaps and... collides with Auntie somehow in such a way that disables her. Free of her magnetic grasp, Megatron prepares to bring his as yet unused black hole power to bear on Optimus Prime but Windcharger manages to muster an extremely powerful magnetic field and hurl him through the ceiling of the Ark and into the sky. Windcharger collapses and the Decepticons retreat, but they leave an ominous message cut into an Ark bulkhead: “We’ll be back.”

I have to admit to being slightly disappointed by the conclusion to this saga. Having both Guardian and Auntie dealt with by the end of page two seems something of a copout, considering the menace they posed in the last issue. Guardian looked to be vastly larger and more powerful than Windcharger, but we don’t see how the little Autobot got the better of him. Similarly, it is very difficult to see exactly what Ravage manages to do to Auntie. Obviously he somehow damages her circuitry, but the art is not entirely clear as 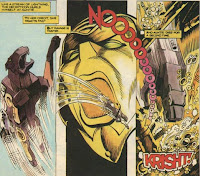 to how. Windcharger’s last desperate use of his magnetic power to expel Megatron before collapsing is good drama, undermined slightly by having him up on his feet again by the next panel. I can pretty much forgive Furman for all of this, however, when you consider that the whole story was only twenty-two pages, and he was supposed to deliver three cliff-hangers and a proper ending. It required some seriously truncated story-telling, that was not really apparent until the very end. The whole story is a brisk and enjoyable read, but ultimately lightweight, and of uncertain continuity. The note at the end seems to admit this - making a point of demonstrating that the next story will pick up from Issue #8, which is the end of the first US mini-series. This would have been very odd for the UK reader, who would surely have been wondering what had happened with Shockwave throughout these three unrelated stories. One item of note that I did like is the use of Megatron's black hole power. It was mentioned on his toy bio, and Furman did like to use it occasionaly as a weapon of last resort. I'm not sure exactly how one connects with a black hole in space, but its a concept I wholeheartedly approve of.

The art continued to be perfectly adequate to tell the story. I very much liked the image of Megatron used for the cover and Ravage’s leap through Auntie’s mouth is

visually striking, if a little confusing. The lone black and white page, while still regrettable, has an excellent use of shadows by Jeff Anderson in order to create a very ominous tone. This is appropriate, because even though the next issue does not follow on from this, it does show the Autobots in a very bad way indeed.

These issues have never been reprinted, not even in the collected comics editions of the early nineties, and its difficult to care. Its a readable enough story, thanks to the skill of Simon Furman and Mike Collins, but it is ultimately very slight and disposable. It stands in sharp contrast to the chaotic events depicted in the US comic at the time. This is something of a shame, because I rather liked the character of Auntie, and having the Decepticons invade the Ark had potential for excellent drama. Unfortunately the comic was, at that time, bound by the whims of its cousin over the pond, and therefore this story was merely designed to fill in time, destined to be forgotten almost as soon as it was published.
Posted by Bishbot at 2:20 PM

Not sure what's going on with Ravage and Auntie, either. It kinda looks like he's jumping into her mouth, actually. (Paging Dr. Freud!)

I agree: Windcharger's single punch takedown of Guardian was very disappointing. I remember reading the later story 'The Wrath of Guardian' (where the Omega-class battle droid takes on and clobbers all the Dinobots) before this one - and a good thing too, or else I wouldn't have found Guardian such a menacing prospect.

Still, kudos to Furman for taking a two-panel object (essentially just another obstacle for Windcharger and Ravage) and building a whole new story around it.